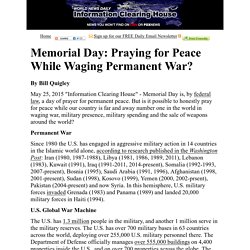 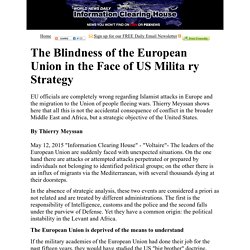 Thierry Meyssan shows here that all this is not the accidental consequence of conflict in the broader Middle East and Africa, but a strategic objective of the United States.   Paris Is A Warning: There Is No Insulation From Our Wars :  Information Clearing House. The attacks in France are a blowback from intervention in the Arab and Muslim world. 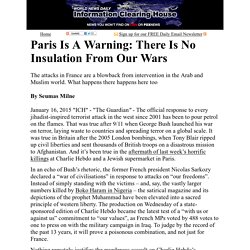 What happens there happens here too By Seumas Milne January 16, 2015 "ICH" - "The Guardian" - The official response to every jihadist-inspired terrorist attack in the west since 2001 has been to pour petrol on the flames. That was true after 9/11 when George Bush launched his war on terror, laying waste to countries and spreading terror on a global scale. It was true in Britain after the 2005 London bombings, when Tony Blair ripped up civil liberties and sent thousands of British troops on a disastrous mission to Afghanistan. “Civilization” of the Neocons -:  Information Clearing House. By Peter Koenig “We shall require a substantially new manner of thinking if mankind is to survive.” 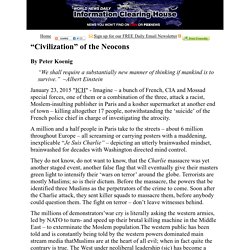 ~Albert Einstein January 23, 2015 "ICH" - Imagine – a bunch of French, CIA and Mossad special forces, one of them or a combination of the three, attack a racist, Moslem-insulting publisher in Paris and a kosher supermarket at another end of town – killing altogether 17 people, notwithstanding the ‘suicide’ of the French police chief in charge of investigating the atrocity. A million and a half people in Paris take to the streets – about 6 million throughout Europe – all screaming or carrying posters with a maddening, inexplicable “Je Suis Charlie” – depicting an utterly brainwashed mindset, brainwashed for decades with Washington directed mind control.

They do not know, do not want to know, that the Charlie massacre was yet another staged event, another false flag that will eventually give their masters green light to intensify their ‘wars on terror’ around the globe.  The Troops Are Destroying Our Country   :  Information Clearing House. By Jacob G. 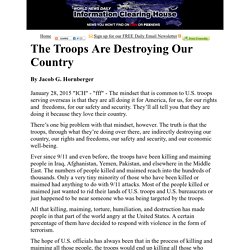 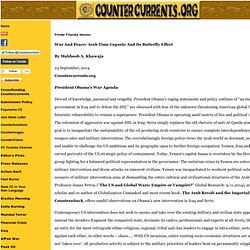 Khawaja 24 September, 2014Countercurrents.org President Obama’s War Agenda Devoid of knowledge, paranoid and vengeful, President Obama’s raging statements and policy outlines of “an inclusive government in Iraq and to defeat the ISIL” are obsessed with fear of the unknown threatening American global hegemony and futuristic vulnerability to remain a superpower.

Contemporary US intervention does not seek to secure and take over the existing military and civilian state apparatus; instead the invaders fragment the conquered state, decimate its cadres, professionals and experts at all levels, thus providing an entry for the most retrograde ethno-religious, regional, tribal and clan leaders to engage in intra-ethnic, sectarian wars against each other, in other words – chaos….. Stephen Lendman (“Obama Threatens War on Humanity.” Permanent war is official US policy. War & Peace. Home and Away: Iraq and Afghanistan War Casualties. United States military casualties of war. This article lists the United States of America's military dead, wounded, and missing person totals for wars and major deployments. 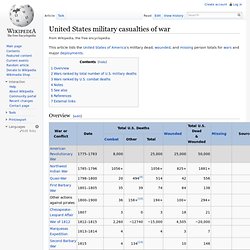 Overview[edit] Wars ranked by total number of U.S. military deaths[edit] US Interventionism Has Failed, But… May 31 2014 "ICH" - "China.org" - Yet in his commencement address at West Point delivered on May 28, Obama repeated the threadbare claim that "the United States is and remains the one indispensable nation," and that "America has rarely been stronger relative to the rest of the world. 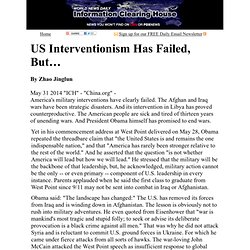 " And he asserted that the question "is not whether America will lead but how we will lead. " He stressed that the military will be the backbone of that leadership, but, he acknowledged, military action cannot be the only -- or even primary -- component of U.S. leadership in every instance. Parents applauded when he said the first class to graduate from West Point since 9/11 may not be sent into combat in Iraq or Afghanistan. Obama said: "The landscape has changed:" The U.S. has removed its forces from Iraq and is winding down in Afghanistan. 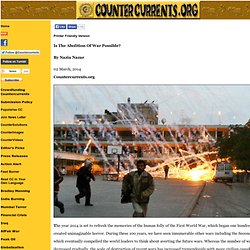 By Nazia Nazar 02 March, 2014Countercurrents.org. The Punishment Does Not Fit the Crime. When Bryan Stow was nearly beaten to death at a Dodgers' baseball game in 2011, he may have wished he had been killed. 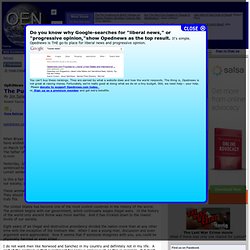 The 45-year-old former paramedic was leaving the stadium on March 31st and was attacked from behind by two men, Louis Sanchez and Marvin Norwood. The father of two is now brain damaged and is permanently disabled. His life, as he knew it, is over. Yesterday, 2/20/2014, the attackers were convicted in a Los Angeles court. Norwood was sentenced to four years with credit for time served. Good advice, wrong address: Russia responds to Susan Rice ‘no tanks to Ukraine’ warning. By RT February 25, 2014 "Information Clearing House - "RT" - Russia sees merit in the advice against use of force in Ukraine which US National Security Adviser Susan Rice voiced, but believes it was wrongly directed towards Moscow.

In this case I'm talking about a movement to end, not this war or that war, but the institution of war as an acceptable enterprise for the human species. The declaration of peace that people and groups are signing reads, in its entirety: "I understand that wars and militarism make us less safe rather than protect us, that they kill, injure and traumatize adults, children and infants, severely damage the natural environment, erode civil liberties, and drain our economies, siphoning resources from life-affirming activities. I commit to engage in and support nonviolent efforts to end all war and preparations for war and to create a sustainable and just peace.

The poll of 67,806 respondents from 65 countries found that the U.S. won this dubious distinction by a landslide, as revealed in the chart below. The BBC explains that the U.S. was deemed a threat by geopolitical allies as well as foes, including a significant portion of U.S. society. Predictable in some areas (the Middle East and North Africa) but less so in others. Hiroshima: Dropping the Bomb. Congress Must Not Cede Its War Power to Israel. Source: Future of Freedom Foundation (image by American Free Press) The American people should know that pending right now in Congress is a bipartisan bill that would virtually commit the United States to go to war against Iran if Israel attacks the Islamic Republic.

"The bill outsources any decision about resort to military action to the government of Israel," Columbia University Iran expert Gary Sick wrote to Sen.