Have You Installed The uWarrior Trojan Horse By Mistake? Here's How To Find Out. Another day, another Microsoft Office vulnerability so big that cyber-criminals can drive a truck through it. 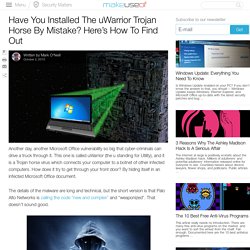 This one is called uWarrior (the u standing for Utility), and it is a Trojan horse virus which connects your computer to a botnet of other infected computers. How does it try to get through your front door? By hiding itself in an infected Microsoft Office document. The details of the malware are long and technical, but the short version is that Palo Alto Networks is calling the code “new and complex” and “weaponized”. That doesn’t sound good. Despite Microsoft having issued a patch for this hole back in April, many people have not updated their version of Office, especially the Enterprise versions. So How Does This Trojan Present Itself? 5 Safe and Clean Places to Download Free Apps. Finding free software shouldn’t be hard, and it shouldn’t come with risk. 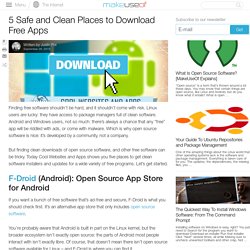 Linux users are lucky: they have access to package managers full of clean software. Android and Windows users, not so much: there’s always a chance that any “free” app will be riddled with ads, or come with malware. Which is why open source software is nice: it’s developed by a community, not a company. But finding clean downloads of open source software, and other free software can be tricky.

Today Cool Websites and Apps shows you five places to get clean software installers and updates for a wide variety of free programs. F-Droid (Android): Open Source App Store for Android If you want a bunch of free software that’s ad-free and secure, F-Droid is what you should check first. You’re probably aware that Android is built in part on the Linux kernel, but the broader ecosystem isn’t exactly open source: the parts of Android most people interact with isn’t exactly libre. 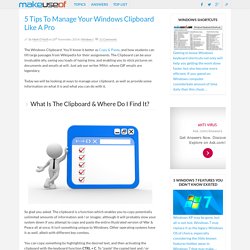 You’ll know it better as Copy & Paste, and how students can lift large passages from Wikipedia for their assignments. The Clipboard can be your invaluable ally, saving you loads of typing time, and enabling you to stick pictures on documents and emails at will. Just ask our writer Mihir, whose GIF emails are legendary. Today we will be looking at ways to manage your clipboard, as well as provide some information on what it is and what you can do with it. What Is The Clipboard & Where Do I Find It? So glad you asked. You can copy something by highlighting the desired text, and then activating the clipboard with the keyboard function CTRL + C. The Clipboard does have its limitations though.

What's The Difference Between Windows 8 & Windows RT? [MakeUseOf Explains] With the a few weeks ago and the final release of Windows 8 looming ever closer, some people are understandably going to be confused about the various versions available. 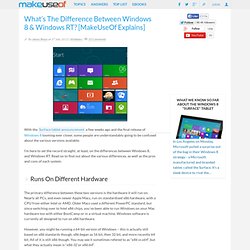 I’m here to set the record straight; at least, on the differences between Windows 8, and Windows RT. Read on to find out about the various differences, as well as the pros and cons of each system. Runs On Different Hardware The primary difference between these two versions is the hardware it will run on. Easily Fix These Common Windows 8.1 Frustrations. Windows 8.1 can be frustrating to use. 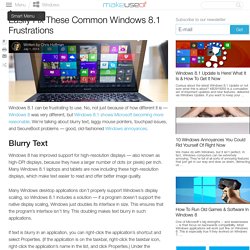 No, not just because of how different it is — Windows 8 was very different, but Windows 8.1 shows Microsoft becoming more reasonable. We’re talking about blurry text, laggy mouse pointers, touchpad issues, and SecureBoot problems — good, old-fashioned Windows annoyances. Blurry Text Windows 8 has improved support for high-resolution displays — also known as high-DPI displays, because they have a larger number of dots (or pixels) per inch. 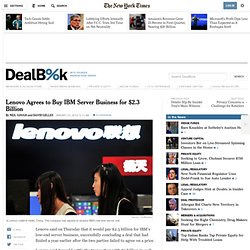 The company has agreed to acquire IBM’s low-end server unit. Lenovo said on Thursday that it would pay $2.3 billion for IBM’s low-end server business, successfully concluding a deal that had fizzled a year earlier after the two parties failed to agree on a price. Lenovo said it would settle the transaction with $2 billion in cash and the balance in its own Hong Kong-listed shares. About 7,500 IBM employees in locations including Raleigh, N.C., Shanghai and Shenzhen in China, and Taipei, Taiwan, were expected to be offered employment by Lenovo, the Chinese company said in a statement.

“With the right strategy, great execution, continued innovation and a clear commitment to the x86 industry, we are confident that we can grow this business successfully for the long-term, just as we have done with our worldwide PC business,” Yang Yuanqing, Lenovo’s chairman and chief executive, said in a statement, referring to the server industry.