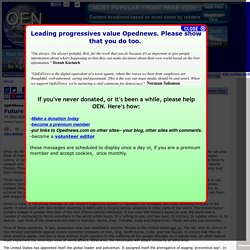 We can also think of France and its colonies in North Africa and South-East Asia, the Dutch and their Indonesian colony, Italy with its Ethiopian colony, or Spain and Portugal with their vast South American empires. These imperialist nations of the recent past used brute force to conquer and enforce their colonial control over their possessions. They were quick to punish errant colonies by crushing any revolts therein. Times have changed; only Israel uses brutal force nowadays to subdue the Palestinians.

Africa’s “Second Liberation” against Today’s Neo-Colonialism. On Monday March 25, many African Government offices, businesses and banks grind to a halt in order to commemorate Africa Day. 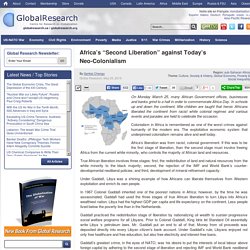 Watch colonialism collapse before your eyes in this mesmerizing GIF. One of the things that bothers people so much about Russia's slow play to gobble up chunks of Ukraine is that countries, by and large, have stopped annexing each others' territory since World War II. 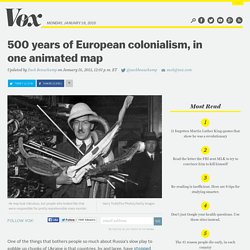 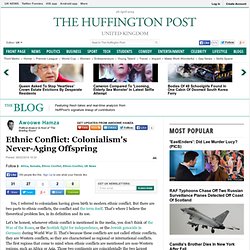 But there are two parts to ethnic conflicts, the conflict and the term itself. That's where I believe the theoretical problem lies, in its definition and its use. Let's be honest, whenever ethnic conflict is mentioned in the media, you don't think of the War of the Roses, or the Scottish fight for independence, or the Jewish genocide in Germany during World War II. That's because these conflicts are not called ethnic conflicts, they are Western conflicts, so they are characterised as regional or international conflicts.

The first regions that come to mind when ethnic conflicts are mentioned are non-Western regions, such as Africa or Asia. A call for North American De-colonization. Was Colonialism a Positive Force? It’s hard to forget meeting a man who hated Mahatma Gandhi. 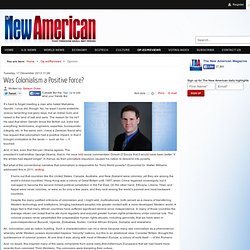 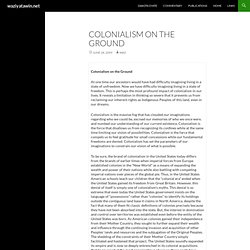 Now we have difficulty imagining living in a state of freedom. This is perhaps the most profound impact of colonialism in our lives. It reveals a limitation in thinking so severe that it prevents us from reclaiming our inherent rights as Indigenous Peoples of this land, even in our dreams. Liberation without repossession of land is gigantic colonial fraud - The Patriotic Vanguard. - Wednesday 27 November 2013. 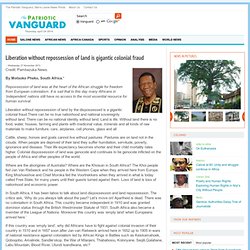 Credit: Pambazuka News. By Motsoko Pheko, South Africa.* Repossession of land was at the heart of the African struggle for freedom from European colonialism. Liberation without repossession of land by the dispossessed is a gigantic colonial fraud.There can be no true nationhood and national sovereignty without land. Cattle, sheep, horses and goats cannot live without pastures. Where are the aborigines of Australia? In South Africa, it has been taboo to talk about land dispossession and land repossession. Pozvánka na přednášku: Mizející Palestina, úterý 26. listopadu od 19:00, klub Cross, Plynární 23, Praha 7 – Holešovice. Pozvánka na facebooku zde, plakát v PDF k tisku zde. 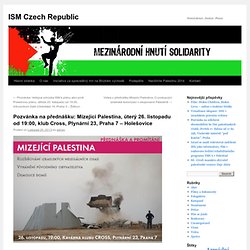 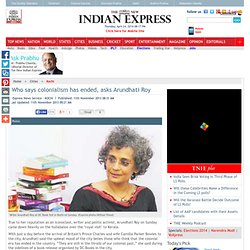 With just a day before the arrival of Britain’s Prince Charles and wife Camilla Parker Bowles to the city, Arundhati said the upbeat mood of the city belies those who think that the colonial era has ended in the country. “They are still in the thralls of our colonial past,” she said during the sidelines of a book release organised by DC Books in the city. She was referring to news reports that suggested that the city is undergoing a makeover for the royal visit. COLONIALITY: THE PAST AND PRESENT OF GLOBAL UNJUSTICE. The First Istanbul World Forum on Justice was organized by the Primer Minister Office of Public Diplomacy and SETA Foundation. 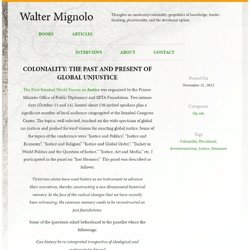 Two intense days (October 13 and 14), hosted about 150 invited speakers plus a significant number of local audience congregated at the Istanbul Congress Center. The topics, well selected, touched on the wide spectrum of global un-justices and pushed forward visions for enacting global justice. Some of the topics of the conference were “Justice and Politics”, “Justice and Economy”, “Justice and Religion” “Justice and Global Order”, “Turkey in World Politics and the Question of Justice,” “Justice, Art and Media,” etc.