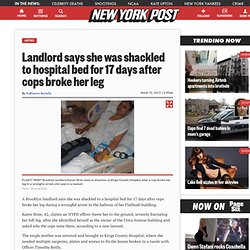 Karen Brim, 42, claims an NYPD officer threw her to the ground, severely fracturing her left leg, after she identified herself as the owner of the Utica Avenue building and asked why the cops were there, according to a new lawsuit. The single mother was arrested and brought to Kings County Hospital, where she needed multiple surgeries, plates and screws to fix the bones broken in a tussle with Officer Timothy Reilly. Adding insult to injury, court papers say, was the way police restrained her for more than two weeks during her hospital stay, with one officer posted outside her room. “She was hand- and ankle-cuffed to her hospital bed,” lawyer Marshall Bluth told The Post. “They would not allow family or friends to enter. The cult of pornography – a black feminist perspective. Parlons privilège blanc, voulez-vous? 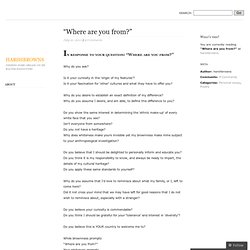 Why do you ask? Is it your curiosity in the ‘origin of my features’? Is it your fascination for ‘other’ cultures and what they have to offer you? It may not be racist, but it's a question I'm tired of hearing. Last weekend, I had The Conversation for the 3,897th time – and this time, it took place in central London just two roads away from the hospital where I was born. 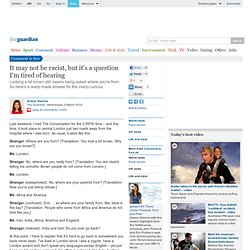 As usual, it went like this: Stranger: Where are you from? [Translation: You look a bit brown. Why are you brown?] Wall of Shame: George Zimmerman’s Defense Team et al. Let us be clear at the outset: here at The Feminist Wire, we’re fans of the Sixth Amendment and believe that everybody deserves a fair trial, including the right to defense counsel. 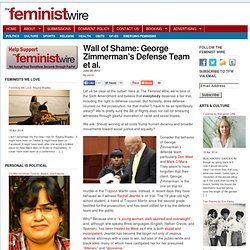 But honestly, does defense counsel (or the prosecution, for that matter?) Have to be so relentlessly sleazy? We’re pretty sure the Bill of Rights does not call for smearing witnesses through gleeful invocation of racist and sexist tropes. We ask: Should winning at all costs trump human decency and broader movements toward social justice and equality? Consider the behavior of George Zimmerman’s defense team, particularly Don West and Mark O’Mara. » On Kimani Gray—Or To Be Young, Guilty, and Black The Crunk Feminist Collective. **Trigger warning for violence** I’ve been trying to wrap my mind around the situation with Kimani Gray, but it just doesn’t make sense. 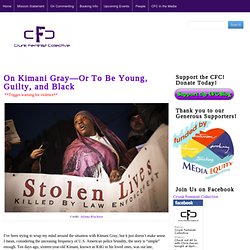 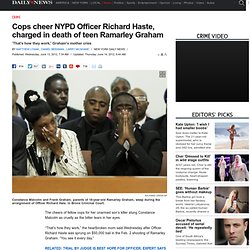 The cheers of fellow cops for her unarmed son’s killer stung Constance Malcolm as cruelly as the bitter tears in her eyes. Another son taken by the NYPD. Tamon Robinson ON MOTHER'S Day, I couldn't stop thinking about another mother who needlessly lost her son. 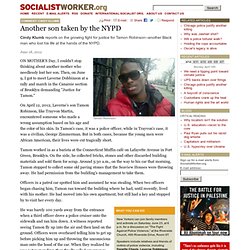 Then, on June 9, I got to meet Laverne Dobbinson at a rally and march in the Canarsie section of Brooklyn demanding "Justice for Tamon. " Trayvon Martin, Obama, and the persistence of bias. By now the facts are well-known: Trayvon Martin was a 17-year-old young black man who, on Feb. 26, 2012, was walking home from a 7-Eleven in Sanford, Florida, with a bag of Skittles and a bottle of iced tea. 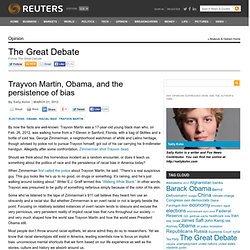 George Zimmerman, a neighborhood watchman of white and Latino heritage, though advised by police not to pursue Trayvon himself, got out of his car carrying his 9-millimeter handgun. Allegedly after some confrontation, Zimmerman shot Trayvon dead. Should we think about this horrendous incident as a random encounter, or does it teach us something about the politics of race and the persistence of racial bias in America today? “Where are you from?” It may not be racist, but it's a question I'm tired of hearing. Mad Science or School-to-Prison? Criminalizing Black Girls. High stakes test question: A female science student conducts an experiment with chemicals that explodes in a classroom, causes no damage and no injuries. 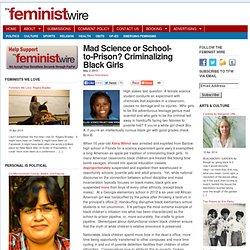 Who gets to be the adventurous teenage genius mad scientist and who gets to be the criminal led away in handcuffs facing two felonies to juvenile hall? If you’re a white girl check Box A, if you’re an intellectually curious black girl with good grades check Box B. When 16 year-old Kiera Wilmot was arrested and expelled from Bartow high school in Florida for a science experiment gone awry it exemplified a long American-as-apple pie tradition of criminalizing black girls. In many American classrooms black children are treated like ticking time bomb savages, shoved into special education classes, disproportionately suspended and expelled–then warehoused in opportunity schools, juvenile jails and adult prisons.

Yet, once again, the “feminist revolution” is lily white and over-exposed. [ii] See Daniel J. The Shocking Details of a Mississippi School-to-Prison Pipeline. Cedrico Green can’t exactly remember how many times he went back and forth to juvenile. 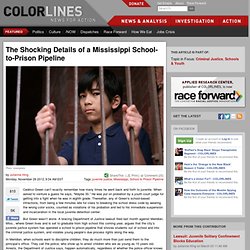 NYPD Commissioner Ray Kelly ‘Wanted to Instill Fear’ in Black and Latino Men. State Sen. Eric Adams, a retired NYPD captain, took the stand Monday in the landmark stop-and-frisk federal trial to testify about a 2010 conversation with NYPD Commissioner Ray Kelly. During his testimony at the Floyd vs. Report: NYPD Spy Program Traumatized Muslim Communities. A year and a half after the Associated Press exposed the New York Police Department’s sprawling surveillance program targeting Muslims, three civil liberties groups have detailed the corrosive impact the program had on the students, families and worshippers who were watched. The report, “Mapping Muslims: NYPD Spying and its Impact on American Muslims,” documents a pervasive sense of anxiety and self-censorship in New York area Muslim communities. The 57 students, business owners, educators and community leaders quoted in the report also expressed a fear of police and city officials that permeated nearly every aspect of their daily lives.

Sarsour’s group collaborated with the Asian American Legal Defense and Education Fund and a City University of New York project called Creating Law Enforcement Accountability and Responsibility (CLEAR) to produce the report, which they sought to deliver to Police Commissioner Ray Kelly after the press rollout. The practices have not gone unchecked. Minorities get less treatment for their pain - Health - Pain center. It seems like pain would be the great equalizer: Whether you’re black or white, we all hurt the same way. Except, it turns out, how we're treated for it varies greatly. Blacks and Hispanics are more likely than whites to deal with untreated pain and less likely to get adequate care for it, studies show. And minority patients who don't get proper pain treatment early on are likely to suffer depression and post-traumatic stress disorder down the road, says Dr. Carmen Green, a pain specialist and professor of anesthesiology at the University of Michigan. Skin color affects ability to empathize with pain.

"Pain empathy is basically feeling someone else's pain," says Carmen Green, M.D. ,"This paper tells us that race plays a role in pain empathy. " If you see someone being hit, your nervous system responds as if you had been hit tooStudy subjects appeared to feel less empathy for pain of person of a different skin colorExpert: Findings suggest racial differences could play a role in some doctor-patient interactions (Health.com) -- Humans are hardwired to feel another person's pain. But they may feel less innate empathy if the other person's skin color doesn't match their own, a new study suggests.

"Majorité silencieuse" "I am TIRED of burying black little boys" The Struggle to Be Heard is Real. Fight racist, transphobic violence! Stand Your Ground Marissa Alexander. Another son taken by the NYPD. » On Kimani Gray—Or To Be Young, Guilty, and Black The Crunk Feminist Collective. Cops cheer NYPD Officer Richard Haste, charged in death of teen Ramarley Graham. Trayvon Martin, Obama, and the persistence of bias.

Rayshawn Moreno, Staten Island Teen Dumped Into Swamp By NYPD Officers, To Get $10,000. Cops In Florida Go Too Far And Taser Man For Not Showing His I.D. Everywhere is Anaheim. Anaheim kids give firsthand accounts of police brutality. 12-Year-Old Girl Tasered In Victoria's Secret (Dejamon Baker) Loud music shooting: Argument over loud music led to fatal shooting of teen, investigators say. 10:31 p.m. Dear Dirty Hipsters. Name the country built on. Quentin Tarantino Unchained: The N-Word Supercut (Uncensored) Hari Kondabolu on "Racism vs. White Guilt" Stokely Carmichael - Nonviolence. When you live in a poor neighborhood, you are... - Optics. Malcolm X. Racism 101: Are you a Racist? Racism - What does it mean. The Personal is Political.