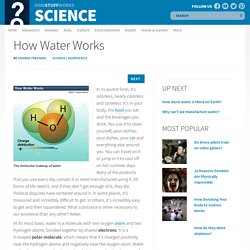 It's in your body, the food you eat and the beverages you drink. You use it to clean yourself, your clothes, your dishes, your car and everything else around you. The water cycle — Science Learning Hub. The Earth has a finite amount of water. 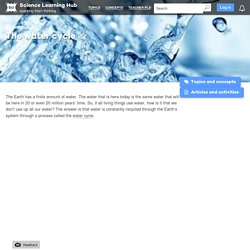 The water that is here today is the same water that will be here in 20 or even 20 million years’ time. So, if all living things use water, how is it that we don’t use up all our water? The answer is that water is constantly recycled through the Earth’s system through a process called the water cycle1. Humans and the water cycle — Science Learning Hub.

Earth’s water distribution A number of human activities can impact on the water cycle: damming rivers for hydroelectricity, using water for farming, deforestation and the burning of fossil fuels. 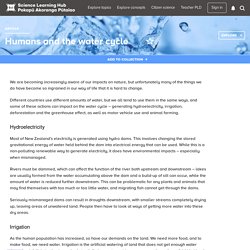 We are becoming increasingly aware of our impacts on nature, but unfortunately many of the things we do have become so ingrained in our way of life that it is hard to change. Different countries use different amounts of water, but we all tend to use them in the same ways, and some of these actions can impact on the water cycle1 – generating hydroelectricity, irrigation, deforestation2 and the greenhouse effect3, as well as motor vehicle use and animal farming.

Hydroelectricity Clyde hydro dam. Learn About The Water Cycle - Facts and Stats. The science of water - An introduction to its amazing properties. Advertisement by Chris Woodford. 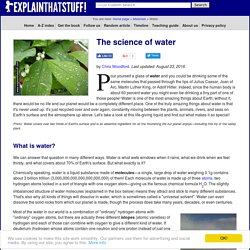 Last updated: August 23, 2016. Pour yourself a glass of water and you could be drinking some of the same molecules that passed through the lips of Julius Caesar, Joan of Arc, Martin Luther King, or Adolf Hitler. Indeed, since the human body is about 60 percent water you might even be drinking a tiny part of one of those people! Water resources. New Zealand has many sources of good-quality water. 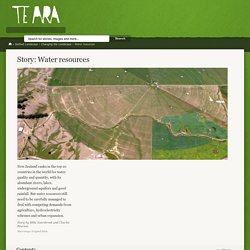 Rain In New Zealand, some places get too much rain, while others don’t get enough. Te Ara Encyclopedia of New Zealand. By world standards New Zealand has high-quality water available for many uses. 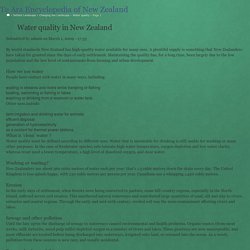 A plentiful supply is something that New Zealanders have taken for granted since the days of early settlement. Maintaining the quality has, for a long time, been largely due to the low population and the low level of contaminants from farming and urban development. How we use water People have contact with water in many ways, including: Water and Maori. A Maori view of rivers. As a child, I lived with my grandparents by the Whakatane river. 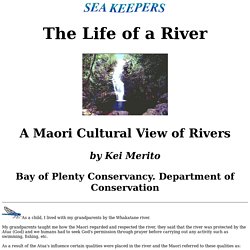 My grandparents taught me how the Maori regarded and respected the river, they said that the river was protected by the Atua (God) and we humans had to seek God's permission through prayer before carrying out any activity such as swimming, fishing, etc. As a result of the Atua's influence certain qualities were placed in the river and the Maori referred to these qualities as: (a) Mauri or life giving principle. Each river had its own mauri, and the mixing of water from two different sources such as two different rivers or water that contains or has contained human, animal, toxic or industrial waste is dangerous and could affect the productivity of the river.

Uses of water. Water page for kids. This page provides an overview of freshwater use and management for kids. 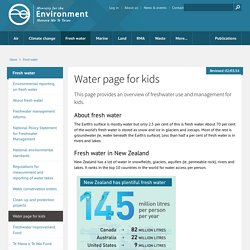 About fresh water The Earth’s surface is mostly water but only 2.5 per cent of this is fresh water. About 70 per cent of the world’s fresh water is stored as snow and ice in glaciers and icecaps. Most of the rest is groundwater (ie, water beneath the Earth’s surface). WaterThelifebloodofCanterbury. How clean are our rivers? Fiona Proffitt investigates the state of New Zealand's freshwater resources and the solutions science can offer As New Zealand tries to squeeze maximum value out of its natural resources, conflicts over water are coming to a boil.

We’re fast approaching water resource limits in some parts of the country, and pollution issues are threatening our clean, green brand. Despite a comprehensive clean-up of dirty ‘point-source’ discharges in the 1990s, water quality in many of our lakes and rivers is still declining. The cause this time is ‘diffuse-source’ pollution associated with intensive land use, particularly pastoral farming. So how do we balance the drive to grow our economy with the need for clean water? Common hydrological terms. Descriptions of the common terms that explain the processes that occur in hydrology. 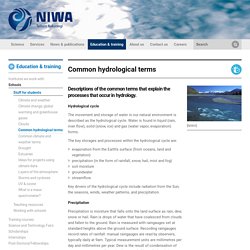