Ray of Hope Prize® Runner-Up Prize Awarded to Cypris Materials – Biomimicry Institute. Cypris is reinventing how we can manipulate light wavelengths to produce vibrant colors – without the toxic dyes. 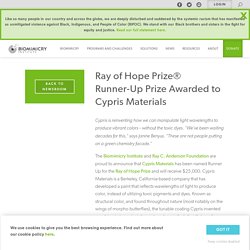 “We’ve been waiting decades for this,” says Janine Benyus. “These are not people putting on a green chemistry facade.” The Biomimicry Institute and Ray C. Anderson Foundation are proud to announce that Cypris Materials has been named Runner Up for the Ray of Hope Prize and will receive $25,000. Cypris Materials is a Berkeley, California-based company that has developed a paint that reflects wavelengths of light to produce color, instead of utilizing toxic pigments and dyes.

“This is biomimicry in action,” says Janine Benyus, biomimicry pioneer and one of this year’s Ray of Hope Prize judges. Cypris Materials’ coating can be applied to nearly any surface, and the company is preparing to scale up its manufacturing capabilities with new applications that compete in the commercial paint, cosmetics, and automotive fields. 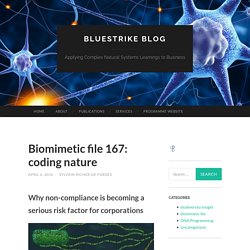 Compliance* is the state of aligning with guidelines, regulations and legislation set by outside parties such as vendors, industry organizations … Highlight: “MIT biological engineers have created a programming language that allows them to rapidly design complex, DNA-encoded circuits that give new functions to living cells…Using this language, anyone can write a program for the function they want, such as detecting and responding to certain environmental conditions. They can then generate a DNA sequence that will achieve it…It is literally a programming language for bacteria.” Insight: Communications between humans and the natural world have always been an issue.

This new discovery is a real breakthrough on the matter and offers a range of interesting possibilities in fields such as medicine, agriculture or pollution control. Many still believe that the sole reason for businesses existence is to maximize their profit and satisfy the shareholders. Biomimética: a resposta está na natureza - Akatu. Você sabia que as lâmpadas de LED, que são bem mais econômicas do que as comuns, foram inspiradas na radiação da luz dos vagalumes? 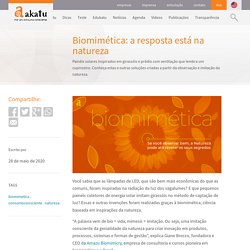 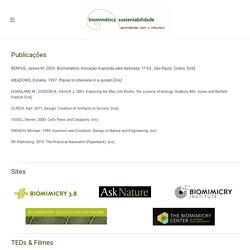 2013 Bioinspiration.pdf. 30 Days of Reconnection – Biomimicry Institute. A New World Never has there been such a moment with this kind of forced pause, where business has literally stopped in its tracks. 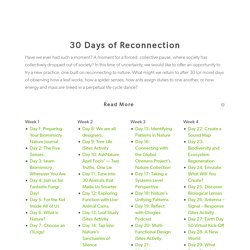 We fully recognize the pain, suffering, anxiety, and loss of lives and health, and it has been a challenging month for everyone. Somehow we remain optimistic. This is because we believe this pause in “business as usual” will have a deep impact on the future of the design of our entire built environment, stated beautifully here by ArchDaily. We turn to a new opportunity for design — one in which we put regenerative, resilient principles at the forefront. Today’s activity is about exploring the solutions that connect us, and how we can contribute to a regenerative future.

Since it’s so relevant to us all (especially right now), let’s begin with food. Biomimicry Nature Journal Reflection: Continuing on from your reflection from Day 28, what new ideas have you learned from Drawdown in acting in this new world? Want to dig a little deeper? About the Toolbox - Biomimicry Toolbox.