The Last Flash Drive on Earth. To Track or 'Do Not Track': Advancing Transparency and Individual Control in Online Behavioral Advertising. Omer Tene College of Management - School of Law, Israel Jules Polonetsky Future of Privacy ForumAugust 31, 2011. 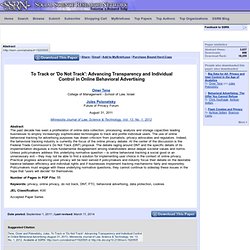 Tailored advertising and online tracking: Americans ‘don't want them’ US— A new academic study says advertisers are misguided to think they can win public support for online tracking and behavioural targeting with the promise that marketing and editorial content can be tailored to their interests. 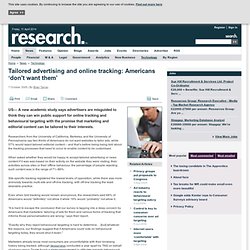 Researchers from the University of California, Berkeley, and the University of Pennsylvania say two-thirds of Americans do not want websites to tailor ads, while 57% would reject tailored editorial content – and that’s before being being told about the tracking processes that need to occur to enable content to be customised. When asked whether they would be happy to accept tailored advertising or news content if it was was based on their activity on the website they were visiting, their activities across sites or their offline behaviour, the percentage of people rejecting such content was in the range of 71–86%. But this belief in the primacy of relevant content to consumers misses a key point, says the Berkeley and Pennsylvania study. Follow us on. Snooper's charter faces rocky road.

We’re only a few weeks away from the Queen’s Speech, yet there’s one significant piece of legislation from this session which has yet to be resolved. 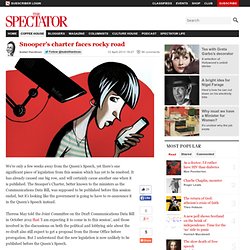 It has already caused one big row, and will certainly cause another one when it is published. The Snooper’s Charter, better known to the ministers as the Communications Data Bill, was supposed to be published before this session ended, but it’s looking like the government is going to have to re-announce it in the Queen’s Speech instead. Theresa May told the Joint Committee on the Draft Communications Data Bill in October 2012 that ‘I am expecting it to come in to this session’, and those involved in the discussions on both the political and lobbying side about the re-draft also still expect to get a proposal from the Home Office before prorogation. Mozilla SPURNS Google's cash, inks FIVE YEAR PLAN with Yahoo! Simplify SSL certificate management across the enterprise Mozilla has ended its decade-long pact with Google and will now make Yahoo! 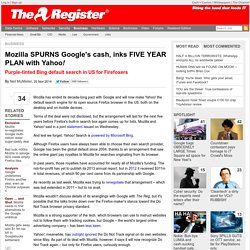 The default search engine for its open source Firefox browser in the US: both on the desktop and on mobile devices. Terms of the deal were not disclosed, but the arrangement will last for the next five years before Firefox's built-in search box again comes up for bids, Mozilla and Yahoo! Said in a joint statement issued on Wednesday. And lest we forget, Yahoo! Although Firefox users have always been able to choose their own search provider, Google has been the global default since 2004, thanks to an arrangement that saw the online giant pay royalties to Mozilla for searches originating from its browser. In past years, those royalties have accounted for nearly all of Mozilla's funding. Phil Booth sur Twitter : "For context you should really watch & appreciate what @CasparBowden has been saying for years: about #FISA #PRISM etc" In-depth Guide To Content Creation [With Infographic]

It doesn’t matter whether you’re an on-site SEO consultant, a link-building specialist or an all-round ‘internet marketer’, content creation should be particularly high on your list of priorities. 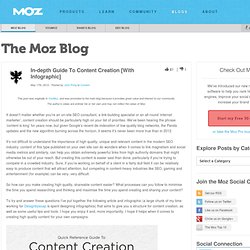 We’ve been hearing the phrase ‘content is king’ for years now, but given Google’s recent de-indexation of low-quality blog networks, the Panda updates and the new algorithm burning across the horizon, it seems it’s never been more true than in 2012. It’s not difficult to understand the importance of high quality, unique and relevant content in the modern SEO industry; content of this type published on your own site can do wonders when it comes to link magnetism and social media metrics and similarly, can help you obtain extremely powerful links from high authority domains that might otherwise be out of your reach. But creating this content is easier said than done, particularly if you’re trying to compete in a crowded industry.

Click for a full size version if you'd like to print it. Research. Getting the Maximum Number of Links From Your Infographic. As the head of content creation and SEO over at Designbysoap Ltd, a significant chunk of my weekly activities is spend producing and promoting infographics for our clients. 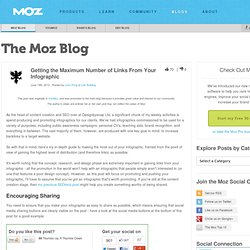 We've had infographics commissioned to be used for a variety of purposes, including public awareness campaigns, personal CV's, teaching aids, brand recognition, and everything in between. The vast majority of them, however, are produced with one key goal in mind: to increase backlinks to a target website. So with that in mind, here's my in-depth guide to making the most out of your infographic, framed from the point of view of gaining the highest level of distribution (and therefore links) as possible. It's worth noting that the concept, research, and design phase are extremely important in gaining links from your infographic - all the promotion in the world won't help with an infographic that people simply aren't interested in (or one that features a poor design concept).