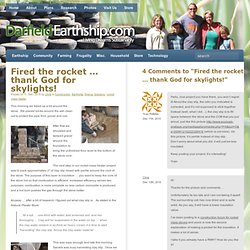 Dec, 2010 by Chris in Construction, Earthship, Energy Solutions, rocket mass heater This morning we tidied up a bit around the stove. We placed bricks around the ash clean out to protect the pipe from gravel and cob. After that we shoveled and tamped gravel around the foundation to bring the unfinished floor level to the bottom of the stove core. The next step in our rocket mass heater project was to pack approximately 2″ of clay slip mixed with perlite around the core of the stove. Anyway … after a bit of research I figured out what clay slip is.

. … fill a tub … one-third with water, add screened soil, and mix thoroughly … Clay will be suspended in the water on top … when the clay-water mixture is as thick as heavy cream, it is time to start “harvesting” the clay slip. This was easy enough and late this morning Sandra was busy harvesting clay slip. Surprisingly, this plan worked fairly well. Here are some pictures … Aprovechonaturalbuilders. We learned about home heating during week 5 of the Shelter Series, which meant that we got to play with fire 5 days in a row! 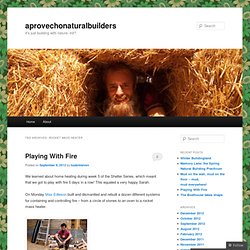 This equaled a very happy Sarah. On Monday Max Edleson built and dismantled and rebuilt a dozen different systems for containing and controlling fire – from a circle of stones to an oven to a rocket mass heater. The J shape of the rocket mass heater – this brick formation is inside of the barrels We then proceeded to build a rocket mass heater inside the Boathouse. We needed two barrels for our heater, so on Tuesday morning while most of the group built up the floor where the heater would go, myself and two others burned the paint off of the recycled barrels. This beautiful image of a tree magically appeared in the bottom of the barrel…! 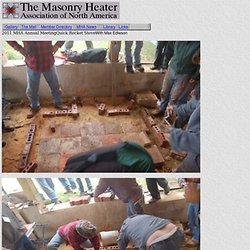 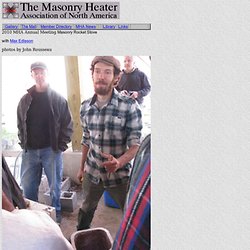 Build a rocket stove for home heating. Author’s note, 2015-02-14: Based on the interest I’ve received in this project, I’m considering selling plans for a stove similar to the one described in this article. 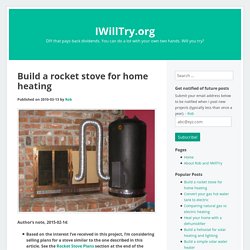 See the Rocket Stove Plans section at the end of the article and let me know if you’d be interested. Original article: For some time I’ve been considering the best way to deal with a pile of scrap wood that has been growing next to my home, the result of many woodworking and carpentry projects I’ve been involved in over the years. A few options I have considered are: taking it to the landfillcutting it into chips and using it as mulchburning it From a climate change standpoint, the latter of these is surprisingly the least harmful in the long run. Burning also has a side benefit. Ads by Google Warnings Fire is dangerous. 0. 1.