Identity. Commons. Radical/Curation Markets and Token Bonding. What to do once you admit that decentralizing everything never seems to work - By Nathan Schneider. Technology breaks sometimes. 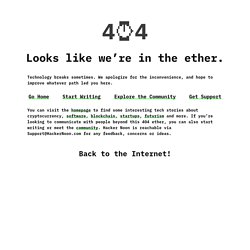 We apologize for the inconvenience, and hope to improve whatever path led you here. You can visit the homepage to find some interesting tech stories about cryptocurrency, software, blockchain, startups, futurism and more. If you’re looking to communicate with people beyond this 404 ether, you can also start writing or meet the community.

Hacker Noon is reachable via Support@HackerNoon.com for any feedback, concerns or ideas. Back to the Internet! Why Everyone Missed the Most Important Invention in the Last 500 Years. Nakamoto's Neighbor: My Hunt For Bitcoin's Creator Led To A Paralyzed Crypto Genius. Blockchain and the Human Condition - Henning Diedrich - COALA's Blockchain Workshops - Sydney 2015. Forever on the Chain. When I talk about blockchain technology, I often find it useful to take a step back and draw the following grand arc. 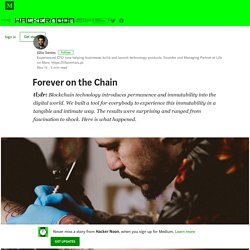 Three aspects are needed to build a modern society. The first is memory. This is how we build mythology, culture, lore, and learn from the achievements and mistakes of others. The second is communication. Communication allows us to form communities, to exchange memories and learnings, to interact. The third component, which underpins the other two, is trust. Memory and communication are of limited use in the absence of trust. For the most part, this trust is not misplaced. The way I see it, the printing press was the revolution that commoditized memory. 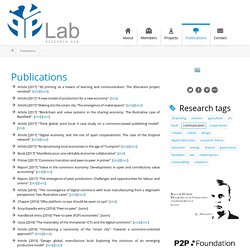 How Bitcoin’s Blockchain Could Power an Alternate Internet. Why I want Bitcoin to die in a fire. Bitcoin just crashed 50% today, on news that the Chinese government has banned local exchanges from accepting deposits in Yuan. 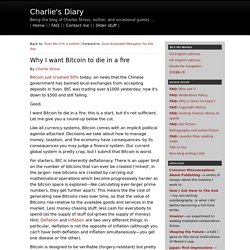 BtC was trading over $1000 yesterday; now it's down to $500 and still falling. Good. I want Bitcoin to die in a fire: this is a start, but it's not sufficient. Let me give you a round-up below the cut. Like all currency systems, Bitcoin comes with an implicit political agenda attached. Can Blockchain Challenge Content Platform Giants' Facebook & YouTube Domination?

Forging Blockchains: Spatial Production and Political Economy of. A next generation reputation system based on the blockchain. Chinese Government is Developing its Own Cryptocurrency. Cryptocurrency advocates might have guessed that it was only a matter of time before a national bank would develop its own cryptocurrency. 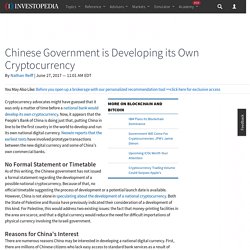 Now, it appears that the People's Bank of China is doing just that, putting China in line to be the first country in the world to develop and run its own national digital currency. Neowin reports that the earliest tests have involved prototype transactions between the new digital currency and some of China's own commercial banks. No Formal Statement or Timetable As of this writing, the Chinese government has not issued a formal statement regarding the development of a possible national cryptocurrency.

Because of that, no official timetable suggesting the process of development or a potential launch date is available. Reasons for China's Interest There are numerous reasons China may be interested in developing a national digital currency. Of course, there are also some potential reasons for hesitation. Gramoli dccl. 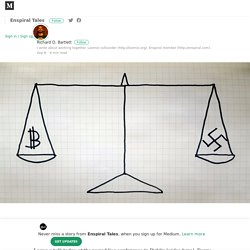 Every time I go to one of these internet-and-society conferences I get very grumpy about the blockchain hype, so today I used my stage time to spell out my grumpiness. Here’s what I said… There is a lot of anticipation for how blockchain and other decentralising technologies are going to drastically reshape society. Civilisation ❤️ trusted databases It might help to think of blockchain as a distributed database, that nobody owns, and everybody trusts.

Then you think about all the trusted centralised databases that make society work today.

Distributed Organizations. Proof of. Commons. Peer production and cooperation 09. Ownership. Uberization. Democracy. Blockchain and the Democratization of Trust - CIO Journal - WSJ. Trust is foundational to business, yet maintaining it—particularly throughout a global economy—is expensive, time-consuming, and, in many cases, ineffective. 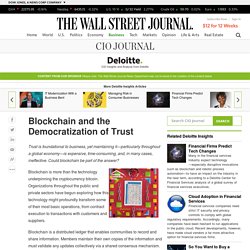 Could blockchain be part of the answer? Blockchain is more than the technology underpinning the cryptocurrency bitcoin. Organizations throughout the public and private sectors have begun exploring how this technology might profoundly transform some of their most basic operations, from contract execution to transactions with customers and suppliers. Blockchain is a distributed ledger that enables communities to record and share information. Members maintain their own copies of the information and must validate any updates collectively via a shared consensus mechanism.

Related:  Bitcoin   -  the commons   -  Python development   -  BlockChain   -  Economia   -  C Programming   -  What to do once you admit that decentralizing everything never seems to work - By Nathan Schneider   -  Education   -  Enterprise