Are Muslims Allowed To Dance? Depends Who You Ask. (RNS) The Taliban in Afghanistan shocked the world this week (Aug. 27) when they beheaded 17 people, allegedly for the crime of dancing at a mixed-gender gathering. 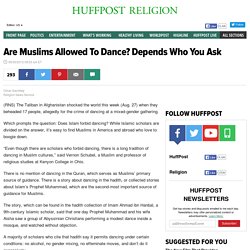 Which prompts the question: Does Islam forbid dancing? While Islamic scholars are divided on the answer, it’s easy to find Muslims in America and abroad who love to boogie down. “Even though there are scholars who forbid dancing, there is a long tradition of dancing in Muslim cultures,” said Vernon Schubel, a Muslim and professor of religious studies at Kenyon College in Ohio.

There is no mention of dancing in the Quran, which serves as Muslims’ primary source of guidance. There is a story about dancing in the hadith, or collected stories about Islam’s Prophet Muhammad, which are the second-most important source of guidance for Muslims. A majority of scholars who cite that hadith say it permits dancing under certain conditions: no alcohol, no gender mixing, no effeminate moves, and don’t do it excessively. Iran elections: early results show reformists and moderates lead race. Early results in Iran’s hard-fought elections are showing strong gains for supporters of President Hassan Rouhani that could help promote greater opening to the west and limited political advances at home – and secure him a second term in office. 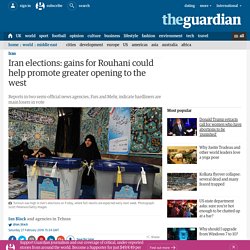 Friday’s polls for the parliament and the assembly of experts – its role is to choose the Islamic republic’s clerical supreme leader – were extended by nearly six hours due to a high turnout that was seen as likely to favour the reformist-moderate camp. In one highly significant result, the former president, Ayatollah Akbar Hashemi Rafsanjani – a key Rouhani ally – was leading the race for membership of the assembly in Tehran, the official IRNA news agency reported on Saturday.

The interior ministry said it had counted 33 million of 55 million votes by Saturday afternoon, though a final national tally is still unlikely to be known before Monday. Iranian woman defies restrictive laws by dancing without her hijab on the Tehran subway. An Iranian woman has filmed herself defying Iran’s restrictive laws against women by dancing to a song by British pop group Little Mix with her hijab around her shoulders. 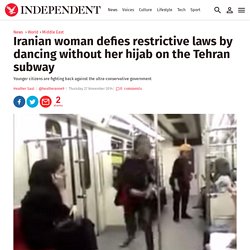 The unidentified young woman can be seen energetically dancing on a train in Tehran while other passengers hold the camera. Her dancing may seem innocuous enough, but the young woman is actually breaking two laws in the ultra-conservative country, where dancing in public is prohibited. The woman initially begins with her hijab on her head, but her lively moves cause it to slide off. Other female passengers appear to be trying not to look at her as she moves up and down the carriage, while a couple agree to hold a mobile phone and film her.

The viral video was posted to the Stealthy Freedoms of Iranian Women Facebook page, which has over 700,000 followers. Her Life as a Persian Ballerina - Tehran Bureau. Longing for freedom of expression, in more ways than one. [ dispatch ] After a four-hour drive out of the city and three shots of something strong, Newsha finally feels free enough to dance. 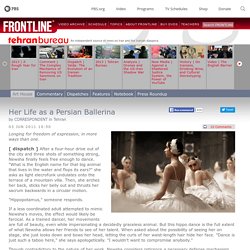 "What is the English name for that big animal that lives in the water and flops its ears? " she asks as light elecrofunk undulates onto the terrace of a mountain villa. Then, she arches her back, sticks her belly out and thrusts her sacrum backwards in a circular motion. Freida Pinto On The 'Extreme Ecstasy' Of Her Politically-Charged Dance Film. Some life stories seem fated for Hollywood. 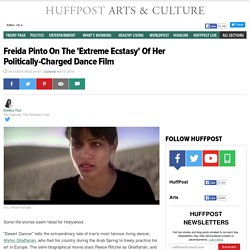 "Desert Dancer" tells the extraordinary tale of Iran's most famous living dancer, Afshin Ghaffarian, who fled his country during the Arab Spring to freely practice his art in Europe. The semi-biographical movie stars Reece Ritchie as Ghaffarian, and opens in select U.S. theaters today. The movie also stars Freida Pinto as the fictional Elaheh, a talented, mysterious and troubled dancer who inspires Ghaffarian to revolt. Filming took place in part in London and Jordan. The Illegal, Underground Ballerinas of Iran. The first time I met Ada* was at a rooftop party in Amsterdam. 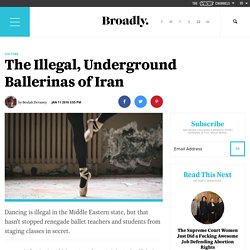 We had gravitated towards the snacks table and, reluctant to give up a prime position that offered both uninterrupted access to the fries and a view of drunk tourists falling into the Prinsengracht canal, we began swapping stories. Ada, a web developer from Iran, told me about dodging Tehran's morality police as a teenager, once dashing into a shop in the hope that they'd run past—only to realize that they had followed her in. "They used to check our nail varnish to make sure it wasn't too bright or enticing," she laughed.

"All the police had different ideas about what was going to turn men on too much and it was difficult to know how they'd react. But I knew they'd hate purple so I ran into the shop. "It sounds like something out of the French resistance. " "It was resistance! Read More: Persian Girls Are Inciting a National Debate Around Nose Jobs Six months after our conversation, Ada emailed me from Tehran. Tall Painting. What is Digital Art? No Bounds - Art and technology join to redefine dance. Amazing 3D printing PEN 'draws' plastic objects in thin air. Things of interest I want to share.