Transactional Analysis - TA-TUTOR. Kahler's Drivers. Explanations > Motivation > Kahler's Drivers Kahler (1975) identified five common drivers that motivate us, and which can be at the root of dysfunctional behaviors. 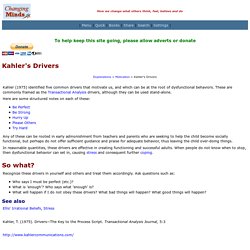 These are commonly framed as the Transactional Analysis drivers, although they can be used stand-alone. Here are some structured notes on each of these: Any of these can be rooted in early admonishment from teachers and parents who are seeking to help the child become socially functional, but perhaps do not offer sufficient guidance and praise for adequate behavior, thus leaving the child over-doing things. In reasonable quantities, these drivers are effective in creating functioning and successful adults. 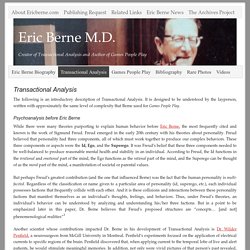 It is designed to be understood by the layperson, written with approximately the same level of complexity that Berne used for Games People Play. Psychoanalysis before Eric Berne While there were many theories purporting to explain human behavior before Eric Berne, the most frequently cited and known is the work of Sigmund Freud. Freud emerged in the early 20th century with his theories about personality.

Freud believed that personality had three components, all of which must work together to produce our complex behaviors. But perhaps Freud’s greatest contribution (and the one that influenced Berne) was the fact that the human personality is multi-faceted. Another scientist whose contributions impacted Dr. Penfield carried out these and similar experiments for many years. The human brain acts in many ways like a camcorder, vividly recording events. Transactions Defined With this definition, Dr. The Official Site of the Karpman Drama Triangle. 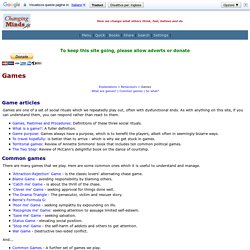 | Common games | So what? Game articles Games are one of a set of social rituals which we repeatedly play out, often with dysfunctional ends. As with anything on this site, if you can understand them, you can respond rather than react to them. Games, Pastimes and Procedures: Definitions of these three social rituals. Common games. Berne's Six Hungers. Explanations > Needs > Berne's Six Hungers Stimulus | Recognition | Contact | Sexual | Time structure | Incident | So what? 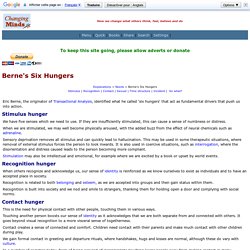 Eric Berne, the originator of Transactional Analysis, identified what he called 'six hungers' that act as fundamental drivers that push us into action. Stimulus hunger We have five senses which we need to use. If they are insufficiently stimulated, this can cause a sense of numbness or distress. When we are stimulated, we may well become physically aroused, with the added buzz from the effect of neural chemicals such as adrenaline. Sensory deprivation removes all stimulus and can quickly lead to hallucination. Stimulation may also be intellectual and emotional, for example where we are excited by a book or upset by world events.

Recognition hunger When others recognize and acknowledge us, our sense of identity is reinforced as we know ourselves to exist as individuals and to have an accepted place in society. Contact hunger Sexual hunger. Transactional Analysis. Explanations > Behaviors > Transactional Analysis Parent, Adult and Child | Communications | Conflict | So what? 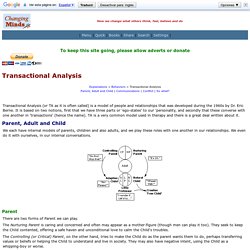 Transactional Analysis (or TA as it is often called) is a model of people and relationships that was developed during the 1960s by Dr. Eric Berne. It is based on two notions, first that we have three parts or 'ego-states' to our 'personality, and secondly that these converse with one another in 'transactions' (hence the name). TA is a very common model used in therapy and there is a great deal written about it. Kahler's Drivers. Transactional analysis, eric berne, theory examples, articles, diagrams, parent adult child TA model. Transactional analysis - contracting Transactional Analysis is a contractual approach. 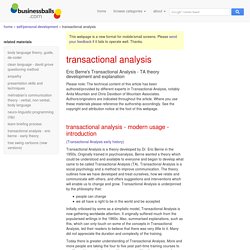 A contract is "an explicit bilateral commitment to a well-defined course of action" Berne E. (1966). Which means that all parties need to agree: why they want to do something with whom what they are going to do by when any fees, payment or exchanges there will be For example, we want the outside of our house painted, we need to find a person who will paint it and who will give us a quote for doing it.

Sometimes contracts will be multi-handed with all parties to the contract having their own expectations. Contracts need to be outlined in positive words i.e. what is wanted, rather than what is not wanted. We have contracts about employment, how much will we be paid and when, what holidays we are due, what deductions there will be etc. All parties need to state what are they are prepared to do. In summary contracts need to be: measurable, manageable and motivational. Parent ego state Adult ego state. Www.oakwoodlearning.com/pdf/Teambuilding and TA.pdf. Transactional Analysis - TA-TUTOR. Eric Berne's Transactional Analysis parent adult child model, th.

This webpage is a new format for mobile/small screens. 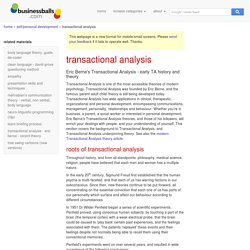 Please send your feedback if it fails to operate well. Thanks. Eric Berne's Transactional Analysis - early TA history and theory Transactional Analysis is one of the most accessible theories of modern psychology. Transactional Analysis was founded by Eric Berne, and the famous 'parent adult child' theory is still being developed today. Roots of transactional analysis Throughout history, and from all standpoints: philosophy, medical science, religion; people have believed that each man and woman has a multiple nature. In the early 20th century, Sigmund Freud first established that the human psyche is multi-faceted, and that each of us has warring factions in our subconscious.

In 1951 Dr Wilder Penfield began a series of scientific experiments. Penfield's experiments went on over several years, and resulted in wide acceptance of the following conclusions: Transactional Analysis Student.