A Plethora Of Writing Examples For Middle School. When I started my first job as a professional newspaper reporter (This job also served as an internship during my junior year in college — I just didn’t leave for about 6 years.), I quickly realized that all my experience, and all my years of journalism education had not been enough to help me write stories about drug busts, fatal car accidents and tornadoes. 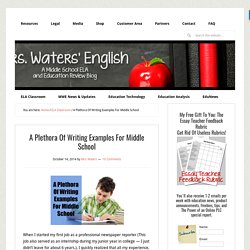 All the theoretical work I’d done, and all of the nifty little scholastic and collegiate stories I had done, did not prepare me for real world writing. At that point, I had to find a solution quickly. After all, I had a deadline to meet, and it was only a few hours away. One of my colleagues, who also served as a mentor, had the solution. She introduced me to the newspaper’s “morgue.” Once I’d gained more experience, and had internalized the formula for that particular type of story, I felt free to branch out as the situation — and my training — warranted. This is what writing looks like in the real world. Related August 6, 2014. SAMPLE STUDENT ESSAYS. Harvard study says soda tax would have health benefit if implemented in Baltimore. A tax on soda and other sugary drinks in Baltimore could help reduce diabetes and obesity in the city, while generating $25.6 million for health programs, researchers at Harvard's school of public health reported Wednesday. 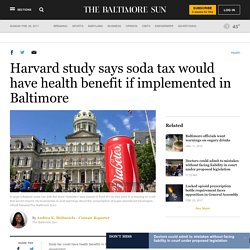 The researchers, who looked at the impact of an excise tax on sugary beverages on 15 major cities, said all would see significant health and economic benefits. The study was commissioned by Healthy Food America, an advocacy group that promotes such taxes. "We are hoping that by showing the potential significance of this, more people will consider a tax in their communities," said Jim Krieger, executive director of Healthy Food America.

The study drew criticism from the beverage and retail industries, which have lobbied against such taxes. Taxes on sugary drinks in Arkansas, West Virginia and elsewhere have had little impact on health, said Ellen Valentino, executive vice president of the Maryland-Delaware-D.C. This Proposed Tax Increase in West Virginia Could Make The State Healthier - We Heart WV. Thirsty West Virginians could soon pay more for soda and other sugary beverages purchased in West Virginia. 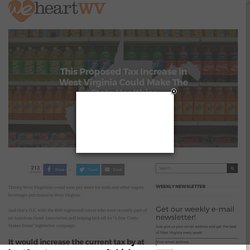 And that’s O.K. with the 600 registered voters who were recently part of an American Heart Association poll helping kick off its “A Few Cents Makes Sense” legislative campaign. It would increase the current tax by at least 1 cent per ounce on soft drinks, energy drinks and fruit juice with added water. Poll results show it’s already a popular option with state residents who would rather see a higher tax on sugary drinks than cutting jobs or funding to critical state programs. 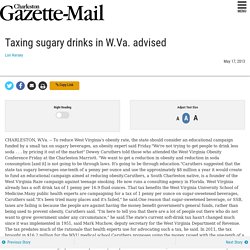 "We're not trying to get people to drink less soda . . . by pricing it out of the market" Dewey Caruthers told those who attended the West Virginia Obesity Conference Friday at the Charleston Marriott. "We want to get a reduction in obesity and reduction in soda consumption [and it] is not going to be through laws.

It's going to be through education. "Caruthers suggested that the state tax sugary beverages one-tenth of a penny per ounce and use the approximately $8 million a year it would create to fund an educational campaign aimed at reducing obesity.Caruthers, a South Charleston native, is a founder of the West Virginia Raze campaign against teenage smoking.