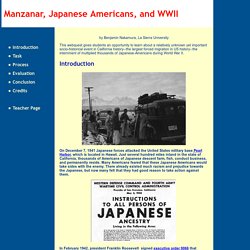 On December 7, 1941 Japanese forces attacked the United States military base Pearl Harbor, which is located in Hawaii. Just several hundred miles inland in the state of California, thousands of Americans of Japanese descent farm, fish, conduct business, and permanently reside. Many Americans feared that these Japanese Americans would take sides with the enemy. There already existed much racism and prejudice towards the Japanese, but now many felt that they had good reason to take action against them. I Will Remember You.....: Introduction. A Time Traveler's Scrapbook of Ancient India: Introduction. Letters From The Civil War: Introduction. By Chris Pizzurro, P.S. 32Q This WebQuest involves students taking roles as a Union or Confederate soldier during the Civil War. 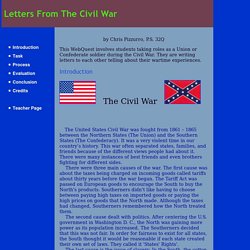 They are writing letters to each other telling about their wartime experiences. The Civil War The United States Civil War was fought from 1861 – 1865 between the Northern States (The Union) and the Southern States (The Confederacy). It was a very violent time in our country’s history. "Gimme Shelter!" Homeless in America: Introduction.

By Kathy Burke, Seattle Pacific University This webquest seeks to direct students into a discussion about the plight of homeless in America; clarifying definitions, contributing factors, services and support agencies, and a service-learning component. 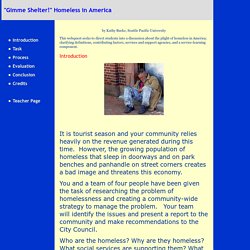 It is tourist season and your community relies heavily on the revenue generated during this time. However, the growing population of homeless that sleep in doorways and on park benches and panhandle on street corners creates a bad image and threatens this economy. You and a team of four people have been given the task of researching the problem of homelessness and creating a community-wide strategy to manage the problem. I Want You for the U.S. Army!: Introduction. Museum of Mesopotamia: Introduction. To Clone Abraham Lincoln: Introduction. By Kuang Yang, GMU This webquest is about gathering information about the life, characteristics, and contributions of Abraham Lincoln. 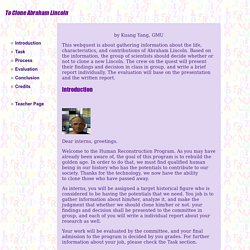 Based on the information, the group of scientists should decide whether or not to clone a new Lincoln. The crew on the quest will present their findings and decision in class in group, and write a brief report individually. The evaluation will base on the presentation and the written report. Dear interns, greetings. Welcome to the Human Reconstruction Program. As interns, you will be assigned a target historical figure who is considered to be having the potentials that we need. Your work will be evaluated by the committee, and your final admission to the program is decided by you grades. Enjoy. The Berlin Wall: Introduction. By Edie Weaver, Wil Lou Gray Opportunity School This WebQuest is designed to give students an understanding of the historical events prior to the construction of the Wall, life on each side of the wall and the reasons it finally fell. 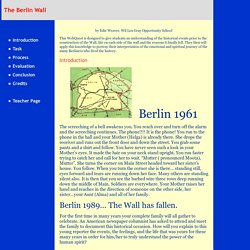 They then will apply this knowledge to portray their interpretation of the emotional and spiritual journey of the many Berliners who lived the history. Berlin 1961 The screeching of a bell awakens you. You reach over and turn off the alarm and the screeching continues. Berlin 1989… The Wall has fallen. For the first time in many years your complete family will all gather to celebrate. Life During The Medieval Times. Welcome: Life During The Medieval Times Description: You are living in the year 2008. 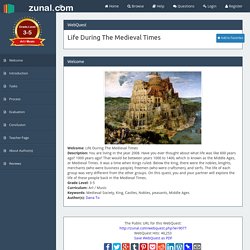 Have you ever thought about what life was like 600 years ago? 1000 years ago? That would be between years 1000 to 1400, which is known as the Middle Ages, or Medieval Times. It was a time when Kings ruled. Below the King, there were the nobles, knights, merchants (who were business people), freemen (who were craftsmen), and serfs. Hiding During the Holocaust: Task. Life in The Middle Ages: The Black Death. I Am...A Webquest of Famous People: Introduction. The Road to World War II: 4 Dictatorships. Journaling the French Revolution: Introduction. 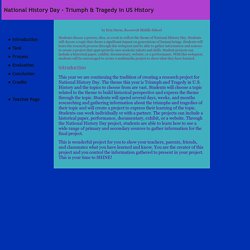 Students will choose a topic that shows a significant impact on generations of human beings. Students will learn the research process through this webquest and be able to gather information and sources to create a project that appropriately uses students talents and skills. Student projects can include a historical paper, exhibit, documentary, website, or a performance. With this webquest, students will be encouraged to create a multimedia project to show what they have learned. This year we are continuing the tradition of creating a research project for National History Day. This is wonderful project for you to show your teachers, parents, friends, and classmates what you have learned and know. HistoricalFigureResumeProject.