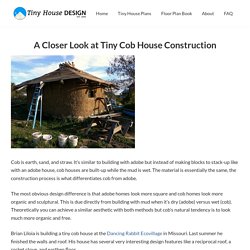 It’s similar to building with adobe but instead of making blocks to stack-up like with an adobe house, cob houses are built-up while the mud is wet. The material is essentially the same, the construction process is what differentiates cob from adobe. The most obvious design difference is that adobe homes look more square and cob homes look more organic and sculptural. This is due directly from building with mud when it’s dry (adobe) versus wet (cob). Theoretically you can achieve a similar aesthetic with both methods but cob’s natural tendency is to look much more organic and free. Brian Liloia is building a tiny cob house at the Dancing Rabbit Ecovillage in Missouri.

The reciprocal roof is a self supporting round roof that’s often made from thin logs that are then fastened together and covered with a more weather proof roofing material. The rocket stove is a built-in earthen stove with a long flu that snakes through the cob walls and built-in benches. Cob Building Basics: DIY House of Earth and Straw - Green Homes. After returning to Florida, she and some friends used the techniques she had learned to build a small pottery shed in her parents’ backyard. 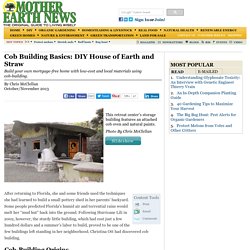 Some people predicted Florida’s humid air and torrential rains would melt her “mud hut” back into the ground. Following Hurricane Lili in 2002, however, the sturdy little building, which had cost just a few hundred dollars and a summer’s labor to build, proved to be one of the few buildings left standing in her neighborhood. Christina Ott had discovered cob building. Cob-Building Origins Cob building gets its name from the Old English term for “lump,” which refers to the lumps of clay-rich soil that were mixed with straw and then stomped into place to create monolithic earthen walls. Building with earth has a long and successful history. In the U.K., tens of thousands of cob buildings are still lived in, some of them more than 500 years old. Modern Cob Buildings Cob’s thermal performance varies by climate region. Cob Building Basics: DIY House of Earth and Straw - Green Homes. How to build a cob cottage: 9 major steps. Laying out the rubble trench foundation... 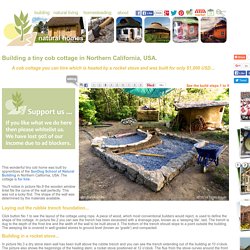 Click button No.1 to see the layout of the cottage using rope. A piece of wood, which most conventional builders would reject, is used to define the shape of the cottage. In picture No.2 you can see the trench has been excavated with a drainage pipe, known as a 'weeping tile', laid. The trench is dug to the depth of the frost line and the width of the wall to be built above it. The bottom of the trench should slope to a point outside the building.

I Love Cob! Building a Handmade Cob House. Cob House Designs & Natural Building - This Cob House. How to build with cob - watch, then try it yourself! Cob Building: Our Beautiful Cob Cottage "Henry" Building a Cobwood Roundhouse in Cornwall. Building With Cob - Got Dirt? Use It! Thanks! 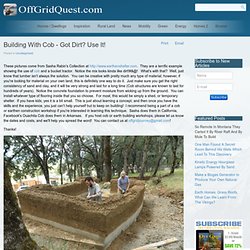 Other Great Stories From Offgridquest.com: How To Build A Tiny, Off-Grid House For $2500 (Video) Paul Wheaton/Video screen capture From life inside a tiny, 7'x12' portable house to touring an infamous roundhouse, we've been pretty fascinated by the DIY tiny house movement. 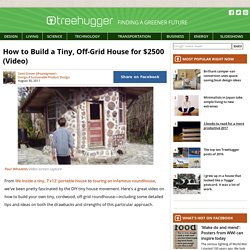 Here's a great video on how to build your own tiny, cordwood, off-grid roundhouse—including some detailed tips and ideas on both the drawbacks and strengths of this particular approach. Uploaded by Paul Wheaton—the same chap who brought us videos on how to build "hugelkultur" raised beds, and making organic lawn fertilizer from moldy hay—what I like about this video is not just the tour of an awesome, unique dwelling.

It's refreshing to also see full and frank discussion of the drawbacks and difficulties encountered on any particular project. The search for truly sustainable living is a journey, and nobody has it all figured out yet. For more information on the venue of this video, check out this blog post by Mr Kraft Does Life on Feral Farm's off grid way of life.