All New Rooftops Must Be Covered in Plants or Solar Panels in France. Frances’s new “green roof” law is cooling city streets, cutting heating and air conditioning costs, reducing water and air pollution, providing local, organic food and ecosystems for birds, bees and hundreds of other species In an effort to make concrete jungles more eco-friendly, France recently passed a law requiring the rooftops of all new buildings in commercial zones to be fully or partially covered in plants or solar panels. 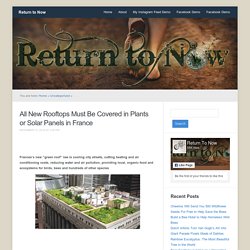 The concept, known as “green roofs,” is becoming so popular in some cities, like Paris, that even the owners of old buildings are voluntarily complying with the law, building giant rooftop farms, meadows and apiaries for bees and other pollinators. Green roofs provide a long list of fantastic benefits to society, while insulating it from some of the inherent drawbacks of urban life: 1.

Cools outside air The reason city streets can be so sweltering hot in the summer is because their aren’t many or any trees to cool down the air. Winners of Habitat for Humanity’s Sustainable Home Design Competition. Patrick Nadeau's Green-Roofed Wave Home Changes Appearance with the Seasons in France. Architect Patrick Nadeau designed his green-roofed Wave House (La Maison-vague) as one of 63 experimental houses being built near Reims in France. 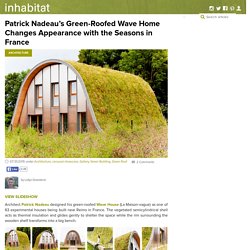 The vegetated semicylindrical shell acts as thermal insulation and glides gently to shelter the space while the rim surrounding the wooden shelf transforms into a big bench. The Wave Home has two floors. On the ground level the living room, kitchen and multimedia space open up towards the exterior by sliding walls. The upper level houses two bedrooms and a bathroom that can be accessed by a mezzanine. The entire structure is made from timber, with a concrete foundation and polycarbonate exterior walls. The roof features an automatic watering system and water retention mechanism. The house changes its appearance with the seasons and symbolizes an ocean wave or an open field, while acting as a living, breathing micro-habitat for insects and birds. + Patrick Nadeau Via Dezeen.

Healthy News and Information. By ARIANA MARISOL Installing a green roof can provide many advantages that will not only save you money, but also provide you with healthy fresh produce. 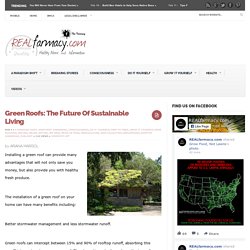 The installation of a green roof on your home can have many benefits including: Better stormwater management and less stormwater runoff. Green roofs can intercept between 15% and 90% of rooftop runoff, absorbing this runoff into root systems on your roof. The absorption rate depends on the type of growing medium and plant cover used. Green roofs reduce the need for energy to heat a house in the winter and cool it in the summer. If installed correctly, green roofs can extend the life of a conventional roof by a factor of three times. Green roofs can incorporate that can supply you with fresh, healthy produce. Green roofs provide pleasant smells, sights, and sounds that promote a healthy social environment, especially in urban areas. 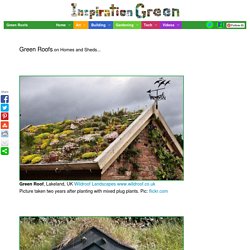 Green Roof, Lakeland, UK Wildroof Landscapes www.wildroof.co.uk Picture taken two years after planting with mixed plug plants. Pic: flickr.com. Cactus Roofs. Cactus Roof Cactus roof in Arizona by Steve Martino.Steve says prickly pear is one of the toughest plants on earth, it grows in hot, dry climates and even springs up in cracks in rock cliffs. stevemartino.blogspot.com First they reinforced the roof, then placed tar paper, then soil fabric, then 3" of native granite soil from the site. 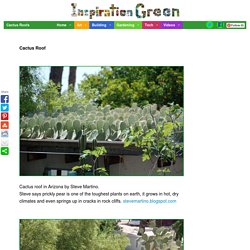