Brendan Nyhan: Biases Abound. Emergent. OSoMe: Home. Recent research reveals false rumours really do travel faster and further than the truth. A lie can travel halfway around the world before the truth has got its boots on, or so the saying goes, and new research has sought to prove just how long it takes fact checking to catch up. 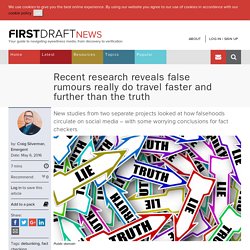 On average, it takes more than 12 hours for a false claim to be debunked online, according to two recent projects that compared how falsehoods and truths spread. One study analyzed rumors on Twitter and found that a rumor that turns out to be true is often resolved within two hours of first emerging. But a rumor that proves false takes closer to 14 hours to be debunked. Another study looked at how long it took for a fact check or debunking article to be published as a counter measure to a fake story. It found “a characteristic lag of approximately 13 hours between the production of misinformation and that of fact checking”. Hoaxy: A Platform for Tracking Online Misinformation.

Approximately 65% of American adults access the news through social media. 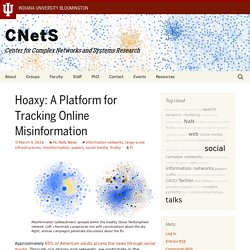 Through our shares and retweets, we participate in the propagation of the news that we find interesting and trustworthy. This has the implication that no individual authority can dictate what kind of information is distributed on the whole network. While such platforms have brought about a more egalitarian model of information access according to some, the lack of oversight from expert journalists makes social media vulnerable to the intentional or unintentional spread of misinformation. Do you believe what you read on social media? Several characteristics of online social networks, such as homophily, polarized echo chambers, algorithmic ranking, and social bubbles, create considerable challenges for our capability to discriminate between facts and misinformation, and allocate our attention and energy accordingly.

Facebook’s failure: did fake news and polarized politics get Trump elected? “If I were to run, I’d run as a Republican. 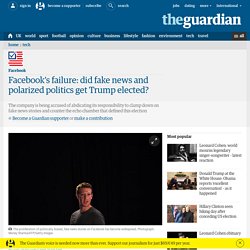 They are the dumbest group of voters in the country. They believe anything on Fox News. I could lie and they’d still eat it up.