Interdisciplinary pre-release material May 2017. Aside from the age-old conventions still used in today's world maps, one could argue that thanks to new technologies and the vast amounts of data they allow us to access, we have at least entered a new era of cartography since the height of colonialism. 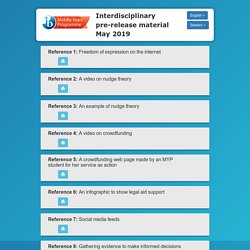 Maps are no longer mere symbols of dominion drawn up by conquerors; Africa is no longer mostly terra incognita; and one could make the case that maps now belong to everyone. At the heart of this is the rise of Google Maps, which has come to dominate cartography today, both in terms of resources and popularity. Billions of searches are made through Google each day, and Google Maps is by far the most widely used smartphone app in the world. Thanks to Google's access to masses of data from satellites, aircrafts and camera-fitted cars, users can see aerial photographs and street maps of virtually the entire planet. 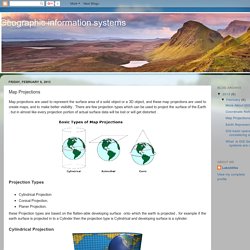 There are few projection types which can be used to project the surface of the Earth . but in almost like every projection portion of actual surface data will be lost or will get distorted . Projection Types. Types of Map Projections - Geolounge. The ways in which we visualize the world are varied- we have pictures, maps, globes, satellite imagery, hand drawn creations and more. 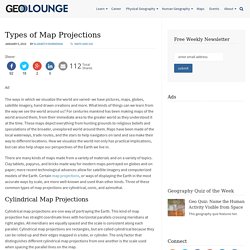 What kinds of things can we learn from the way we see the world around us? For centuries mankind has been making maps of the world around them, from their immediate area to the greater world as they understood it at the time. These maps depict everything from hunting grounds to religious beliefs and speculations of the broader, unexplored world around them. Where Google Street View is Available (Source: Google maps) Maps. Map of the Earth With Mercator Projection Using a Different Centerpoint (Source: imgur.com) Unfolding the Earth. #?borders=1~!MTY5NDM2MDc.MTk5MjYzMQ*NzQ2MDY0(NzQ2MDY0~!CONTIGUOUS_US*MTAwMjQwNzU.MjUwMjM1MTc(MTc1)MA~!IN*NTI2NDA1MQ.Nzg2MzQyMQ)MQ~!CN*OTkyMTY5Nw. Portolan Charts Intro - Bell Library: Maps and Mapmakers. Where does that strange name come from? 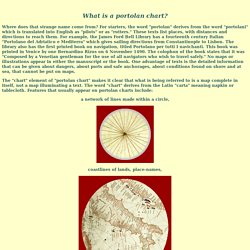 For starters, the word "portolan" derives from the word "portolani" which is translated into English as "pilots" or as "rutters. " These texts list places, with distances and directions to reach them. For example, the James Ford Bell Library has a fourteenth century Italian "Portolano del Adriatico e Mediterra" which gives sailing directions from Constantinople to Lisbon.

Mars. These Colorful Propaganda Maps Fueled 20th-Century Wars. Maps often have hidden agendas, conveyed through subtle choices made by the cartographer. That is not the case for these maps. The maps—which are currently in an exhibition called “War Map” at the Map House in London—have very clear messages. They’re war propaganda, meant to convince the public of an enemy’s evil tendencies, or that a conflict is winnable and worth the sacrifice.