End of nations: Is there an alternative to countries? Map: Norman Kirby; Photograph: Tatsuro Nishimura By Debora MacKenzie Try, for a moment, to envisage a world without countries. 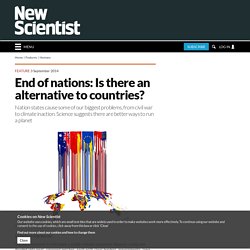 Imagine a map not divided into neat, coloured patches, each with clear borders, governments, laws. Try to describe anything our society does – trade, travel, science, sport, maintaining peace and security – without mentioning countries. Try to describe yourself: you have a right to at least one nationality, and the right to change it, but not the right to have none.

Those coloured patches on the map may be democracies, dictatorships or too chaotic to be either, but virtually all claim to be one thing: a nation state, the sovereign territory of a “people” or nation who are entitled to self-determination within a self-governing state. And more and more peoples want their own state, from Scots voting for independence to jihadis declaring a new state in the Middle East. Even as our economies globalise, nation states remain the planet’s premier political institution. End of nations: Is there an alternative to countries? Monkey seen caring for dying mate then grieving after she dies. Bin Yang, James R. 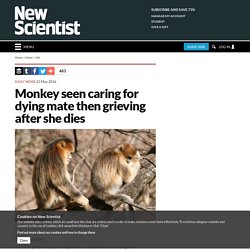 Anderson, and Bao-Guo Li/Current Biology 26 By Andy Coghlan It’s a tear-jerker worthy of Hollywood – and one of the first examples of compassionate care and grief in a wild monkey. The alpha male of a group of snub-nosed monkeys and his dying partner spent a final, tender hour together beneath the tree from which she had fallen minutes earlier, cracking her head on a rock. Before she succumbed, he gently touched and groomed her. “The case we’ve reported is particularly important because of the exclusively gentle nature of the interactions, and the special treatment of the dying female shown by the adult male,” says James Anderson of Kyoto University, Japan. Study: Words can deceive, but tone of voice cannot. A new computer algorithm can predict whether you and your spouse will have an improved or worsened relationship based on the tone of voice that you use when speaking to each other with nearly 79 percent accuracy. 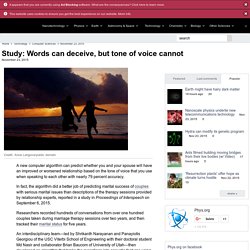 In fact, the algorithm did a better job of predicting marital success of couples with serious marital issues than descriptions of the therapy sessions provided by relationship experts, reported in a study in Proceedings of Interspeech on September 6, 2015. Researchers recorded hundreds of conversations from over one hundred couples taken during marriage therapy sessions over two years, and then tracked their marital status for five years. Is the UN about to recommend decriminalisation of all drugs? The war on drugs has taken an interesting turn. 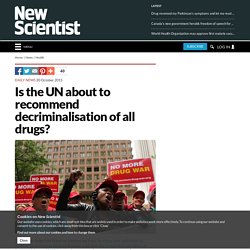 In a blog post published on Monday, businessman Richard Branson said that the United Nations Office on Drugs and Crime (UNODC) was planning to release a statement at the International Harm Reduction Conference in Malaysia recommending that governments decriminalise all illegal drugs. A long-time advocate of changing drug policies, Branson wrote that he “could not be more delighted” with this apparent development. The UNODC has since published a statement saying that the briefing paper mentioned by Branson isn’t a final or formal document and that there has been an “unfortunate misunderstanding” regarding the intention of the document. Pay people a living wage and watch them get healthier. PAYING the lowest earners less than a living wage, all too common in countries including the UK and US, leaves even full-time workers unable to lift their families out of poverty. 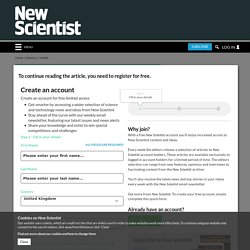 The resulting harm goes far beyond unpaid bills. Poverty separates people from resources such as healthcare and safe housing. Those in poverty experience more wear and tear from stress than the rest of us, and are sicker and die earlier. Their children are more likely to be depressed and to have trouble at school. Their newborns are more likely to die in infancy. Often, the first response is charitable mental health and medical services.

Morality 2.0: How manipulating our minds could save the world. (Image: Raymond Besinger) IN JUNE, a new voice backed up what many scientists have been saying for a while – that climate change is caused by human activity and we have a moral responsibility to tackle it. 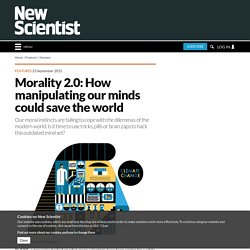 In an historic edict, Pope Francis warned that failing to act would have “grave consequences”, the brunt of which would fall on the world’s poorest people. His words came as a stark reminder that global climate change is among the most pressing moral dilemmas of the 21st century. It joins a long list. He could have added spiralling inequality, persistent poverty, death from preventable diseases and nuclear proliferation to the ethical challenges that define our times. Jesus Never Existed Says New Report That Finds No Mention Of Christ In 126 Historical Texts. Jesus never existed. 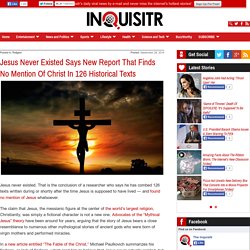 That is the conclusion of a researcher who says he has combed 126 texts written during or shortly after the time Jesus is supposed to have lived — and found no mention of Jesus whatsoever. The claim that Jesus, the messianic figure at the center of the world’s largest religion, Christianity, was simply a fictional character is not a new one. Advocates of the “Mythical Jesus” theory have been around for years, arguing that the story of Jesus bears a close resemblance to numerous other mythological stories of ancient gods who were born of virgin mothers and performed miracles. In a new article entitled “The Fable of the Christ,” Michael Paulkovich summarizes his findings, or lack of findings, which lead him to believe that Jesus never actually existed, but is instead a fictional character, made up to give followers of the religion founded in his name a central icon worthy of their worship.

Steven Pinker explains how capitalism is killing war. The idea that war is on the decline — that is, that there are fewer wars today and fewer people are dying from them than ever before — is hard for a lot of people to believe (including Republican presidential candidates). 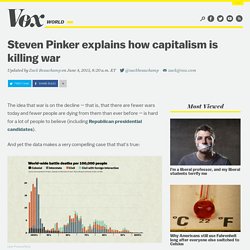 And yet the data makes a very compelling case that that's true: (Joe Posner/Vox) Those numbers were put together by Steven Pinker, a Harvard psychologist whose book The Better Angels of Our Nature makes the strongest case yet that the world is getting progressively more peaceful. Pinker's argument has come under fire recently, with some arguing that it's way too soon for anyone to say we've turned the corner from an era of war.

I spoke with Pinker this week to discuss some of the reasons why, specifically, he thinks the world has gotten so much safer, especially in the past 70 years. Steven Pinker: Yes, it's one of the causes. Morality is rooted in the way societies get their energy - opinion - 20 April 2015. Groups living just 100 miles apart can have opposite views of morality (Image: Roger De La Harpe/Gallo Images/Corbis) "NEVER work with children or animals," the saying goes. 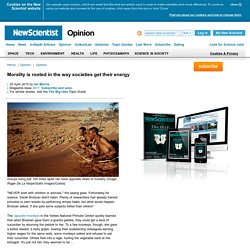 Fortunately for science, Sarah Brosnan didn't listen. Plenty of researchers had already trained primates to earn snacks by performing simple tasks; but what would happen, Brosnan asked, if she paid some subjects better than others? The capuchin monkeys in the Yerkes National Primate Center quickly learned that when Brosnan gave them a granite pebble, they could get a slice of cucumber by returning the pebble to her. Better than a ballot box: Could digital democracy win your vote? - tech - 23 April 2015. 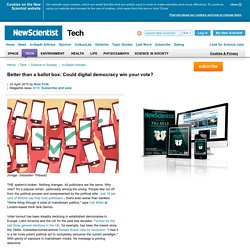 Nothing changes. All politicians are the same. Migranti, dieci bufale che alimentano il razzismo - I. Juan Enriquez and Steve Guillans, "Evolving Ourselves" Lojban. Are you deluded? The strange things we believe - life - 06 April 2015. Our judgement of which ideas feel right to believe in is fallible (Image: Gordon Scammell/Loop Images/Corbis) Normal people believe in the strangest things. About half of US adults endorse at least one conspiracy theory. Belief in paranormal or supernatural phenomena is widespread, and superstition and magical thinking are nearly universal. Why your brain needs touch to make you human - life - 25 February 2015. Touching communicates emotions (Image: Meyer/Tendance Floue) Being touchy-feely isn't just nice – caresses build social worlds from families to sports teams and may even give us our sense of self FIST bumps and bum slaps, high fives and back pats – most sports teams can't keep their hands off each other.

Watch a group of players on a winning streak and you'll see a lot of touching. Keep a tally and it might even give you a way to pick the champions. The teams at the top of the rankings at the end of the US National Basketball Association season, for example, engage in more hands-on interaction from the start than those who ended up at the bottom, according to work by a group at the University of California, Berkeley. Most violence arises from morality, not the lack of it - opinion - 02 December 2014. WHY would anyone hurt you? Why would you hurt or kill someone else? Contrary to popular perception, people are rarely violent simply because they lose control and fail to think about right and wrong. They rarely commit violence because they lack empathy and fail to see their victims as fully human.

And almost no one is violent because they draw sadistic pleasure from the suffering of others. Across cultures and history, there is generally one motive for hurting or killing: people are violent because it feels like the right thing to do. Lasting Relationships Rely On 2 Traits. Every day in June, the most popular wedding month of the year, about 13,000 American couples will say “I do,” committing to a lifelong relationship that will be full of friendship, joy, and love that will carry them forward to their final days on this earth. Except, of course, it doesn’t work out that way for most people. The majority of marriages fail, either ending in divorce and separation or devolving into bitterness and dysfunction. Does a surplus of men really mean more violence? - opinion - 07 October 2014. IN ASIA there are 100 million more men than women and this excess of men, particularly in China, has led to fears of "macho militarism and imperialism".

These concerns portray a violent, socially unstable world, caused by a glut of testosterone-driven, unmarried men. But although it is generally true that men are more violence-prone than women, does it follow that an abundance of men will cause an abundance of violence? Claims of "more men, more violence" come primarily from two scholarly traditions. From a biological perspective, male violence results from antagonistic competition over mates, which intensifies when partners are rare.

Why drugs are no longer cool: teenagers are internet addicts while their parents snort cocaine. The Rich and Their Robots Are About to Make Half the World's Jobs Disappear. Blood minerals are electronics industry's dirty secret - tech - 13 June 2014. A crackdown in the US is forcing technology firms to come clean about the source of the minerals used in their smartphones and electronics SMARTPHONE makers would prefer not to talk about it.

Bring the Food. Losing our religion: Your guide to a godless future - life - 30 April 2014. (Image: Sylvia Serrado/Plainpicture) The human mind is primed to believe in god, so why are so many people abandoning religion – and should we be worried about living in an atheist world? ON AN unseasonably warm Sunday morning in London, I do something I haven't done for more than 30 years: get up and go to church. For an hour and a half, I sing, listen to readings, enjoy moments of quiet contemplation and throw a few coins into a collection. At the end there is tea and cake, and a warm feeling in what I guess must be my soul.

The "Interpreter" in Your Head Spins Stories to Make Sense of the World. Plants do communicate—and kin relationship has a bearing. Mathematician models the spread—and prevention—of crime as a wave. How Design Thinking Could Help Solve the Skills Gap. Designing a Corporate Entrepreneurship Program – A Qualcomm Case Study (part 1 of 2)