Psychology and Mental Health: Beyond Nature and Nurture — University of Liverpool. Psychological therapies and the work of clinical psychologists are now very popular. 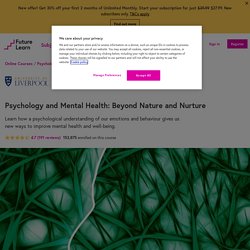 This free online course provides an introduction to how psychologists understand emotions, behaviours and thinking patterns, and how this helps clinical psychologists make sense of their clients’ problems. Former police officer tells of devastating effects of PTSD after horrific attack - but can he be cured? A former police officer who was told his PTSD could not be cured has told of his "amazing" recovery at the hands of TV therapists Nik and Eva Speakman. 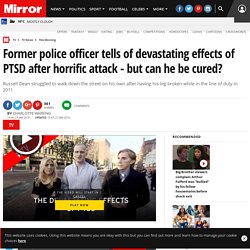 Russell Dean medically retired from the police force at 29 after having his leg broken while in the line of duty in 2011. Russell was so traumatised by the attack that he struggled to socialise, be in crowded places, and even walk down the street on his own. He appeared on This Morning after his sister Sarah appealed for help in bringing her brother back from despair. Talking about dealing with post traumatic stress disorder, Russell said: "I'd gone from being a proactive police officer to finding a safe place. PTSD - Police Firearms Officers Association. Mental Health Support. The Health & Wellbeing department facilitates the provision of psycho-education and Mental Health Support to serving police officers, calling upon the expertise of General and Mental Health Nurses, as well as a dedicated Mental Health Therapist. 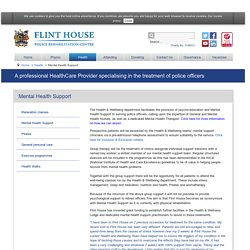 Click here for more information on how we can assist. Prospective patients will be assessed by the Health & Wellbeing teams' mental support clinicians via a pre-admission telephone assessment to ensure suitability to the service. Click here for Inclusion & Exclusion criteria. Group therapy will be the treatment of choice alongside individual support sessions with a named key worker; a skilled member of our mental health support team. Met police taking time off work with stress-related illnesses. The number of days taken off work by Met police officers owing to stress-related illness has increased by 43% over the last five years, according to figures released by the London force. 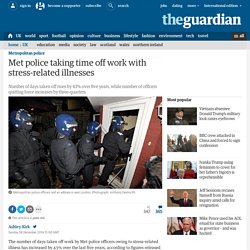 The number of resignations has also increased dramatically from 289 officers in 2009-10 to 506 in 2013-14, although the figures do not record the reasons for quitting. John Tully, chairman of the Metropolitan Police Federation (MPF), which represents rank and file officers, said the figures reflected the “human cost” of government cuts and increased workloads. The data showed “a workforce on their knees whilst upholding the finest traditions of the Metropolitan police and maintaining a professional service to the public”, he said. The MPF said the figures were likely to just be “the tip of the iceberg” as many officers hid their fatigue and stress. “We continually strive to improve through preventative training and support. One in five police officers are at risk of PTSD – here's how we need to respond. Policing is undoubtedly a stressful occupation, with officers often facing potentially traumatic situations. 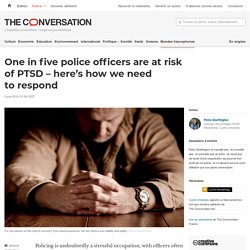 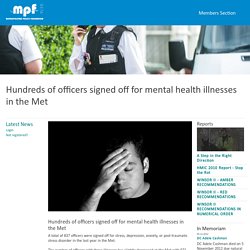 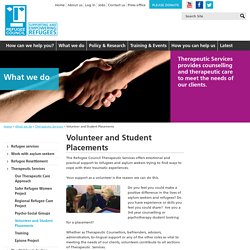 Your support as a volunteer is the reason we can do this. Do you feel you could make a positive difference in the lives of asylum seekers and refugees? Do you have experience or skills you feel you could share? Are you a 3rd year counselling or psychotherapy student looking for a placement? Whether as Therapeutic Counsellors, befrienders, advisors, administrators, bi-lingual support or any of the other roles so vital to meeting the needs of our clients, volunteers contribute to all sections of Therapeutic Services. Our volunteers have the opportunity to experience working alongside our experienced staff as a valuable and valued member of our team. Therapeutic casework - Asylum Seekers UK - Refugee Council. “I feel a bit stronger, despite some other issues at least I know I can still have a new beginning.” 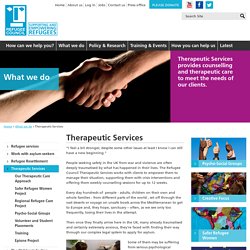 People seeking safety in the UK from war and violence are often deeply traumatised by what has happened in their lives. The Refugee Council Therapeutic Services works with clients to empower them to manage their situation, supporting them with crisis interventions and offering them weekly counselling sessions for up to 12 weeks. Every day hundreds of people - adults, children on their own and whole families - from different parts of the world , set off through the vast deserts or voyage on unsafe boats across the Mediterranean to get to Europe and, they hope, sanctuary – often, as we see only too frequently, losing their lives in the attempt. Then once they finally arrive here in the UK, many already traumatised and certainly extremely anxious, they’re faced with finding their way through our complex legal system to apply for asylum. 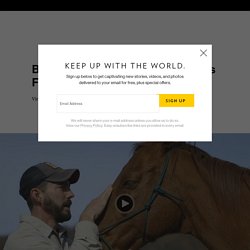 This is where some 800 U.S. service members and their families have come over the past year to seek comfort and refuge from the ravages of war. By the time guests pull through the Virginia retreat's gates, the noise of the city has been swallowed by the Blue Ridge mountains. Inside the Harrowing Journeys of Refugee Mothers. When you hear “refugee crisis,” you might envision photos of small boats afloat on dark waters and packed with people wearing neon-orange life vests. 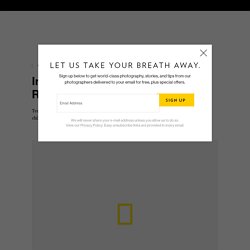 You might think of hands reaching for loved ones across fences, of borders being guarded by men with machine guns, of makeshift tent settlements teeming with homeless families. The pictures we think of are high-energy, chaotic, and full of movement. The photographs of Greek photojournalist Myrto Papadopoulos are different. They’re quiet, still, and intimate. Each of these women is a mother, sometimes pregnant, sometimes holding her child. How Psychologists Are Treating Refugees' PTSD on the Greek Island of Lesbos. MYTILENE, GREECE—Mira Aztil, a clinical psychologist with the Israeli NGO IsraAid, recalls the traumatic stories she’s heard from her refugee patients in Lesbos, Greece: One Iraqi woman described how she had suffered through an encounter with “The Biter,” a spiked metal tool used by the Islamic State to clip off the flesh of women deemed to be immodestly dressed.

Another woman, a Syrian mother of four, had been racked with guilt since her husband died on the trek across the snow-laden Syrian-Turkish border. She was convinced that her urgency to get the family to safety quickly had caused his heart to fail. Severe trauma cases are seen on a daily basis on Lesbos, the pastoral Greek island currently serving as the front line to Europe’s largest wave of forced migration since the Second World War. The Psychological Toll Of The Syrian Refugee Crisis. The Educational and Mental Health Needs of Syrian Refugee Children. The Syrian civil war, which began in March 2011, has subsequently displaced nearly 12 million people—more than 4 million of them beyond Syria's borders.

Children under the age of 18 represent about half of the Syrian refugee population, with approximately 40 percent under the age of 12. As the refugee crisis continues to unfold, this report takes stock of what is happening to these displaced children. Upon arrival in countries of first asylum, Syrian children have encountered various disruptions and barriers to receiving an adequate education. Approximately half were not enrolled in school in mid-2015; enrollment rates may be as low as 20 percent in Lebanon and 30 percent in Turkey. Even when they do enroll, Syrian children are more likely than their nonrefugee peers to receive poor or failing grades, or to drop out. Table of Contents. One year later: Are Syrian refugees finding the PTSD support they need? It’s been just over a year since Canada welcomed the first wave of Syrian refugees.

Since then, nearly 34,000 private and government-sponsored refugees have come to this country. A Senate report released last week looked at how well the Syrian refugees are doing so far. It highlighted the need for better, culturally appropriate mental health services. Based on what we know about refugees from other places, like Rwanda, Congo and Vietnam, it says, about 10 percent to 20 percent of the refugees will have significant mental health needs. Course of post-traumatic stress disorder and health care utilisation among resettled refugees in the Netherlands.

Post-traumatic stress disorder (PTSD) is a major health problem among refugees worldwide [1]. A review by Fazel and colleagues [2] showed that the overall prevalence of PTSD among refugees resettled in Western countries was about 9%, with substantial heterogeneity between studies. Although this overall percentage was not as high as that suggested by others [3, 4, 5], Fazel and colleagues suggested that refugees resettled in Western countries are about ten times more likely to have PTSD than age-matched general populations in those countries.

For example, in the Netherlands, the lifetime prevalence of PTSD is 7.4% for the general population [6], whereas this is around 20% for refugees and asylum seekers from Iran, Afghanistan, and Somalia [5]. Dr Angela Nickerson STARTTS Research Symposium 2015. How Psychologists Are Treating Refugees' PTSD on the Greek Island of Lesbos. Refugees Go From Surviving War to Fighting PTSD. BERLIN — Like many other refugees, Mustafa experienced traumatic events before fleeing his homeland of Syria. In Damascus he was detained for two months and tortured by the authorities. On his long journey to freedom, he witnessed streets and bombed out buildings filled with dead bodies. Since January 2015, Mustafa (who asked to conceal his real identity for the safety of his family members in Syria) has taken refuge in Germany, far from any war zones.

But the horrors he saw and felt in Syria continue to influence his daily life. He has had occasional panic attacks, loss of appetite, weight loss, depression and a recurring sense of hopelessness, particularly during half a year in Berlin when he knew little German and was living in refugee hostels. Refugees Go From Surviving War to Fighting PTSD. 53356b349. Noor baker. Traumatic events and symptoms of post-traumatic stress disorder amongst Sudanese nationals, refugees and Ugandans in the West Nile.

Post-Traumatic Stress Disorder. Key points Post-traumatic stress disorder (PTSD) is common among refugee children and youth, and in their parents as well.The underlying pathology is fairly consistent – withdrawal, hyper alertness, emotional numbness, re-experiencing – but symptoms vary by age of the child and the setting in which symptoms occur.After traumatic events, children may present with sub-threshold manifestations of underlying psychopathology. PTSD in Refugees. Elisa E. Bolton, PhD In 2002, the U.S. Committee for Refugees estimated that there were 14.9 million refugees and 22 million internally displaced persons in the world.

This escalating international crisis has developed over the past 60 years as organized political violence has increasingly targeted civilian populations(1). These refugees are men, women, and children, from virtually every income level and living arrangement.