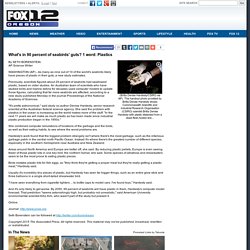 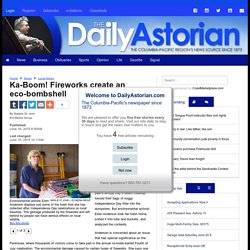 John EO Media Group NATALIE ST. JOHN — EO Media Group Environmental activist Ellen Anderson displays just some of the trash that she has collected after Independence Day celebrations on local beaches. Buy this photo ELLEN ANDERSON photo Ellen Anderson came across this shorebird carcass while walking to the beach in 2007. A local activist says one popular class of fireworks can scatter thousands of bits of plastic across the landscape, and cause a disporoportionate amount of environmental harm.

OCEAN PARK, Wash. — Most of the people who participated in last year’s annual July 5 beach cleanup tossed their bags of soggy Independence Day litter into the dumpsters. Anderson is concerned about an issue that has special significance on the Peninsula, where thousands of visitors come to take part in the annual no-holds-barred Fourth of July celebration: The environmental damage caused by certain types of fireworks. Patriotic pollution “I cried. The Universe's Plastic Planet Called Earth. 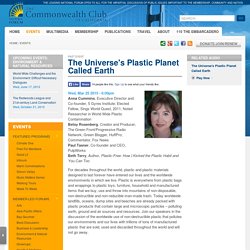 J on Instagram: “Collected a bit of plastic baling twine from Watson Hollow wildlife area. #plastic #wildlifearea #pollution #WatsonHollow #PUP #PickUpPlastic” European Union Agrees to Slash Plastic Bag Use - weather.com. You might not think twice before you choose "plastic" in line at the grocery store, but that will change quickly for residents of countries in the European Union. 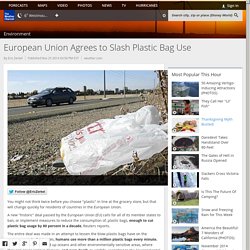 A new "historic" deal passed by the European Union (EU) calls for all of its member states to ban, or implement measures to reduce the consumption of, plastic bags, enough to cut plastic bag usage by 80 percent in a decade, Reuters reports. The entire deal was made in an attempt to lessen the blow plastic bags have on the environment. As Grist notes, humans use more than a million plastic bags every minute. Those bags invariably end up oceans and other environmentally sensitive areas, where they can cause serious damage, and even death, to wildlife, according to the Environmental Protection Agency (EPA).

(MORE: Robotic Submarine Makes Surprising Find Beneath Antarctic Sea Ice) Currently, the average person in the EU uses 191 plastic bags a year. MORE ON WEATHER.COM: The World's Most Polluted Rivers. The afterlife of plastic. James King-Holmes / Science Source BRIDGEPORT, Conn. — For the past few weeks, Moinuddin Sarker has been driving up and down the Connecticut coast looking for a large warehouse facility. 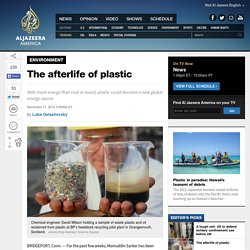 He needs it to commercialize a chemical process he has pioneered. A material chemist who was born in Bangladesh and educated at the University of Manchester, Sarker wants to go from being a bench scientist to an entrepreneur. DGrade - Photos du journal. California Reaches Compromise on Plastic Bag Ban. California lawmakers were due to unveil a compromise bill Friday that would, if passed, ban single-use plastic bags and impose a 10-cent fee on customers using store-provided bags starting in July 2015. 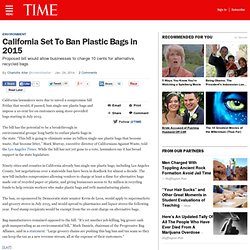 The bill has the potential to be a breakthrough in environmental groups’ long battle to outlaw plastic bags in the state. “This bill is going to eliminate some 20 billion single-use plastic bags that become waste, that become litter,” Mark Murray, executive director of Californians Against Waste, told the Los Angeles Times. While the bill has not yet gone to a vote, lawmakers say it has broad support in the state legislature. Ninety cities and counties in California already ban single-use plastic bags, including Los Angeles County, but negotiations over a statewide ban have been in deadlock for almost a decade. Bag manufacturers remained opposed to the bill. 10 ways to make your New Year's resolution a life with less plastic.

Let's face it – New Year's resolutions are overwhelming: quit the internet for a year! 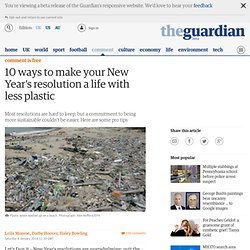 Lose 50lb (22.7kg)! Give two weeks' notice and travel the world! Lofty goals are fantastic, but don't always stick as the year progresses. This year, after the turkey and tinsel are put away, why not start small and plot a sustainable course for success? Research shows single-use plastic contaminating our oceans. Beau Pearson Posted Thu 28 Nov 2013, 4:12pm AEDT An academic studying Australian water pollution, is encouraging people to use less single-use plastic products in order to reduce marine pollution. 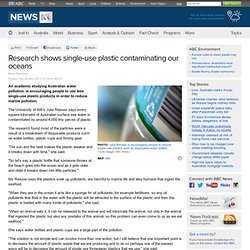 The University of WA's Julia Reisser says every square kilometre of Australian surface sea water is contaminated by around 4,000 tiny pieces of plastic. The research found most of the particles were a result of a breakdown of disposable products such as water bottles, plastic cups and fishing gear. 'The sun and the heat makes the plastic weaker and it breaks down with time,'' she said. "So let's say a plastic bottle that someone throws at the beach goes into the ocean and as it gets older and older it breaks down into little particles. " Ms Reisser says the plastics soak up pollutants, are harmful to marine life and also humans that ingest the seafood.

'Microplastic' Threat to Australian Waters. Each square kilometre of ocean around Australia is polluted with thousands of 'invisible' fragments of plastic, a new study has found, posing a potential health hazard for humans and marine life alike. 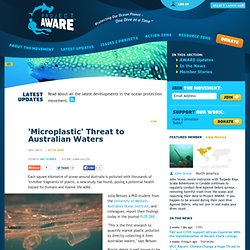 Plastic doesn't biodegrade in water but with the sun and heat it breaks down into smaller and smaller particles over time” Julia Reisser, University of Western Australia's Ocean Institute Julia Reisser, a PhD student from the University of Western Australia's Ocean Institute, and colleagues, report their findings today in the journal PLOS ONE. "This is the first research to quantify marine plastic pollution by directly collecting it from Australian waters," says Reisser. Plastic debris is well known to be a threat to marine life such as sea birds and turtles that eat plastic or become caught up in it. Instagram. Iquitoz: Hey @ProcterGamble Get #Plastic Off My Face And Ou... 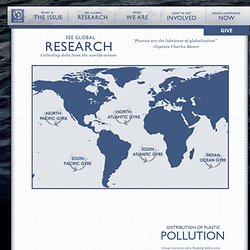 We are also collecting fish to study the ingestion of microplastic particles. See our master timeline. New ordinance not quite everybody's bag. The "paper or plastic? " question is officially passe for San Francisco retailers. On Monday, store patrons adjusted to the reality of a plastic-free shopping experience and paying 10 cents per paper bag if they didn't bring their own, as the checkout bag ordinance signed into law in February took effect.

At Papenhausen Hardware in West Portal, store manager Karl Aguilar said customers didn't seem to be bothered by the policy change. "We got a few complaints when we first put up the sign, but 99 percent are understanding," he said, noting that more people than usual decided to skip bags altogether.

"I think it's good that the city's doing something. " Across the street at the Eezy Freezy market, owner Al Khalidi is not so pleased about the city's actions. Science Cafe in Fresno CA: The Great Pacific Garbage Patch. Mumbai Mangroves: Who is Responsible for Plastic Pollution? Pocket : What’s So Bad About Plastic Bags? 5 Gyres - Understanding Plastic Pollution Through Exploration, Education, and Action.

So right. Afraid I would sew my fingers together. But I guess that would provide a very organic container. (-: – iquitoz

Very similar products on Etsy, or you can get out yer sewing machine! – team_kiki

Seabirds study shows plastic pollution reaching surprising levels off coast of Pacific Northwest. Plastic pollution off the northwest coast of North America is reaching the level of the notoriously polluted North Sea, according to a new study led by a researcher at the University of British Columbia. The study, published online in the journal Marine Pollution Bulletin, examined stomach contents of beached northern fulmars on the coasts of British Columbia, Canada, and the states of Washington and Oregon, U.S.A.