Neil Young bravely takes on. Congress Could Soon Pass A Ban On GMO Labeling (Introduced by Monsanto) Monsanto recently introduced a bill to ban all mandatory GMO labeling in the US, which was approved by the House Agriculture Committee. 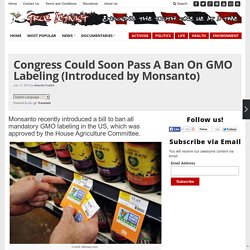 Credit: stltoday.com Biotech companies know the power of consumer awareness, therefore, have been doing everything within their power to keep individuals and their families ignorant of what’s in their food. While suppression techniques and buy-outs have worked in the past, advocates for GMO labeling aren’t giving up the fight anytime soon.

In fact, 90%+ of the population (in the United States) has expressed desire to see genetically modified foods labeled. And amazingly, 68% of doctors want to see a label slapped onto GMO foods as well. This Mycologist Holds The Patent That Could DESTROY Monsanto. Paul Stamets has figured out how to use mother nature to safely control over 200,000 species of insects. 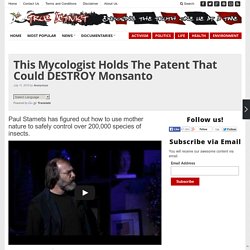 Monsanto, the biotech company found to be the most hated organizations in the world, is responsible for a number of dirty dealings that have earned it such a reputation. This Mycologist Holds The Patent That Could DESTROY Monsanto. France Bans the World’s Leading Herbicide From Garden Stores. Walk into any neighborhood garden store and you’ll most likely find weed-killing jugs of chemicals right next to the tulips, daisies, and bird feeders. 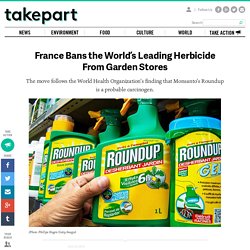 But that will no longer be the case in France. On Sunday, Ségolène Royal, the environment and energy minister, announced a plan to ban Roundup from all garden=store shelves in the country. Tell Congress: No Fast-Tracked Trade Deals for Monsanto! Monsanto hates democracy. 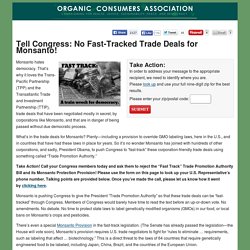 That’s why it loves the Trans-Pacific Partnership (TPP) and the Transatlantic Trade and Investment Partnership (TTIP), trade deals that have been negotiated mostly in secret, by corporations like Monsanto, and that are in danger of being passed without due democratic process. What’s in the trade deals for Monsanto? Plenty—including a provision to override GMO labeling laws, here in the U.S., and in countries that have had these laws in place for years. 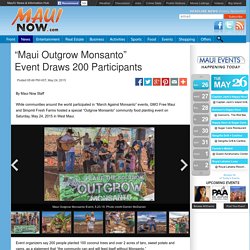 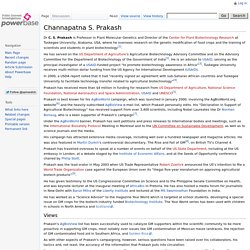 S. Prakash is Professor in Plant Molecular Genetics and Director of the Center for Plant Biotechnology Research at Tuskegee University, Alabama, USA, where he oversees research on the genetic modification of food crops and the training of scientists and students in plant biotechnology[1]. Consumer Self-Defense: 12 Ways to Drive GMOs and Roundup off the Market. "Monsanto should not have to vouchsafe the safety of biotech food," said Phil Angell, Monsanto's director of corporate communications. 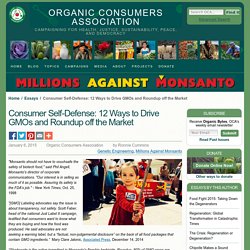 "Our interest is in selling as much of it as possible. Assuring its safety is the FDA's job. " - New York Times, Oct. 25, 1998 "[GMO] Labeling advocates say the issue is about transparency, not safety. Scott Faber, head of the national Just Label It campaign, testified that consumers want to know what they are buying and how the food was produced.

He said advocates are not seeking a warning label, but a “factual, non-judgemental disclosure” on the back of all food packages that contain GMO ingredients.” “Glyphosate is the active ingredient in Monsanto's flagship herbicide, Roundup. 80% of GMO crops are engineered to withstand Roundup and GMO crops now make up 90% of the United State's corn, soy, sugar, canola, and cottonseed. “We do not oppose… genetically modified food ingredients. After opposition: Monsanto patent on tomatoes revoked. Monsanto implicated in “fraud and abuse of patent law” 22 December 2014 / Munich. 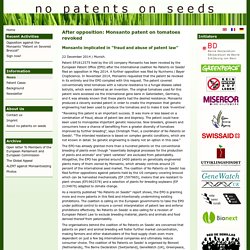 Patent EP1812575 held by the US company Monsanto has been revoked by the European Patent Office (EPO) after the international coalition No Patents on Seeds! Filed an opposition in May 2014. What is Genetically Modified Food? We are Winning the Fight Against Monsanto & GMOs. Thanks to the intellectual campaigns we have been launching on the front lines against the agricultural corruption brought upon by Monsanto and its GMOs, we are now winning the overall war against the corporate monopoly and genetically modified creations at large. 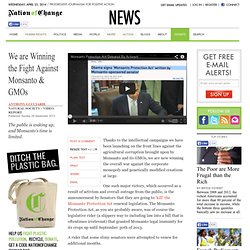 One such major victory, which occurred as a result of activism and overall outrage from the public, is the announcement by Senators that they are going to ‘kill’ the Monsanto Protection Act renewal legislation. The Monsanto Protection Act, as you are probably aware, was of course the legislative rider (a slippery way to including law into a bill that is oftentimes irrelevant) that granted Monsanto legal immunity for its crops up until September 30th of 2013.

Top Ways to Flip Monsanto the Bird. Eric Draven, Guest Everyday, more and more people are waking up and discovering that Monsanto and their many products are being found to be a hazard to human health. 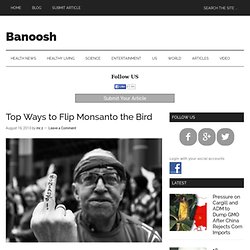 It does not matter how much PR money Monsanto spends, people all over the world are realizing the truth. Last year’s first real independent GMO study conducted in Europe demonstrated the long-term effects of GMO corn and the effects of Monsanto’s herbicide Roundup fed to rats. The tumor growth rate of the lab rats fed a GMO diet was alarming. This sparked a huge grassroots movement culminating into the March Against Monsanto, which took place on May 25th 2013 and drew in millions of people in over 400 cities across the world, and they plan to march again on October 12th 2013.

In April 2013, MIT scientist Stephanie Snell PhD, co-author of a top study on glyphosate, explained in an interview how this chemical, which is the broad-spectrum systemic herbicide used by Monsanto in Roundup, is quite toxic to our health. EU sides with Monsanto in GMO Cancer Corn word war. The European Food Safety Authority has rejected a controversial study by French scientists linking GM corn to cancer. Many in Europe are already calling for stricter controls on GMOs, as farmers weigh the lucrative crops against health concerns. ­

In September, French scientists from the University of Caen released a study claiming that rats fed on a diet containing NK603 – a corn seed variety made tolerant to amounts of Monsanto’s Roundup weed-killer – or given water mixed with the product at levels permitted in the United States died earlier than those on a standard diet. Monsanto leaves farmers ‘enslaved in a new kind of serfdom’ — RT Op-Edge. William Engdahl is an award-winning geopolitical analyst and strategic risk consultant whose internationally best-selling books have been translated into thirteen foreign languages. Published time: July 23, 2013 20:14 AFP Photo / Alain Guilhot Monsanto will no longer be pursuing approval for the cultivation of new biotech crops in Europe but will instead focus on the import of existing crops.

The easing of pressure is tactical, political analyst and author William Engdahl told RT. Tell the EPA to Keep Glyphosate off Your Plate! For 20 plus years Monsanto has said that its proprietary weedkiller Roundup and its main chemical ingredient glyphosate were safe. But in the past several years a host of studies have linked Roundup and glyphosate to an alarming number of diseases threatening animal and human health, including obesity, infertility, cancer and Alzheimer’s. Now officials in the Obama administration’s Environmental Protection Agency are attempting to raise the allowable chemical residue of glyphosate in many important food crops that we eat everyday, including vegetables such as carrots and sweet potatoes and flax and sunflower seeds. 5 Million Farmers Sue Monsanto for $7.7 Billion. Launching a lawsuit against the very company that is responsible for a farmer suicide every 30 minutes , 5 million farmers are now suing Monsanto for as much as 6.2 billion euros (around 7.7 billion US dollars).