A research on the attitude of youth on fashion. Why Your Attitude is Everything - SUCCESS magazine. One of the most important steps you can take toward achieving your greatest potential in life is to learn to monitor your attitude and its impact on your work performance, relationships and everyone around you. 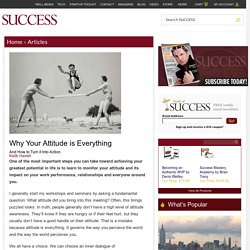 I generally start my workshops and seminars by asking a fundamental question: What attitude did you bring into this meeting? Quote by Charles R. Swindoll: “Attitude is more important than facts. It is mo...” Is attitude more important than knowledge? Behance. YMC Womenswear SS/14 Look Book. Magazine YMC Womenswear SS/14 Lookbook We art directed and designed the new spring summer look book for YMC. 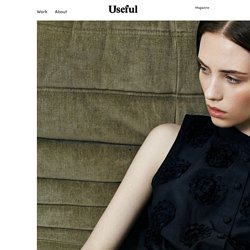 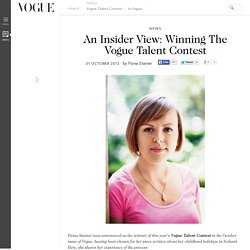 Here, she shares her experience of the process: I'd heard about the competition in previous years and thought about entering, but I never went ahead with it. This year I found myself coming up with ideas on several occasions and thinking, "That would work for Vogue. " So I decided that this year would be the year I took the plunge! My winning piece was inspired by the multitude of memories associated with my summer holidays in Ireland. Untitled. 03 August 2012 Ella Alexander VOGUE Talent Contest winner Lisa Jiang didn't have time to worry about whether or not she'd scooped this year's prize, after she'd sent off her submission - she had something altogether more frightening to think about, her AS-levels. 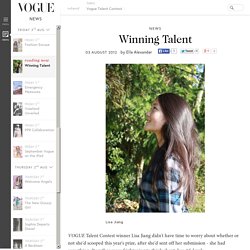 "I didn't really have time to dwell on my entry," she told us. "Whenever the thought of the contest came up in my mind, I would squash it so I wouldn't get my hopes up. It's surprisingly easy to do when you're revising osmosis. " The 17-year-old student decided to enter the annual competition, which aims to uncover new journalistic talent, after completing a work experience placement at online style boutique Café La Moda. "My family's house was destroyed in the fires, along with more than 500 other homes," Jiang explained. Jiang cites the contest finalist lunch - at which a small group of finalists meet senior members of the Vogue magazine team - as her favourite part of the experience. 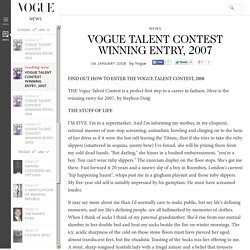 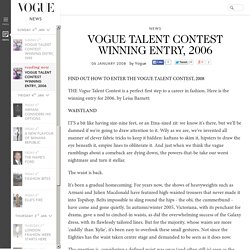 Here is the winning entry for 2006, by Leisa Barnett: IT'S a bit like having size-nine feet, or an Etna-sized zit: we know it's there, but we'll be damned if we're going to draw attention to it. Wily as we are, we've invented all manner of clever fabric tricks to keep it hidden: kaftans to skim it, hipsters to draw the eye beneath it, empire lines to obliterate it. And just when we think the vague rumblings about a comeback are dying down, the powers-that-be take our worst nightmare and turn it stellar. The waist is back. It's been a gradual homecoming. The question is, considering a defined waist was once (and often still is) seen as the ultimate in sexiness, why the need for such a covert operation? It almost goes without saying that our modern-day preoccupation with weight plays its part. It's important to see this shift as part of the bigger social picture. Vogue Talent Contest Winning Entry, 2001: Charlotte Sinclair (Vogue.co.uk)

THE Vogue Talent Contest is a perfect first step to a career in fashion. 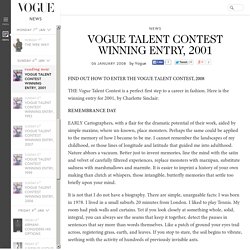 Here is the winning entry for 2001, by Charlotte Sinclair: EARLY Cartographers, with a flair for the dramatic potential of their work, aided by simple maxims; where un-known, place monsters. Perhaps the same could be applied to the memory of how I became to be me. I cannot remember the landscapes of my childhood, or those lines of longitude and latitude that guided me into adulthood. Vogue Talent Contest Winning Entry, 1999: Owen Sheers (Vogue.co.uk) THE Vogue Talent Contest is a perfect first step to a career in fashion. 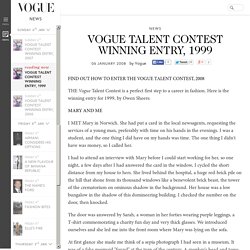 Here is the winning entry for 1999, by Owen Sheers: I MET Mary in Norwich. She had put a card in the local newsagents, requesting the services of a young man, preferably with time on his hands in the evenings. Vogue Talent Contest Winning Entry, 1992: Harriet Quick (Vogue.co.uk) THE Vogue Talent Contest is a perfect first step to a career in fashion. 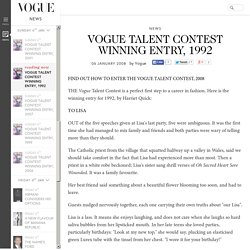 Here is the winning entry for 1992, by Harriet Quick: OUT of the five speeches given at Lisa's last party, five were ambiguous. It was the first time she had managed to mix family and friends and both parties were wary of telling more than they should. The Catholic priest from the village that squatted halfway up a valley in Wales, said we should take comfort in the fact that Lisa had experienced more than most. Clothes, Cameras and Coffee: My writing. Writing My writing covers topics including style, fashion (particularly sustainability), feminism, family, culture, literature, mental health and body image. 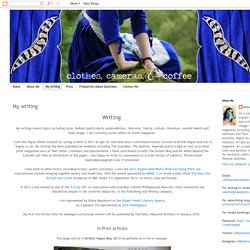 Vogue Talent Contest 2013. That day I shall never forget. The letter came swiftly through the letterbox in a posh cream envelope. The dog barked. Mum yelled up to me. A little knot formed in my stomach as I rushed down the stairs. I’d already got my bank statement, it must be the usual boring letter from the dentist, my school, or the library. Clothes, Cameras and Coffee: Vogue Talent Contest.

Clothes, Cameras and Coffee: Celebration or Denigration? I've just spent the most wonderful weekend at London Fashion Week, where I saw fascinating shows, scribbled notes to my heart's content and met with good friends as well as interesting new people. I'll be covering much of this in a subsequent post. However, time is short and my teachers at college have decided that I should have no free hours this week, as I've been set several essays. Therefore, I thought it would be an appropriate time to post one of the articles that I submitted for the Vogue Talent Contest - particularly in light of some of the coverage that London Fashion Week and fashion in general recieves in the media.

This was my polemic/ opinion piece: Celebration or denigration? As a reader of Vogue, have you ever had to justify your interest in fashion?