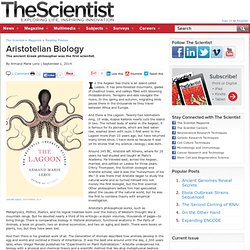 VIKING ADULT, SEPTEMBER 2014In the Aegean Sea there is an island called Lesbos. The Plasma Universe Wikipedia-like Encyclopedia) Science’s Looming ‘Tipping Point’ It is essential in these exuberant times to pay critical attention to both the observational constraints and to the basic mathematical laws, with a clear sense of what is solid theory and what is only unsupported speculation. 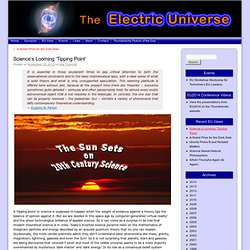 This seeming platitude is offered here without jest, because at the present time there are ‘theories’ – scenarios sometimes quite detailed – seriously and often passionately held, for almost every exotic astronomical object that is not resolved in the telescope. In contrast, the one star that can be properly resolved – the pedestrian Sun – exhibits a variety of phenomena that defy contemporary theoretical understanding.— Eugene N. Parker A ‘tipping point’ in science is supposed to happen when the weight of evidence against a theory tips the balance of opinion against it. But we are dazzled in this space age by computer-generated ‘virtual reality’ and the sheer technological brilliance of applied science. Dysfunctional Science Dysfunctional Education Research Funding.

The Electric Universe. Two of these four forces act in the atomic core. 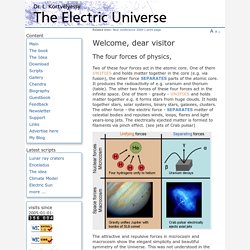 One of them UNIFIES and holds matter together in the core (e.g. via fusion), the other force SEPARATES parts of the atomic core. [The placebo mystery or neurobiology of t... [Bull Acad Natl Med. 2011] Meet Alana, The Girl With Three Biological Parents. Web.stanford.edu/~pnoyes/ascii.htm. About the ANPA WEST Journal When a photograph develops in the darkroom, it doesn't just emerge as a face or a landscape or whatnot. 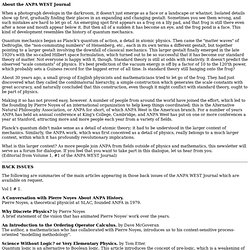 Society for Interdisciplinary Studies. My Science, My Religion. An Insider’s View of a Fringe Archeology. I presented this paper at the annual meeting of the European Association of Archaeologists, held in Zadar, Croatia, September 18–23, 2007, in a session called “‘Fringe’ Archaeologies: ‘The Other’ Past,” organized by archeologists Eleni Stefanou and Anna Simandiraki. 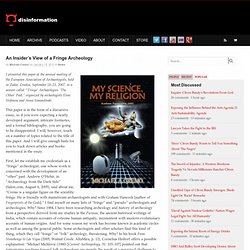 This paper is in the form of a discursive essay, so if you were expecting a neatly developed argument, intricate footnotes, and a formal bibliography, you are going to be disappointed. I will, however, touch on a number of topics related to the title of this paper. And I will give enough hints for you to track down articles and books mentioned in the essay. Vedic Science - Is the Computer our God? Quackwatch. Review: Auditory Hallucinations, Composed. A pair of one-act chamber operas takes the audience inside the world of imagined sound. 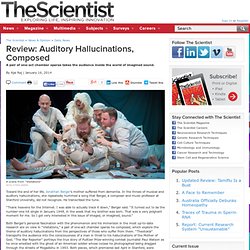 Stranger than Fiction. Plant biology: You can't make this stuff up. 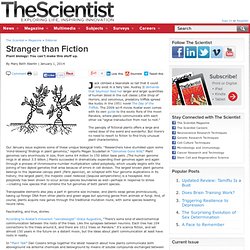 Jack climbed a beanstalk so tall that it could only exist in a fairy tale. Audrey II demands that Seymour feed her larger and larger quantities of human blood in the cult classic Little Shop of Horrors, and venomous, predatory triffids spread like kudzu in the 1951 novel The Day of the Triffids. The 2009 sci-fi movie Avatar even comes with its own guide to the exotic flora of the moon Pandora, where plants communicate with each other via “signal transduction from root to root.” The panoply of fictional plants offers a large and varied dose of the weird and wonderful. But there’s no need to resort to fiction to find truly unusual plant characteristics. Our January issue explores some of these unique biological traits. Transposable elements also play a part in genome size increase; and plants swap genes promiscuously, taking up foreign DNA from other plants and green algae but spurning genes from animals or fungi. Science, Politics and Global Warming.

“In the end, science offers us the only way out of politics. 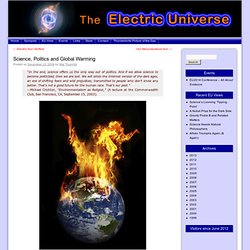 And if we allow science to become politicized, then we are lost. We will enter the Internet version of the dark ages, an era of shifting fears and wild prejudices, transmitted to people who don’t know any better. That’s not a good future for the human race. That’s our past.” —Michael Crichton, “Environmentalism as Religion,” (A lecture at the Commonwealth Club, San Francisco, CA, September 15, 2003). The Global Warming circus in Copenhagen was politics driven by a consensus that, by definition, has nothing to do with science. Despite the glossy media image, modern science is a mess. “Science has become religion! There have been several warm climatic periods documented in history that had nothing to do with human activity. Is Reality An Illusion? WARNING: Watch this video only if you're ready to wake up!

Inequality Is Real. Mind over Matter: Secrets of Human Aura. Mind-Matter Interaction Princeton Research. Lost your phone? Log on to these websites. If you know the IMEI number of your phone, it is not very difficult to trace the lost phone News | BANGALORE, INDIA: There are various websites that help you track your lost mobile phone. 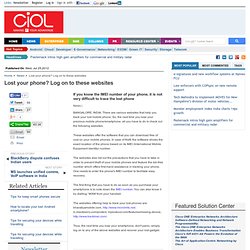 So, the next time you lose your precious mobile phone/smartphone, all you have to do is check out the following websites. These websites offer the software that you can download free of cost on your mobile phones. In case of theft, the software shows the exact location of the phone based on its IMEI (International Mobile Equipment identity) number. The websites also list out the precautions that you have to take in order to prevent theft of your mobile phones and feature the toll-free number which offers first-hand assistance in tracking your phone. 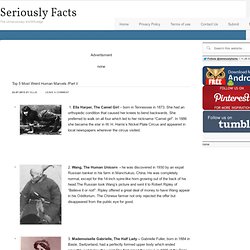 And Discovered a New Moon for Neptune - Megan Garber. A reminder of how much we still have to learn about our own little corner of the universe It started when Mark Showalter followed a whim. On July 1, the SETI Institute astronomer was studying -- as one does, when one is a SETI Institute astronomer -- archival pictures from the Hubble Space Telescope. The images were of Neptune, and Showalter was analyzing the faint arcs, or segments of rings, that surround the ice giant. Here was the whim: Showalter had a thought that he should look beyond the ring segments ... and, when he did so, he discovered a tiny, white dot about 65,400 miles from the planet.

But while the actual science behind this story is fascinating, the treatment is still at an extremely experimental stage and has only been tested in a handful of patients. And while we’re always keen to welcome exciting experimental cancer treatments, we also want to clear up a few misconceptions about what the research actually involved. To be absolutely clear, the doctors in the video did NOT inject HIV – nor a “deadly disease” – into a child. Hungry Birds (hungry_birds) Llaboration sheds new light on autism and artistic practice. A long-running collaboration between artist Jon Adams and scientist Simon Baron-Cohen has resulted in a new music performance exploring autism and artistic practice. Funded by the Wellcome Trust, Konfirm takes place this Friday at Arts Catalyst, London.

The sound/visual piece uses a large analogue modular synthesiser to combine music, video and spoken word with digitally metamorphosed MRI noise. System D, the informal economy: Robert Neuwirth at TEDGlobal 2012. Tasmanian Science Talent Search. The Shape of Mathematics. SHIFT. Institute of Noetic Sciences. Resonance: Beings of Frequency. The Many Faces of Success in Citizen Science. This is a guest post by Amy Freitag. She is a science studies scholar interested broadly in how different ways of knowing might contribute to water quality conservation. A Day in the Future. CSETI Papers and Press Releases. Giant Crystal Pyramid Discovered In Bermuda Triangle. More pyramids uncovered by Google Earth search.

One of the possible pyramid sites discovered by Angela Micol via Google Earth. Source: Supplied. The Conscious Universe: Chapter 1. What is Psi? Articles and Papers - Scientific Papers - Morphic Resonance - Morphic Fields. Life on Earth… but not as we know it.