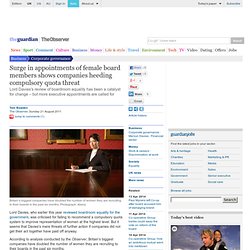 Photograph: Alamy Lord Davies, who earlier this year reviewed boardroom equality for the government, was criticised for failing to recommend a compulsory quota system to improve representation of women at the highest level. But it seems that Davies's mere threats of further action if companies did not get their act together have paid off anyway. According to analysis conducted by the Observer, Britain's biggest companies have doubled the number of women they are recruiting to their boards in the past six months. FTSE 100 firms have appointed 18 women to their boards since 24 February, when Davies told businesses that within four years a quarter of senior bosses should be female. Technically, the six-month due-date falls on Wednesday 25 August, although Davies has given them till the end of the month to make their intentions known.

Distance Learning Universities – Tips for the Global Citizen. CompSci Woman. Top 100 Gender Studies Blogs - Learn-gasm. By Megan Jones Whether you’re pursuing a degree from a top-tier college in women’s studies or taking a few online courses to slowly work towards a degree focused on gender, you can find a number of great blogs online that can supplement your learning experience. 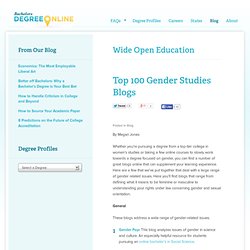 Here are a few that we’ve put together that deal with a large range of gender related issues. Here you’ll find blogs that range from defining what it means to be feminine or masculine to understanding your rights under law concerning gender and sexual orientation. General These blogs address a wide range of gender-related issues. Gender Pop: This blog analyzes issues of gender in science and culture. Feminism These blogs take a feminist point of view when it comes to discussing gender and political issues. Feministing: Authored by Amy S. Scholars These bloggers are professors, students and researchers interested in gender and women’s studies.

Gender Identity and Sexuality Queer Studies Politics and Law. Educational Technology Journals. Blog Archive » Woman in technology. Usually I avoid topics like women in technology because (1) it is a can of worms, and (2) I can really only speak for myself. 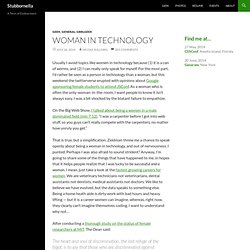 For the most part, I’d rather be seen as a person in technology than a woman, but this weekend the twitterverse erupted with opinions about Google sponsoring female students to attend JSConf. As a woman who is often the only-woman-in-the-room, I want people to know it isn’t always easy. I was a bit shocked by the blatant failure to empathize. On the Big Web Show, I talked about being a women in a male dominated field (min 7:12). “I was a carpenter before I got into web stuff, so you guys can’t really compete with the carpenters, no matter how unruly you get.” That is true, but a simplification. After conducting a thorough study on the status of female researchers at MIT. The heart and soul of discrimination, the last refuge of the bigot, is to say that those who are discriminated against deserve it because they are less good.Dean Robert J. He says it beautifully. Connecting Women and Technology » Anita Borg Institute for Women. 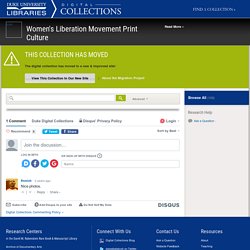 Items range from radical theoretical writings to humourous plays to the minutes of an actual grassroots group. The items in this on-line collection are scanned and transcribed from original documents held in Duke's Special Collections Library. The documents available at this web site were selected by Duke professor Anne Valk to support assignments in her class on the Social History of American Women taught during Spring '97.