GDPR: How to Prepare in the Calm Before the Storm. Wake up! 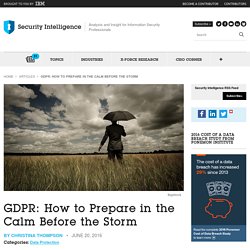 There’s a new data security regulation on the horizon, and it promises to have a big impact on organizations around the globe. The General Data Protection Regulation (GDPR) was signed into law last month, leaving a scant two years for businesses to evaluate their security gaps and fix them in time to be compliant and avoid some extremely hefty fines. The storm clouds are gathering. Read on so you can prepare sufficiently and come out the other side stronger — and more trusted by your customers — than ever. What Is GDPR? GDPR will be replacing the current EU Data Protection Directive over the next two years. 2018 will mark the beginning of widespread unification and standardization of data privacy requirements across 28 EU member states. This new legislation is a step in the right direction: It unifies the patchwork of 28 different privacy laws into one regulation applicable to all. GDPR also requires breach notification without undue delay and, where feasible, within 72 hours. 1.

GDPR: The Data Protection Principles (but not as you know them Jim!) Having recently attended the Information Commissioner’s Office Data Protection Practitioners Conference in Manchester, I should start this blog post by echoing the words of our outgoing Commissioner, Christopher Graham, that the Regulation text is not the final version until later this year when it has been reviewed and fully translated for all 28 member states. 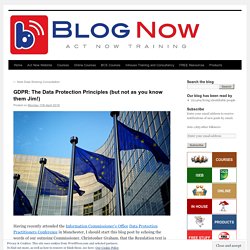 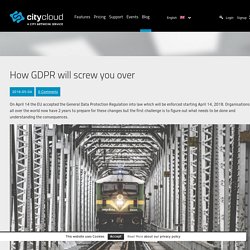 Organisations all over the world now have 2 years to prepare for these changes but the first challenge is to figure out what needs to be done and understanding the consequences. A while ago my boss asked me what the cost would be to become compliant with GDPR and I really couldn’t give him a good answer. My guess was somewhere in the neighbourhood of 100 – 100.000 USD but it was no surprise that my answer was not met with great enthusiasm. Apparently managers tend to want more precise predictions.

GDPR update - new era for EU data protection. The European General Data Protection Regulation (now being commonly referred to as the GDPR) appears to have finally reached the end of the EU legislative pipeline with the vote by the European Parliament today, following its adoption by the (EU) Council at the end of last week. 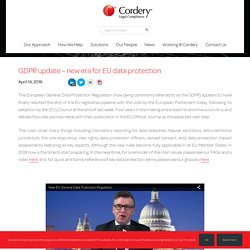 Four years in the making and subject to enormous scrutiny and debate the rules are now ready with their publication in the EU Official Journal as the expected next step. The rules cover many things including mandatory reporting for data breaches, heavier sanctions, extra-territorial jurisdiction, the one-stop-shop, new rights, data protection officers, revised consent, and, data protection impact assessments featuring as key aspects. 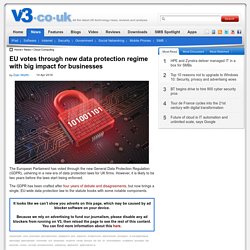 Essential guide: What the EU Data Protection Regulation changes mean to you.