EU-US Data Transfer Safe Harbor Ruled Invalid. Your first step to building a free, personalized, morning email brief covering pertinent authors and topics on JD Supra: JD Supra provides users with access to its legal industry publishing services (the "Service") through its website (the "Website") as well as through other sources. 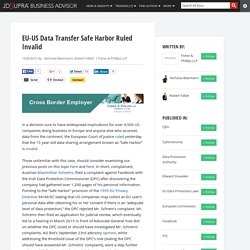 Our policies with regard to data collection and use of personal information of users of the Service, regardless of the manner in which users access the Service, and visitors to the Website are set forth in this statement ("Policy"). By using the Service, you signify your acceptance of this Policy. Information Collection and Use by JD Supra JD Supra collects users' names, companies, titles, e-mail address and industry. The information and data collected is used to authenticate users and to send notifications relating to the Service, including email alerts to which users have subscribed; to manage the Service and Website, to improve the Service and to customize the user's experience. Email Choice/Opt-out - hide. The Latest in the EU’s Post-Safe Harbor Era. October 27, 2015 07:08by Nick Beermann (CIPP/US) In light of the EU’s destruction of the Safe Harbor that we’ve previously discussed in this blog, we take the opportunity to update with the latest from EU Commissioner, Věra Jourová, who, in an address to the EU Parliament’s Civil Liberties, Justice and Home Affairs Committee (“LIBE”) yesterday, stated that there are already agreements “in principle” with the U.S. 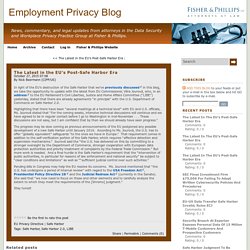 Department of Commerce on Safe Harbor 2.0. Highlighting that there have been “several meetings at a technical level” with EU and U.S. officials, Ms. Jourová stated that “For the coming weeks, intensive technical discussions will continue and we have agreed to be in regular contact before I go to Washington in mid-November . . . These discussions are not easy, but I am confident that by then we should already have seen progress.” The progress may be slow coming as previous announcements of the EU postponed any possible development of a new Safe Harbor until January 2016.

EU Invalidates 'Safe Harbour' US Data-Sharing Agreement. Safe Harbour, introduced in 2000, allows companies to transfer data on EU citizens to the US. 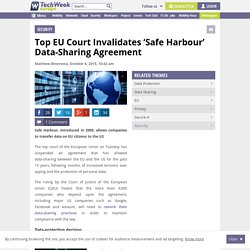 EU-US Data Transfer Safe Harbor Ruled Invalid. Fisher & Phillips LLP. Date: 10/7/2015 In a decision sure to have widespread implications for over 4,500 US companies doing business in Europe and anyone else who accesses data from the continent, the European Court of Justice ruled yesterday that the 15 year-old data-sharing arrangement known as “Safe Harbor” is invalid. 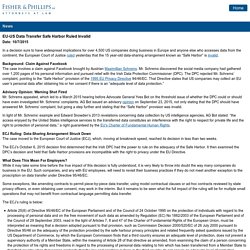 Background: Claim Against Facebook The case involves a claim against Facebook brought by Austrian Maximillian Schrems. Mr. Schrems discovered the social media company had gathered over 1,200 pages of his personal information and pursued relief with the Irish Data Protection Commissioner (DPC). The DPC rejected Mr. Advisory Opinion: Warning Shot Fired Mr. In light of Mr. ECJ Ruling: Data-Sharing Arrangement Struck Down The case moved to the European Court of Justice (ECJ), which, moving at breakneck speed, reached its decision in less than two weeks.

EU-US Data Transfer Safe Harbor Invalid, Rules ECJ. In a decision that is sure to have wide implications for over 4,500 US companies doing business in Europe, the European Court of Justice has just ruled that the 15 year-old data sharing arrangement known as “Safe Harbor” invalid. 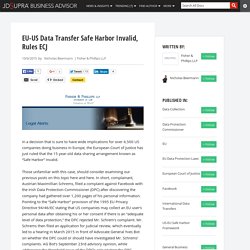 Those unfamiliar with this case, should consider examining our previous posts on this topic here and here. In short, complainant, Austrian Maximillian Schrems, filed a complaint against Facebook with the Irish Data Protection Commissioner (DPC) after discovering the company had gathered over 1,200 pages of his personal information. Pointing to the “Safe Harbor” provision of the 1995 EU Privacy Directive 94/46/EC stating that US companies may collect an EU user’s personal data after obtaining his or her consent if there is an “adequate level of data protection,” the DPC rejected Mr.