How To Make Whipped Cream That Holds Its Shape For Days - Erren's Kitchen. How to Make Buttercream Icing. The BEST Caramel Frosting. Remove from heat and let cool - for at least 30 minutes. 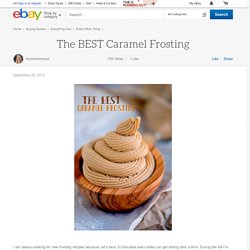 Transfer contents to a mixer bowl and add powdered sugar half a cup a time beating thoroughly in between. Continue beating until frosting is light and fluffy. To make the frosting thicker, add more powdered sugar. To thin, add a teaspoon of milk at a time until desired consistency is reached. Pipe onto cupcakes with a fun piping tip or spread onto cakes with an offset spatula - the choice is up to you! (TRY THIS RECIPE NEXT TIME!!)The BEST Cream Cheese Frosting. Vanilla-Almond Buttercream Recipe - simplysweetsbyhoneybee.com. I planned on posting this right after my Mother’s Day cupcakes post but I started feeling blah this week. 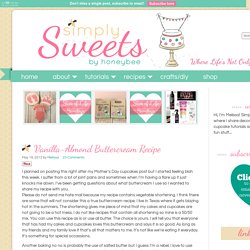 I suffer from a lot of joint pains and sometimes when I’m having a flare up it just knocks me down. I’ve been getting questions about what buttercream I use so I wanted to share my recipe with you. Please do not send me hate mail because my recipe contains vegetable shortening. Buttercream Icing {Video Tutorial} - simplysweetsbyhoneybee.com. Before I share my video tutorial with you I want to talk about the VMA’s. 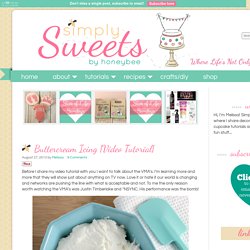 I’m learning more and more that they will show just about anything on TV now. Love it or hate it our world is changing and networks are pushing the line with what is acceptable and not. To me the only reason worth watching the VMA’s was Justin Timberlake and *NSYNC. His performance was the bomb! Ok enough with my soap box. Mother's Day Cupcakes {Video Tutorial} - simplysweetsbyhoneybee.com. Simplysweetsbyhoneybee.com Mother’s Day Cupcakes {Video Tutorial} May 13, 2012 by Melissa 58 Comments. 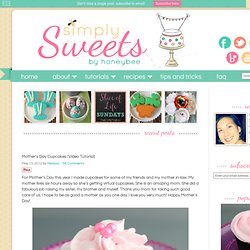 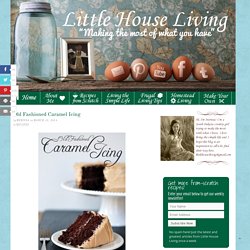 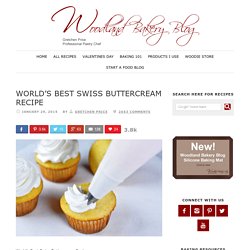 Please read through all the way to the bottom of this post. There is TONS of information here, and there is a great chance you will find your answer! Chocolate Whipped Cream - Woodland Bakery Blog. Stabilized Whipped Cream for Icing Cakes. Stabilized whipped cream for icing cakes sometimes needs a little help to maintain its integrity on cakes that may be expected to hold up for more than a few hours or at maximum a day. 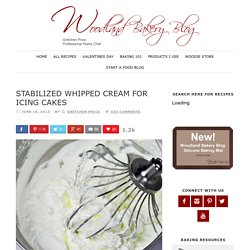 With the help of a little gelatin, you can achieve this. This stabilizer will give your whipped cream creations a longer open window to help increase the beauty and integrity that a freshly whipped cream maintains. For those of you who do not use gelatin, you may substitute agar agar in the same quantities or simply leave it out of hte recipe and you will still have Whipped Cream, just not as stable.

Silky White Chocolate Buttercream. Cioccolata bianca/ white chocolate A friend’s 40th birthday is this week and he decided to have a small gathering at his place. 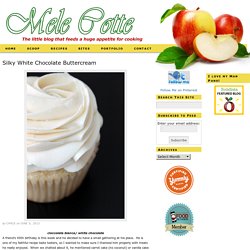 He is one of my faithful recipe taste testers, so I wanted to make sure I thanked him properly with treats he really enjoyed. When we chatted about it, he mentioned carrot cake (no coconut) or vanilla cake with white chocolate icing. He also added, “nothing ‘fancy'”, and something that was “easy to eat”. Cookies and Cups 2 Ingredient White Chocolate Buttercream. This 2 Ingredient White Chocolate Buttercream is the richest, fluffiest white chocolate frosting ever! 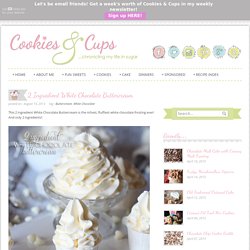 And only 2 ingredients! So a while back I made this 2 Ingredient Easy Chocolate Buttercream frosting. And everyone loved it and couldn’t believe how magic-y it is etc etc. Dark Chocolate and Caramelized White Chocolate Cupcakes. I’ll admit, it’s been a while since I posted a cupcake recipe. 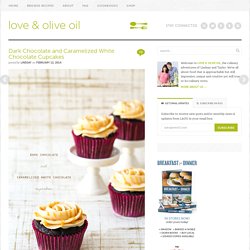 I know that was my “thing” for a while; but lately I’ve found myself choosing cookies and brownies and fancy layer cakes over cutesy cupcakes. I still think there’s something to be said for a good, solid cupcake, however, and by no means do I think they are “over” or “uncool”. Or if they are uncool now, well, then I really don’t care. Don’t let your eyes fool you though. These. Yes, they may be the same perfectly golden color as a decadent dulce de leche, the filling thickly oozing out of the center with the same viscosity as salted caramel. White Chocolate Raspberry Cupcakes. Despite my best efforts, I never seem to be able to use all of the leftovers in the fridge before they go bad. It used to be a big problem here; with the improvements we’ve made over the past year or so, it’s much less of an issue, but still something we need to work on (in other words, we’re still uncovering the occasional science experiment – eeew!).

Every few days I try to pull out those things that have been pushed to the back of the shelves and figure out if I can utilize them in some way. White Chocolate Strawberry Cupcakes - Chocolate Desserts OMG. Strawberry Cupcakes with Strawberry Buttercream Frosting. Share on Pinterest I know, I post a ridiculous amount of cupcakes. But really, can you blame me? White Chocolate Buttercream - The Bewitchin' Kitchen. Archives 2014 has been quite the year for The Bewitchin’ Kitchen. Sweet Potato Cupcakes with Maple Marshmallow Frosting - Overtime Cook.

***Before we start – have you signed up for my email newsletters? You’ll get new recipes, cooking tips, menu suggestions, kitchen deals – and more! Click here to signup.*** You know how people argue over whether the traditional thanksgiving sweet potato casserole topped with marshmallows is too sweet for a side dish? Personally, I don’t see the problem. Enter these phenomenal cupcakes. Cookies and Cups M&M Cupcakes. Decorator's Cream Cheese Frosting. Milk Chocolate Glaze. Basic Ganache and Truffles.