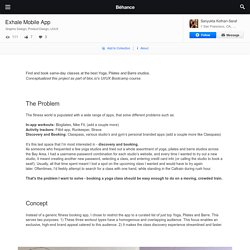 Behance. A guide to paper prototyping & testing for web interfaces — Digital Experience Design. Search. Music Festival Photographer - Robert Burgoine. George McKay: professor, writer, musician. The hot political campaigns of the times filter down to the festival, which expresses its sympathy by sharing its space, as for instance with the noticeable number of miners’ helmets on site in 1984 at the height of the Miners’ Strike, or the march around the site by protesters against the still extraordinary anti-rave clauses of the Criminal Justice and Public Order Act, 1994. 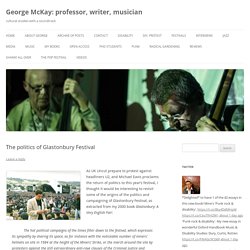 It is in the extra-parliamentary arena that the Glastonbury political ethos is most keenly felt, though. The Economics of Music Festivals  The major music festivals of today are the antithesis of traditional 1960s hippie folklore. 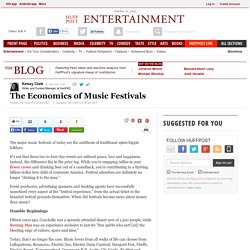 It's not that these two to four-day events are without peace, love and happiness. Instead, the difference lies in the price tag. While you're snapping selfies in your flower crown and drinking beer out of a camelback, you're contributing to a thriving billion-dollar love child of corporate America. Festival attendees are definitely no longer "sticking it to the man. " The Economics of Music Festivals  Feed.fm Blog - FEED.FM. Whether pumping tunes through their brick-and-mortar storefront, licensing directly from artists or their labels for commercials, or sponsoring live performances, music has long been an important branding signature for many companies. 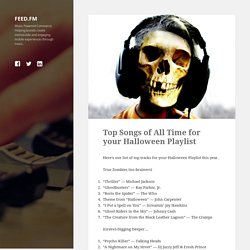 Beyond those traditional integration steps, we’re seeing more brands allocating marketing resources in production by recording and distributing music in a fashion similar to the record labels of yesteryear. We all know that record labels are a tricky business and there is little money to be made in the traditional model. So, why would a big retail brand focus so deeply on supporting music? SXSW PanelPicker. Voting period for this idea type has passed Hear how two of Europes largest festivals use technology to leverage the potential of their festivals. 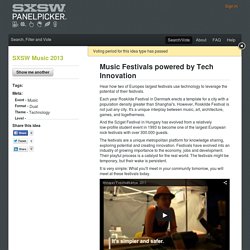 Each year Roskilde Festival in Denmark erects a template for a city with a population density greater than Shanghai's. However, Roskilde Festival is not just any city. It's a unique interplay between music, art, architecture, games, and togetherness. And the Sziget Festival in Hungary has evolved from a relatively low-profile student event in 1993 to become one of the largest European rock festivals with over 300.000 guests. The festivals are a unique metropolitan platform for knowledge sharing, exploring potential and creating innovation. Coachella Reveals Rising Role of Technology for 2015 Summer Concerts.

How festivals are using technology to connect fans, broadcast music and share the love. 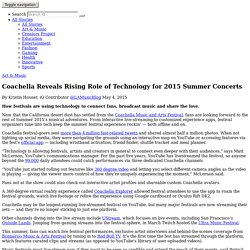 Now that the California desert dust has settled from the Coachella Music and Arts Festival, fans are looking forward to the rest of Summer 2015’s musical adventures. From interactive live-streaming to customized experience apps, festival organizers tune into tech keep the summer festival experience rockin’ — both offline and on. Coachella festival-goers sent more than 4 million fest-related tweets and shared almost half a million photos. When not lighting up social media, they were navigating the grounds using an interactive map on YouTube or accessing features via the fest’s official app — including wristband activation, friend finder, shuttle tracker and meal planner.

“Technology is allowing festivals, artists and creators in general to connect even deeper with their audiences,” says Matt McLernon, YouTube’s communications manager. Tech is also taking festival fan participation to a new level. The World's a Festival - Join Us. Music festivals in the digital age. By Sofie Mikhaylova, Photography by Pooneh Ghana, 16 April 2015 Music festivals have long been a way for music lovers to get together and celebrate the change of sound. 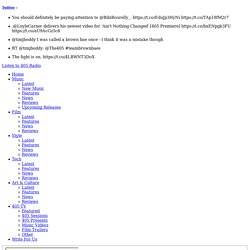 Entering a Musical Haze: How Music Festivals Have Created Their O. Music festivals: the sound of escapism. You fetch up at a festival, bop to the bands, get trashed and then hunker down in your sleeping bag for a nice bit of shut-eye. 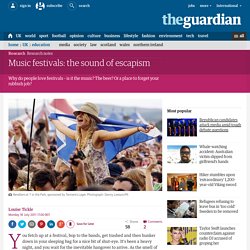 It's been a heavy night, and you wait for the inevitable hangover to arrive. TomorrowWorld. ‘Waze para transporte público’, Moovit agora integra táxis. 6 Tips for Designing Graphics on Mobile Devices. By Calvin Sellers on 09/09/13 at 9:27 pm Designing effective graphics for mobile devices is a challenge. 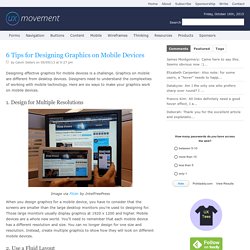 Graphics on mobile are different from desktop devices. Designers need to understand the complexities of working with mobile technology. Here are six ways to make your graphics work on mobile devices. How does graphic designing for mobile apps work? Get Inspired: Big Brands Using Content Marketing. The Value in Content Engagement—that’s the buzzword. 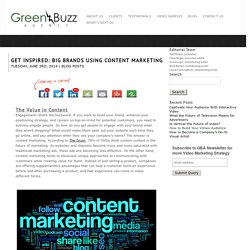 If you want to build your brand, enhance your positioning strategy, and remain on top-on-mind for potential customers, you need to actively engage people. So how do you get people to engage with your brand when they aren’t shopping? Six Brands, One Festival: How to Leverage Branded Engagements at Coachella. SXTXState. The festival model has taken the music industry by storm: Austin City Limits, Coachella, Bonnaroo and Lollapalooza have all revolutionized how music is discovered and consumed. This panel consisted of Andrew Klein of AEG Live, Hank Neuberger of Springboard Productions, Jimmy Chamberlin of LiveOne Group (and former drummer of the Smashing Pumpkins), and moderator John Petrocelli of Bulldog Digital Media.

All four of these men have made a great impact on the music industry, and are now working on developing more ways for music enthusiasts to consume their content, specifically from these renowned music festivals. The conversation began with a discussion about the current state of the music industry in the ever growing digital space. Chamberlin believes that the opportunities for live streaming of music events have endless possibilities. Get Inspired: Big Brands Using Content Marketing. Princípios do Manifesto Ágil para um design mais simples - Você deve estar ciente de que projetar sites para a internet não é tarefa fácil. É importante ter clareza de onde se quer chegar antes de botar a mão no código ou no software gráfico. Brands and the Big Stage: Concert Goers Favor Brands that Engage Them through Music. Brands are using music as a way to connect with their consumers now more than ever. In fact, U.S. music fans actually feel more favorable toward brands that engage them through their favorite tunes, according to Nielsen’s Music 360 report.

20 Marketing Ideas From Music Festivals: Activations From Heineken, Lacoste, Hostess, and More. Search. The GRAMMY Effect: How Music's Biggest Night Drives Sales and Artist Engagement. With its high number of engaged viewers, the GRAMMY Awards can have a positive impact on music sales for nominated and winning artists. But these days, album and song sales are just a part of the fragmented music ecosystem. Music consumption today is more accurately measured by multiple metrics—sales, streams, airplay and social—providing the most accurate view of how an artist is truly resonating with fans. Even artists who enjoy huge levels of sales, streams and airplay can find new audiences and realize significant increases as a result of the GRAMMYs.

Hip-Hop Nation: How the Genre Is Turning It Up in 2015. Summer, summer, summertime—this is most definitely the season of hip-hop. The Essence Music Festival attracted nearly half a million attendees to New Orleans over the July 4th weekend, and a few weeks ago, the Brooklyn Hip Hop Festival filled the New York City borough with art exhibits, film screenings, panel discussions and performances (including a classic surprise appearance by Foxy Brown at the end of Common’s show).

The surging popularity of these festivals highlights the genre’s growing momentum across the board. According to the 2015 Nielsen Mid-Year Music U.S. A Sound Opportunity: How Brands Connect With Consumers at Summer Music Fests. June has hit full-stride, and so has the summer music festival season. The Governors Ball in New York City got the month started, with Drake’s super tight pants almost breaking the Internet, which was quickly followed by Bonnaroo.