Don't be scared of spiders

Why Do We Need Trees? Arbor Day is an annual holiday that celebrates trees. 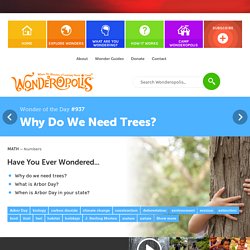 The name, in fact, comes from the Latin word arbor, which means tree. Each arbor Day, people are encouraged to plant and care for trees. arbor Day got started on April 10, 1872, in Nebraska City, Nebraska. J. Sterling Morton, a respected agriculturalist who served as President Grover Cleveland's Secretary of Agriculture, came up with the idea for arbor Day as a way to encourage individuals and civic groups to plant trees. Although National arbor Day is the last Friday in April, many states observe arbor Day on a different date based upon the best time to plants trees locally. Why is it important to plant trees? In addition to these scientific roles, trees are beautiful to look at; and many trees provide fruit, such as apples and oranges. Rainforest Concern - What can we do to stop deforestation? There are lots of other things you can do that will make a difference to the world’s rainforests, as well as your local environment. 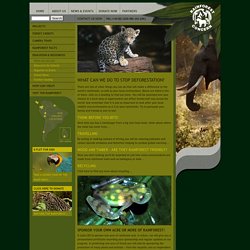 Below are listed a few of them: click on a heading to find out more. You will be surprised how your choices in a local shop or supermarket can affect forests half way across the world! And remember that it is just as important to look after your local wildlife and environment as it is to save rainforests. Try to persuade your family and friends to join in too! Next time you buy a hamburger from a big fast food chain, think about where the meat has come from... Cheryl Hayashi: The magnificence of spider silk. Spider Silk for Wound Healing - RWTH AACHEN UNIVERSITY - English. Spiders spin a lot and their silk is extremely sturdy. 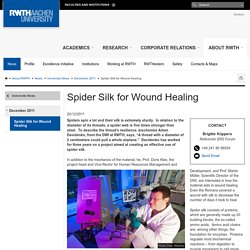 In relation to the diameter of its threads, a spider web is five times stronger than steel. To describe the thread’s resilience, biochemist Artem Davidenko, from the DWI at RWTH, says, “A thread with a diameter of 2 centimeters could pull a whole airplane.” Davidenko has worked for three years on a project aimed at creating an effective use of spider silk. Photo: Peter WinandyCaption: Spiders are the focus of a research project on aiding in wound healing at the DWI of RWTH. In addition to the mechanics of the material, he, Prof. Spider silk consists of proteins, which are generally made up 20 building blocks, the so-called amino acids. Cannibalism complicates biotechnical production “Worldwide, there are 40,000 types of spiders, but it is tedious to commercially produce silk using natural methods. UA News. The study of spider webs has led to a discovery that will generate new kinds of medical sutures embedded with medication. 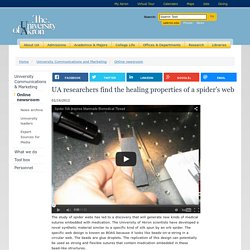 The University of Akron scientists have developed a novel synthetic material similar to a specific kind of silk spun by an orb spider. The specific web design is known as BOAS because it looks like beads-on-a-string in a circular web. The beads are glue droplets. The replication of this design can potentially be used as strong and flexible sutures that contain medication embedded in these bead-like structures. Save the Spiders!

The noble but oft-maligned spider -- many fear them, loathe them, and seek to eliminate their kind. 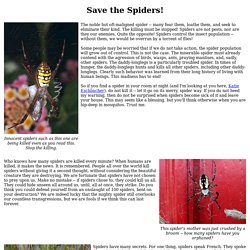 The killing must be stopped! Spiders are not pests, nor are they our enemies. Quite the opposite! Spiders control the insect population -- without them, we would be overrun by a torrent of flies! Some people may be worried that if we do not take action, the spider population will grow out of control. Discoverer Login. How are spiders helpful to people and the planet? World's Largest Spider. How Spiders Spin Their Silk, and Why It Can Help Humans. “Remarkable” Spider Eats Mostly Mosquitoes—Could It Fight Malaria? Hate spiders? 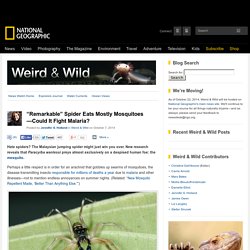 The Malaysian jumping spider might just win you over. New research reveals that Paracyrba wanlessi preys almost exclusively on a despised human foe: the mosquito. Perhaps a little respect is in order for an arachnid that gobbles up swarms of mosquitoes, the disease-transmitting insects responsible for millions of deaths a year due to malaria and other illnesses—not to mention endless annoyances on summer nights.

(Related: “New Mosquito Repellent Made, ‘Better Than Anything Else.'”) “Many other animals, including other spiders, may sometimes eat mosquitoes,” study co-author Fiona Cross, a biologist at New Zealand’s University of Canterbury and the International Centre of Insect Physiology and Ecology, said by email. Don't judge a book by its cover. The English idiom "don't judge a book by its cover" is a metaphorical phrase which means "you shouldn't prejudge the worth or value of something, by its outward appearance alone".[1] Early reference[edit] In George Eliot's The Mill on the Floss (1860), Mr Tulliver uses the phrase in discussing Daniel Defoe's The History of the Devil, saying how it was beautifully bound.The preceding version was then publicised by the 1946 murder mystery novel by Edwin Rolfe and Lester Fuller, Murder in the Glass Room, in the form of "You can never tell a book by its cover. 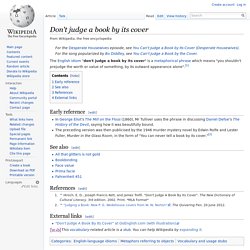