Six Flags Discovery Kingdom. The ocean has a new king of swing. 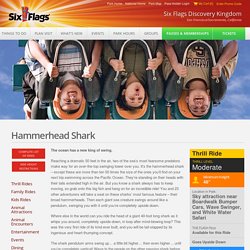 Reaching a dramatic 50 feet in the air, two of the sea’s most fearsome predators make way for an over-the-top swinging tower over you. It’s the hammerhead shark – except these are more than ten 50 times the size of the ones you’ll find on your next trip swimming across the Pacific Ocean. They’re standing on their heads with their tails extended high in the air. But you know a shark always has to keep moving, so grab onto this big fish and hang on for an incredible ride! You and 23 other adventurers will take a seat on these sharks’ most famous feature – their broad hammerheads. Where else in the world can you ride the head of a giant 40-foot long shark as it whips you around, completely upside down, in loop after mind-blowing loop?

The shark pendulum arms swing up… a little bit higher… then even higher… until you’re completely vertical! Hammerhead Shark - Shark Facts and Information. Facts about Hammerhead Sharks Many individuals find the hammerhead shark to be one of the most fascinating. 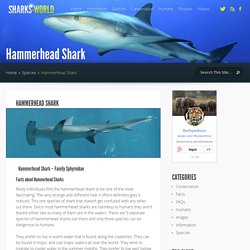 The very strange and different look it offers definitely gets it noticed. This one species of shark that doesn’t get confused with any other out there. Great Hammerhead Sharks, Sphyrna mokarran ~ MarineBio.org. Advertising appears to be blocked by your browser.Please note that advertising helps us host our projects.If you find these ads intrusive or inappropriate, please contact us. 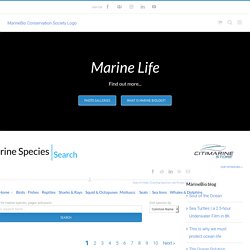 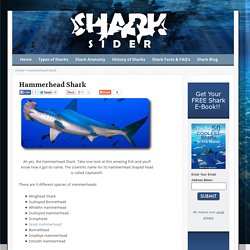 Take one look at this amazing fish and you’ll know how it got its name. The scientific name for its hammerhead shaped head is called Cephalofil. Hammerhead shark. The hammerhead sharks are a group of sharks in the family Sphyrnidae, so named for the unusual and distinctive structure of their heads, which are flattened and laterally extended into a "hammer" shape called a "cephalofoil". 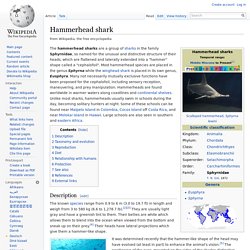 Most hammerhead species are placed in the genus Sphyrna while the winghead shark is placed in its own genus, Eusphyra. Many not necessarily mutually exclusive functions have been proposed for the cephalofoil, including sensory reception, maneuvering, and prey manipulation. Hammerheads are found worldwide in warmer waters along coastlines and continental shelves.

Unlike most sharks, hammerheads usually swim in schools during the day, becoming solitary hunters at night. Some of these schools can be found near Malpelo Island in Colombia, Cocos Island off Costa Rica, and near Molokai Island in Hawaii. Description[edit] Hammerheads have disproportionately small mouths and seem to do a lot of bottom-hunting. Hammerhead Facts — SEEtheWILD Wildlife Conservation Travel. There are nine species of hammerhead sharks worldwide in the family Sphyyrnidae. 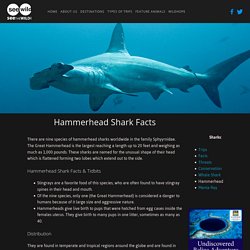 The Great Hammerhead is the largest reaching a length up to 20 feet and weighing as much as 1,000 pounds. These sharks are named for the unusual shape of their head which is flattened forming two lobes which extend out to the side. Hammerhead Shark Facts & Tidbits Stingrays are a favorite food of this species, who are often found to have stingray spines in their head and mouth.Of the nine species, only one (the Great Hammerhead) is considered a danger to humans because of it large size and aggressive nature.Hammerheads give live birth to pups that were hatched from egg cases inside the females uterus.

They give birth to many pups in one litter, sometimes as many as 40. Distribution They are found in temperate and tropical regions around the globe and are found in both nearshore and offshore waters usually between 1-300 meters in depth. Status Learn more about threats to sharks here. Great Hammerhead Shark - Shark Research Institute. Sphyrna mokarran WHAT TO LOOK FORHammer-shaped head with a nearly straight anterior margin. 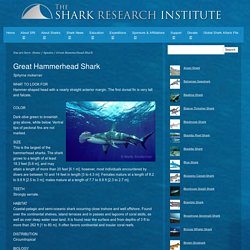 The first dorsal fin is very tall and falcate. Dark olive green to brownish gray above, white below. Ventral tips of pectoral fins are not marked. Marine Conservation Science Institute. Sharks. Great Hammerhead Shark Adventure Aquarium has the distinction of being the only aquarium in the United States with a great hammerhead shark on exhibit. 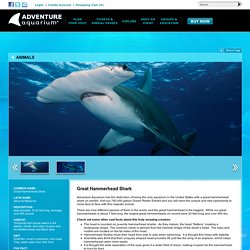 Visit our 760,000 gallon Ocean Realm Exhibit and you will have the unique and rare opportunity to come face to face with this majestic animal. There are nine different species of them in the world, and the great hammerhead is the biggest. While our great hammerheads is about 7 feet long, the largest great hammerheads on record were 20 feet long and over 950 lbs. Check out some other cool facts about this truly amazing creature: Scalloped Hammerhead Shark Creature Feature - Diving with Hammerheads. Diving with sharks is a popular pursuit but not all shark dives are the same. 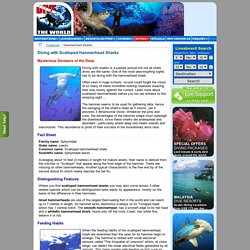 One of the most awe-inspiring sights has to be diving with the hammerhead shark. Often seen in huge schools, no-one could forget the vision of so many of these incredible looking creatures weaving their way slowly against the current. Learn more about scalloped hammerheads before you too are witness to this amazing sight ...

The hammer seems to be used for gathering data, hence the swinging of the shark's head as it swims, yet it prevents 3 dimensional vision. Whatever the pros and cons, the advantages of the hammer shape must outweigh the drawbacks, since these sharks are widespread and abundant - particularly where deep sea meets islands and sea-mounts. Fact Sheet Family name: SphymidaeOrder name: LewiniCommon name: Scalloped hammerhead sharkScientific name: Sphymidae lewini Distinguishing Features. Making Strides in Shark Conservation. Published August 14, 2014 Shark advocates rejoice! 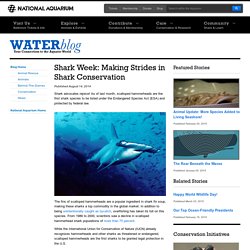 Hammerhead sharks are silver-grey to grey-brown in colour with white undersides. Like all sharks, the Hammerhead sharks have electrolocation (use of electrical impulses) sensory pores called 'ampullae of Lorenzini' (special sensing organs, forming a network of jelly-filled canals found on cartilaginous fishes). Hammerhead Shark (Sphyrna Zygaena) HAMMERHEAD SHARK. Encyclopedia Britannica. Hammerhead Shark. Hammerhead Sharks - Hammerhead Pictures - Shark Facts - National Geographic. Hammerhead sharks are consummate predators that use their oddly shaped heads to improve their ability to find prey. Their wide-set eyes give them a better visual range than most other sharks. And by spreading their highly specialized sensory organs over their wide, mallet-shaped head, they can more thoroughly scan the ocean for food.

One group of sensory organs is the ampullae of Lorenzini, which allows sharks to detect, among other things, the electrical fields created by prey animals. The hammerhead's increased ampullae sensitivity allows it to find its favorite meal, stingrays, which usually bury themselves under the sand. Hammerhead Shark.