Home. Tatchit's DeviantArt Gallery. 20 Mind-Blowing European Pagan Costumes Still Used Today - Earthables. With spring creeping around the corner at what can only be described as a glacial pace, it's a good time to take a look at some of the pagan traditions practiced in remote European towns annually between January and March to herald its arrival. 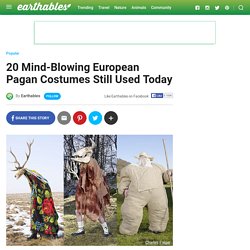 Perhaps if the West collectively dressed up and performed sacrifices to the old gods, spring would get here faster. Croatia Czech Republic Finland Switzerland Sardinia This impressive series of pictures were taken by Charles Fréger for his book Wilder Mann. Germany Germany Greece Romania. Miata - Album on Imgur. Sweet Drink Print / crysanthemum. SCA Artisan Love: THL Eva vanOldeBroek (+ Beginner Sprang Tutorial) - Artisans - artisan love doll sprang - Honor Before Victory. [This is the second in a series of articles on SCA artisans who inspire, teach, encourage, and/or make the Society a better place for us all! 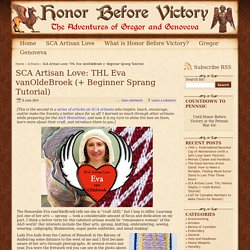 I learned so much through other artisans while preparing for the A&S Pentathlon, and now it is my turn to shine the love on them, learn more about their craft, and introduce them to you.] The Honorable Eva vanOldeBroek tells me she is “craft ADD,” but I beg to differ. Dark Forest Photo Contest. Astronomy Picture of the Day Archive. Digital Photography 101: How to photograph meteor showers - Steve's Digicams. In an earlier edition of our low-light photography series, we talked about how to photograph the moon and stars. 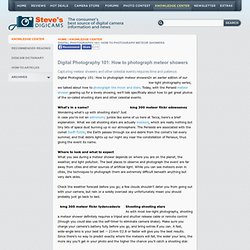 Today, with the Perseid meteor shower gearing up for a lovely showing, we'll talk specifically about how to get great photos of the so-called shooting stars and other celestial events. What's in a name? Wondering what's up with shooting stars? The Milky Way « Nick Ulivieri Photography. Venus as a Morning Star, 2014. As in 2012, Venus is a brilliant Morning Star for most of 2014. 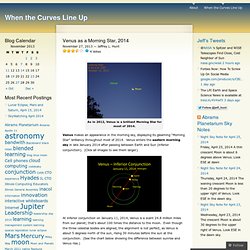 Venus makes an appearance in the morning sky, displaying its gleaming “Morning Star” brilliancy throughout most of 2014. Venus enters the eastern morning sky in late January 2014 after passing between Earth and Sun (inferior conjunction). (Click all images to see them larger.) At inferior conjunction on January 11, 2014, Venus is a scant 24.8 million miles from our planet; that’s about 100 times the distance to the moon. Even though the three celestial bodies are aligned, the alignment is not perfect, as Venus is about 5 degrees north of the sun, rising 30 minutes before the sun at the conjunction. National Geographic. Photograph by Jim Richardson Contributing editor Jim Richardson is a photojournalist recognized for his exploration of environmental issues and advocacy for the night sky. 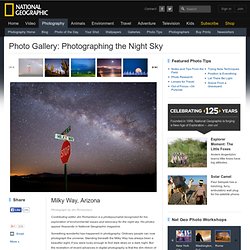 His photos appear frequently in National Geographic magazine. Something wonderful has happened in photography: Ordinary people can now photograph the universe. Standing beneath the Milky Way has always been a beautiful sight, if you were lucky enough to find dark skies on a dark night. But the revelation of recent advances in digital photography is that the dim ribbon of silvery light we see with our naked eyes is actually a glorious, stupendous galaxy. Shoot for the Stars Go for great images of the night sky. How to Photograph the Milky Way in 12 Steps (With 6 Epic Examples) Jason Little is a photographer (shooting macros, portraits, candids, and the occasional landscape), part time writer, and full time lover of music. 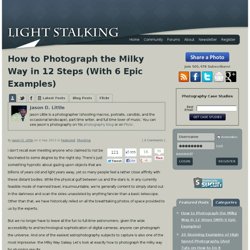 You can see Jason’s photography on his photography blog or on Flickr. By Jason D. Little on in Featured, Shooting I don’t recall ever meeting anyone who claimed to not be fascinated to some degree by the night sky. How to Photograph the Milky Way the Easy Way. Last week, I took a photo of the Milky Way above an old schoolhouse building in Idaho. 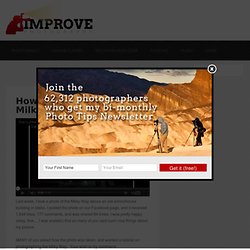 I posted the photo on our Facebook page, and it received 1,548 likes, 177 comments, and was shared 84 times. I was pretty happy (okay, fine… I was ecstatic) that so many of you said such nice things about my picture. MANY of you asked how the photo was taken, and wanted a tutorial on photographing the Milky Way. Your wish is my command. If you are subscribed to this website via email and don’t get the videos associated with my posts, be sure to check out the on-location video of me photographing the Milky Way here. Ten Steps to Photograph the Milky Way. March 31, 2013 • A camera body with high ISO capabilities, preferably a full frame sensor. 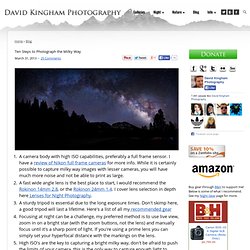 I have a review of Nikon full frame cameras for more info. How to Take Photos of the Milky Way. To capture the Milky Way, you will need to (1) go to a place with little or no light pollution (like in the province), (2) use a camera with manual settings, and (3) use a sturdy tripod. 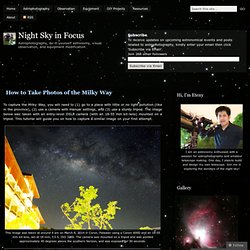 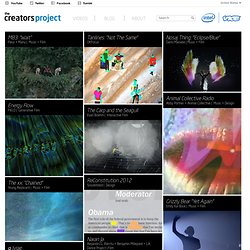