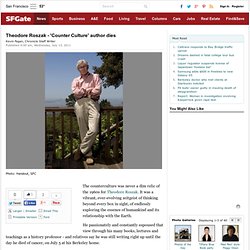 It was a vibrant, ever-evolving zeitgeist of thinking beyond every box in sight, of endlessly exploring the essence of humankind and its relationship with the Earth. He passionately and constantly espoused that view through his many books, lectures and teachings as a history professor - and relatives say he was still writing right up until the day he died of cancer, on July 5 at his Berkeley home. Mr. Roszak, author of 21 books including 1969's "The Making of a Counter Culture," considered one of the landmark books defining the Baby Boomer generation, was 77 years old.

Although he was born into a middle class household, his family was severely impacted by the Great Depression, ushering him into the ranks of those who know what it's like to go hungry. Freire recalled that poverty and hunger severely affected his ability to learn and ultimately influenced his decision to dedicate his life to improving the lives of the poor: "I didn't understand anything because of my hunger.

I wasn't dumb. It wasn't lack of interest. My social condition didn't allow me to have an education. Freire's family's financial situation eventually improved enough for him to enroll at the University of Recife, where he earned a law degree. The Brazilian government ultimately invited Freire to return from his 15 years of exile. English Language Publications Extension o comunicacion? Millfield Senior School: Home. Ivan Illich: deschooling, conviality and the possibilities for informal education and lifelong learning. Ivan Illich: deschooling, conviviality and lifelong learning. 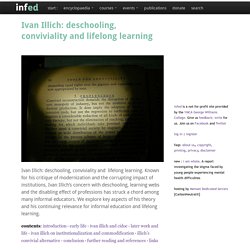 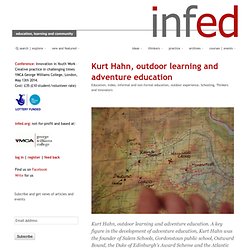 German educationalist, born in Berlin, who founded the Salem Schools (Castle Salem 1920), Gordonstoun public school (1934). Outward Bound (1941), the Duke of Edinburgh’s Award Scheme (1954 – 6) and the Atlantic Colleges (1957). Kurt Hahn was educated at Wilhelm Gymnasium, Berlin, University of Göttingen and Christ Church, Oxford (where he studied philosophy and classics). He also had spells at a number other universities. Early on he decided to be a schoolmaster. Kurt Hahn valued the contribution of English public school education to the development of ’rounded’ character (his first port of call were some of the more progressive institutions such as Abbotsholme – but he later came to admire more traditional boarding schools. Exhibit 1: The seven laws of Salem These principles were set out in a document written in 1930 (and quoted in Flavin 1996: 15 – 17). 1. 2. 3. 4. 5. 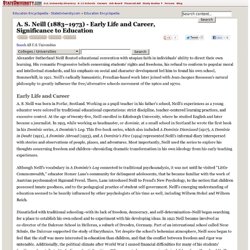 His romantic Progressive beliefs concerning students' rights and freedoms, his refusal to conform to popular moral and intellectual standards, and his emphasis on social and character development led him to found his own school, Summerhill, in 1921. Neill's radically humanistic, Freudian-based work later joined with Jean-Jacques Rousseau's natural philosophy to greatly influence the free/alternative schools movement of the 1960s and 1970s. Early Life and Career A. S. Although Neill's vocabulary in connected to traditional psychoanalysis, it was not until he visited "Little Commonwealth," educator Homer Lane's community for delinquent adolescents, that he became familiar with the work of Austrian psychoanalyst Sigmund Freud. Montessori Method. Steiner Education. Basic Reading. Friedrich Froebel created Kindergarten and designed the Froebel Gifts and Blocks. 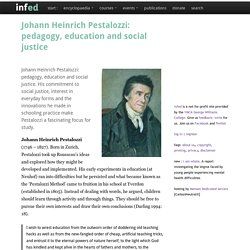 Born in Zurich, Pestalozzi took up Rousseau’s ideas and explored how they might be developed and implemented. His early experiments in education (at Neuhof) ran into difficulties but he persisted and what became known as the ‘Pestalozzi Method’ came to fruition in his school at Yverdon (established in 1805). Instead of dealing with words, he argued, children should learn through activity and through things. They should be free to pursue their own interests and draw their own conclusions (Darling 1994: 18).

I wish to wrest education from the outworn order of doddering old teaching hacks as well as from the new-fangled order of cheap, artificial teaching tricks, and entrust it to the eternal powers of nature herself, to the light which God has kindled and kept alive in the hearts of fathers and mothers, to the interests of parents who desire their children grow up in favour with God and with men. Exhibit 1: William H. Personality is sacred.