Sir Ken Robinson and Montessori - Montessori Education. The Montessori Method: A Self-Education Mindset For Creating Innovators. Worksheets/Printouts - wikisori. This page contains over 500 links to free worksheets and printouts you can use at home or in the classroom. 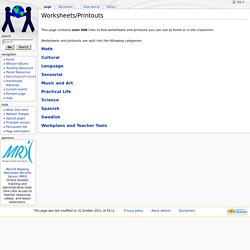 Worksheets and printouts are split into the following categories: Math Cultural Language Sensorial Music and Art Practical Life Science Spanish Swedish. Johanneberg Montessori. How Maria Montessori Defied Mussolini and Changed the World. By: Tony Traficante, ISDA Contributing Editor Maria, a beautiful and young Italian woman, stood at the doorway of her future — one of Italy’s medical schools — eagerly waiting to enter, only to be greeted by unfriendly students and professors, muttering, “Che vergogna,” for shame! 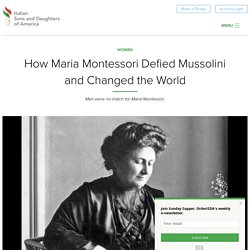 Why the fuss? Well, it was once an all-male school, and now it was not! For young Maria Montessori, it was such an unexpected situation. All she wanted was the opportunity to be a doctor. Maria was born August 31, 1870, in the town of Chiaravalle, Le Marche, Italia, to parents Alessandro and Renilde Stoppani-Montessori. Maria’s determination to get an education began at age 13 when she enrolled in an all-boys technical school, where she had hoped to start her training as an Engineer. Montessori a historical perspective by The Montessori Foundation. Dr. Maria Montessori: A Historical Perspective. The Italian Ministry of Education did not welcome this idea, and she was denied access to school-aged children. 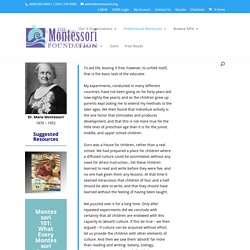 Frustrated in her efforts to carry the experiment on with public school students, in 1907 Montessori jumped at the chance to coordinate a day-care center for working-class children who were too young to attend public school. This first Casa dei Bambini, or Children’s House, was located in the worst slum district of Rome, and the conditions Montessori faced were appalling. Her first class consisted of fifty children from two through five years of age, taught by one untrained caregiver. The children remained at the center from dawn to dusk while their parents worked. 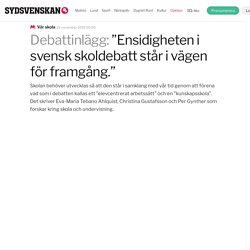 What do fashion and a WMS education have in common? 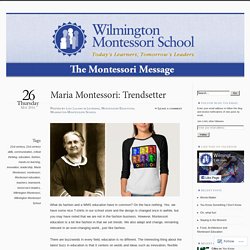 On the face nothing. Yes, we have some nice T-shirts in our school store and the design is changed once in awhile, but you may have noted that we are not in the fashion business. Montessori Synergies Montessori In The 21st Century. By Warren McPherson Keynote Address to MEPI (Montessori Educational Programs International) Conference My dear friends, it has taken four and a quarter billion years of evolution for you to arrive here. 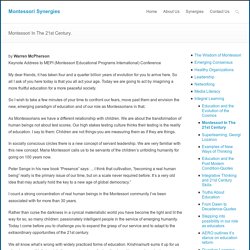 So all I ask of you here today is that you all act your age. Today we are going to act by imagining a more fruitful education for a more peaceful society. So I wish to take a few minutes of your time to confront our fears, move past them and envision the new, emerging paradigm of education and of our role as Montessorians in that. As Montessorians we have a different relationship with children. In socially conscious circles there is a new concept of servant leadership. Peter Senge in his new book “Presence” says: …I think that cultivation, “becoming a real human being” really is the primary issue of our time, but on a scale never required before. 21st Century Learning Skills. The foundation of 21st Century Learning consists of critical thinking and problem-solving, creativity and innovation, communication and collaboration, information technology and media literacy. 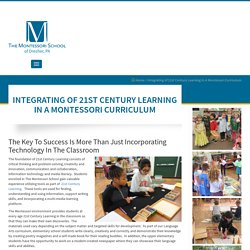 Students enrolled in The Montessori School gain valuable experience utilizing tools as part of 21st Century Learning. These tools are used for finding, understanding and using information, support writing skills, and incorporating a multi-media learning platform. The Montessori environment provides students at every age 21st Century Learning in the classroom so that they can make their own discoveries. The materials used vary depending on the subject matter and targeted skills for development. As part of our Language Arts curriculum, elementary school students write clearly, creatively and correctly and demonstrate their knowledge by creating poetry magazines and a self-made book for their reading buddies. Hands On Experience With 21st Century Learning. Gabriel García Márquez on Montessori — Montessori Education. Does a Montessori Model Work in Public Schools? Ask South Carolina - Inside School Research.

South Carolina's push to bring the century-old Montessori model to public classrooms may be paying off in both student performance and creativity, according to a new longitudinal evaluation. 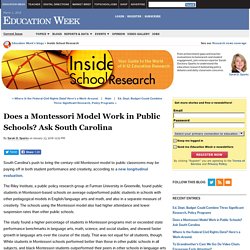 The Riley Institute, a public policy research group at Furman University in Greenville, found public students in Montessori-based schools on average outperformed public students in schools with other pedagogical models in English/language arts and math, and also in a separate measure of creativity. The schools using the Montessori model also had higher attendance and lower suspension rates than other public schools. The study found a higher percentage of students in Montessori programs met or exceeded state performance benchmarks in language arts, math, science, and social studies, and showed faster growth in language arts over the course of the study. That was not equal for all students, though. Recension: Montessoris pedagogiska imperium. Montessoris pedagogiska imperium — kulturkritik och politik i mellankrigstidens Montessorirörelse Christine Quarfood. 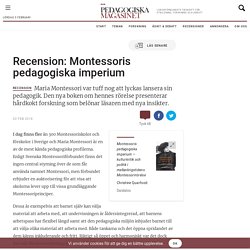 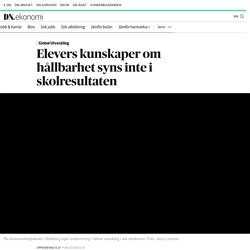 Study Finds Montessori Schools Level the Playing Field for Disadvantaged Kids. Researchers and educators have identified early childhood as one of the most important developmental periods in a person’s life, setting in place patterns that can predict life outcomes. This is not surprising given the fact that the human brain goes through profound changes in the first six years, most of which appear to be permanent. In addition, economic analyses have shown that educational interventions aimed at preschool programs have the highest return on investment.

Montessori Preschool Elevates and Equalizes Child Outcomes: A Longitudinal Study. Introduction Optimizing preschool education is important from both economic and developmental standpoints (Heckman, 2006; Blair and Raver, 2016). The human brain undergoes marked development in the first 6 years, and the environment interacts with gene expression producing changes that appear to be permanent (Zhang and Meaney, 2010). Furthermore, neural development proceeds in a hierarchical fashion, with later attainments built on earlier ones (Merzenich, 2001). Economic analyses show that the highest rates of return on educational investments in human capital are derived from preschool programs (Heckman, 2006). Yet the two primary examples of successfull early childhood interventions (Perry Preschool and the Abecedarian Project) are from the 1960s (Campbell et al., 2002; Schweinhart et al., 2005) and were small studies with very intensive interventions that would be very expensive (on the order of $20,000/year per child) to implement in today’s dollars (Minervino and Pianta, 2014).

What We Can All Learn from a Montessori Classroom. Blog — Paul Epstein. Presentations — Paul Epstein. 7 key phrases Montessori teachers use and why we should use them, too   - Motherly. Hope4ME Math. Quieting a Class the Montessori Way - NAMC Montessori Teacher Training Blog. We have all been there. All of a sudden, the noise level in the classroom gets so loud, you wonder how anyone can possibly concentrate. Normally, it just takes a quick walk over to the ‘noisy table’ and a quiet word to help the students settle back down. Now, however, it seems like the whole class is noisy. What can you do? My favorite way to quiet and bring calm back to a disruptive environment is to not do anything at all. Raising World Citizens the Montessori Way - Multicultural Kid Blogs. By What do Anne Frank, Larry Page and Sergey Brin (Google founders), Julia Child, Yo-Yo Ma (cellist), Helen Keller, Queen Noor of Jordan, George Clooney, and Gabriel García Márquez (Nobel Peace Prize for Literature winner) have in common?

Besides their notable contributions to our world, they were all Montessori students. Today I’d like to share with you the reasons why I’ve fallen in love with Dr. Influential People Who Attended A Montessori. Traditional classrooms are instructor-centric and involve a general curriculum taught to the entire group at once. For children, this environment is impersonal and often stifles learning, producing inferior developmental and educational outcomes. The Montessori method stands in direct contrast, promoting a child-focused, self-paced learning environment for well-rounded development. This list of influential individuals are known for their creativity, initiative, and self confidence. What do all these independent thinking, self-directed, inventive people have in common? Singer, songwriter, actress and fashion designer, 16-time Grammy award-winner In Houston, at St. Magician, Illusionist, endurance artist. West Suburban Montessori School. Making a Difference – The Montessori Way.

In this section you will find interesting perspectives on Montessori Education from: Quotes from Montessori Graduates: The Montessori educational approach might be the surest route to joining the creative elite, which are so overrepresented by the school’s alumni: Google’s founders Larry Page and Sergei Brin, Amazon’s Jeff Bezos, videogame pioneer Will Wright, and Wikipedia founder Jimmy Wales, not to mention Julia Child.

Larry Page and Sergey Brin, Founders of Google.com credit Their Montessori Education for Much of Their Success On the Barbara Walters ABC-TV Special “The 10 Most Fascinating People Of 2004″ Larry Page and Sergey Brin, founders of the popular Internet search engine Google.com, credited their years as Montessori students as a major factor behind their success. Jeff Bezos Founder of Amazon.com, Inc: The Wizard of Web Retailing “As a preschooler, Jeffrey P. YouTube. Alumni « Mountaineer Montessori School. Montessori education: A priceless gift Every MMS student in the George Washington High School Class of 2014 graduated with honors.

Over the past four decades, Mountaineer Montessori School has served an estimated 1,000 students who’ve gone on to pursue lives filled with learning, achievement and service. Former students consistently tell us their time at MMS provided not only excellent preparation for future academic work, but gave them the priceless gift of a lifetime love of learning. Perhaps the greatest compliment our alumni can pay is by returning to MMS to enroll their own children. Life After Francis W. Parker / Famous Montessori Graduates. Life After Francis W. Parker / Where does a Montessori education lead? Life After Francis W. Parker / Famous Montessori Graduates. Famous People Who Were Educated at Montessori Schools. Montessori students, When I say you are among the people who can change the world I’m not embellishing. I have evidence to muse your young souls. Enjoy, get inspired and inspire! Post brought to you by Apple Press from the facebook page of Young Rembrandts.

YR: The Power of Drawing. Montessori = creativity unleashed. Transformed by Montessori - Paul Epstein Ph.D. Maria Montessori: Her Life and Legacy (Davidson Films, Inc.) Montessori Family Alliance. How The Montessori Method Applies to Today’s Workplace. Written by Barbara Atkinson on March 14, 2017. Originally published on the Evernote blog. “Imagination does not become great until human beings, given the courage and the strength, use it to create.” — Maria Montessori Maria Montessori’s legacy reshaped the field of education, introducing the philosophy that we learn and grow best by following an innate path of self-development. She knew what she was talking about — she was nominated for the Nobel Peace Prize an astounding six times, and her image was even on Italy’s 1,000 Lire banknote.

Movement in Montessori - Primary. A recent article from the New York Times concludes, “We are not thinking about the child as an entire person, how physical activity helps them cope with the stresses of school and actually benefits them in the classroom.” The quote above is from Lindsay DiStefano in the article “Why Kids Shouldn’t Sit Still in Class.” The title caught my attention right away, because movement is something Montessori made integral to her classroom over 100 years ago. The Five Characteristics of Play—And of Montessori Work — Maria Montessori. “The children in our schools have proved to us that their real wish is to be always at work—a thing never before suspected, just as no one had ever before noticed the child’s power of choosing his work spontaneously.