Create Your Own "Neural Paintings" with DeepStyle & Ubuntu. Advertisement Neural networks can do a lot of things. 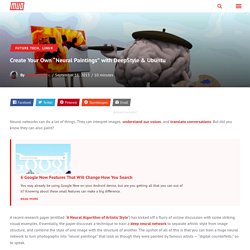 They can interpret images, understand our voices, and translate conversations. But did you know they can also paint? Mad Men finale and Coke: An interview with the real life ad man who created Coca-Cola's "I'd like to buy the world a Coke" campaign. Courtesy of AMC On last night’s Mad Men finale, an epic Don Draper brainstorm produced one of the most legendary commercials of the 20th century, in which a group of multicultural young people sing “I’d like to buy the world a Coke” on a grassy hill. 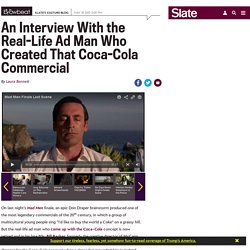 But the real-life ad man who came up with the Coca-Cola concept is now retired and in his late 80s: Bill Backer, formerly the creative director of McCann. In January of 1971, Backer was en route to London to meet up with the music director for the Coca-Cola account when a dense fog grounded him in Ireland.