All Currency Prepaid Cards - MoneySuperMarket. Some prepaid cards allow you to load them up with sterling and then use them anywhere in the word. 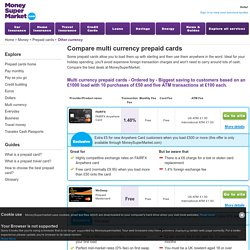 Ideal for your holiday spending, you'll avoid expensive foreign transaction charges and won't need to carry around lots of cash. Compare the best deals at MoneySuperMarket. Prepaid cards are not eligible for protection under the Financial Services Compensation Scheme Other currency prepaid cards Like travellers cheques for the modern holidaymaker or business tripper, foreign currency prepaid cards offer a secure way to take your travel money away with you.

Some prepaid cards allow you to pre-load them with sterling and you can then use them for your holiday spending anywhere in the world, across multiple currencies. Avoid foreign exchange charges Most debit and credit cards charge high fees when you use them abroad. And if you withdraw money from a cash machine, you will often face a further 2% to 3% charge, plus daily interest if you make a withdrawal using a credit card. Stick to a budget. Multicurrency Prepaid Travel Card. How do people manage their expenses when they travel abroad? 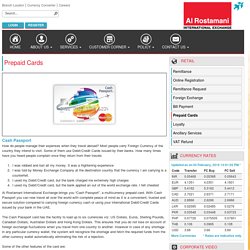 Most people carry Foreign Currency of the country they intend to visit. Some of them use Debit/Credit Cards issued by their banks. How many times have you heard people complain once they return from their travels Al Rostamani International Exchange brings you “Cash Passport”, a multicurrency prepaid card. With Cash Passport you can now travel all over the world with complete peace of mind as it is a convenient, trusted and secure solution compared to carrying foreign currency cash or using your international Debit/Credit Cards issued by your bank in the UAE. The Cash Passport card has the facility to load up to six currencies viz: US Dollars, Euros, Sterling Pounds, Canadian Dollars, Australian Dollars and Hong Kong Dollars. Some of the other features of the card are: What is a multicurrency prepaid travel card.

The Best Startup Pitch Decks. How Eduardo Saverin Sold Facebook Ads in 2004. The knock on Facebook is often that it doesn’t have its ad strategy figured out. 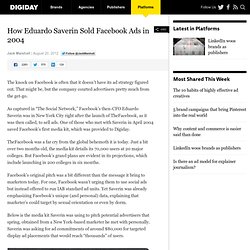 That might be, but the company courted advertisers pretty much from the get-go. As captured in “The Social Network,” Facebook’s then-CFO Eduardo Saverin was in New York City right after the launch of TheFacebook, as it was then called, to sell ads. One of those who met with Saverin in April 2004 saved Facebook’s first media kit, which was provided to Digiday.

TheFacebook was a far cry from the global behemoth it is today. Just a bit over two months old, the media kit details its 70,000 users at 20 major colleges. Facebook’s original pitch was a bit different than the message it bring to marketers today. Below is the media kit Saverin was using to pitch potential advertisers that spring, obtained from a New York-based marketer he met with personally. Ebury: What borders? Financial Services For Businesses. Big IPO, Tiny Payout for Many Startup Workers. Jeff Sutton led the corporate IT team at Box for four years, as the online file-sharing company grew from 50 employees to more than 1,000. 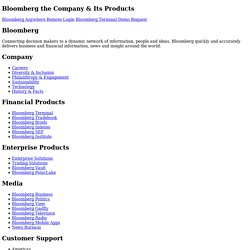 He joined Box from IBM, making about $95,000 a year—forgoing the higher salary somebody with his decade of experience in systems administration could have made so he could collect stock options, roughly 21,000 in all. When Box went public at the beginning of 2015, Sutton’s bet seemed to be paying off. On their first day on the New York Stock Exchange, the company’s $14 shares jumped 66 percent, to $23.23. But Sutton, subject to an employee lockup agreement, had to wait 180 days before he could cash out. By then, the stock had fallen more than 20 percent from that high; it’s now trading at about $13, below its initial public offering price. Let’s be clear: Sutton knows it worked out just fine. The frustrated expectations of early employees like Sutton have become a common thread in the latest round of technology IPOs.