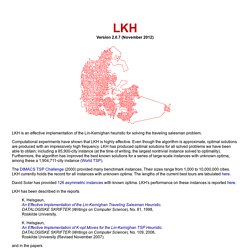 CSV to C structure utility. Reinstalling And Updating Packages. In NuGet 3.x with projects using project.json to list dependencies, installing or updating a package will always install the latest version available from the package source. 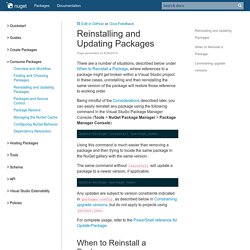 In projects using packages.config, the same behavior applies unless you specifically constrain the version range. For example, if you know that your application will work only with version 1.x of a package but not 2.0 and above, perhaps due to a major change in the package API, then you'd want to constrain upgrades to 1.x versions. This prevents accidental updates that would break the application. A quick tutorial on the Update-Package command. Among the supported commands in NuGet’s Package Manager Console, Update-Package is arguably the most powerful in terms of its supported parameters and switches. 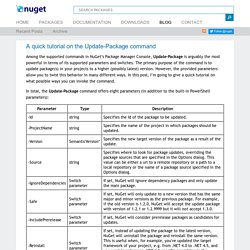 The primary purpose of the command is to update package(s) in your projects to a higher (possibly latest) version. However, the provided parameters allow you to twist this behavior in many different ways. In this post, I’m going to give a quick tutorial on what possible ways you can invoke the command. In total, the Update-Package command offers eight parameters (in addition to the built-in PowerShell parameters): *Although the type of the -Version parameter is SemanticVersion, which is a type declared by NuGet, you can just use string when you set it. With that, here are the common use cases for the Update-Package command:

Оглавление — Problem Solving with Algorithms and Data Structures. Automaton Simulator. Automate the Boring Stuff with Python. In the previous chapter, you learned how to create and write to new files in Python. 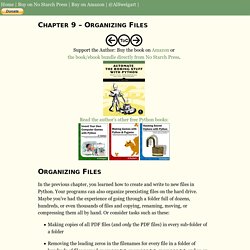 Your programs can also organize preexisting files on the hard drive. Maybe you’ve had the experience of going through a folder full of dozens, hundreds, or even thousands of files and copying, renaming, moving, or compressing them all by hand. Or consider tasks such as these: Making copies of all PDF files (and only the PDF files) in every sub-folder of a folderRemoving the leading zeros in the filenames for every file in a folder of hundreds of files named spam001.txt, spam002.txt, spam003.txt, and so onCompressing the contents of several folders into one ZIP file (which could be a simple backup system) 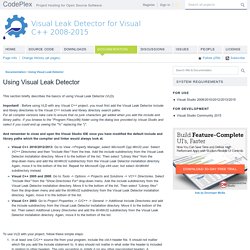 In-Memory Compression and Decompression Using ZLIB. Zlib is a free compression library (a DLL) on which the popular gzip utility is built. 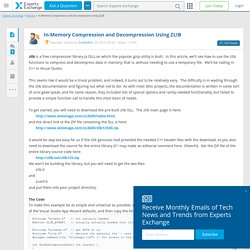 In this article, we'll see how to use the zlib functions to compress and decompress data in memory; that is, without needing to use a temporary file. We'll be coding in C++ in Visual Studio. This seems like it would be a trivial problem, and indeed, it turns out to be relatively easy. The difficulty is in wading through the zlib documentation and figuring out what not to do! As with most GNU projects, the documentation is written in some sort of unix-geek-speak, and for some reason, they included lots of special options and rarely-needed functionality, but failed to provide a simple function call to handle this most basic of needs.

To get started, you will need to download the pre-built zlib DLL. To make this example be as simple and universal as possible, we'll just throw together a console application program. Linking a binary blob with GCC. Wiki:embedding_resources_in_executables [Robin Gareus] I was recently looking for a way to ship an image with an executable without referring to the image as external file. 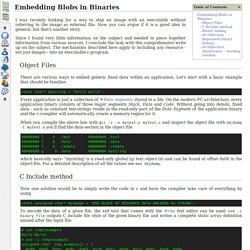 Now you can argue if it is a good idea in general, but that's another story. Since I found very little information on the subject and needed to piece together information from various sources, I conclude the task with this comprehensive write up on the subject. The mechanisms described here apply to including any resource - not just images - into an executable c-program. Object Files There are various ways to embed generic fixed data within an application. 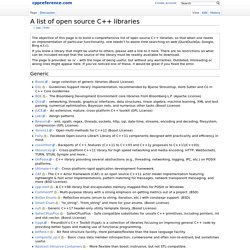 If you know a library that might be useful to others, please add a link to it here. There are no restrictions on what can be included except that the source of the library must be readily available to download. Online regex tester and debugger: JavaScript, Python, PHP, and PCRE. Download Files From Google Drive To Iphone - codegists.com.