Digital Evidence and Forensics. Computers are used for committing crime, and, thanks to the burgeoning science of digital evidence forensics, law enforcement now uses computers to fight crime. 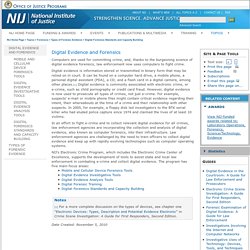 Digital evidence is information stored or transmitted in binary form that may be relied on in court. It can be found on a computer hard drive, a mobile phone, a personal digital assistant (PDA), a CD, and a flash card in a digital camera, among other places.[1] Digital evidence is commonly associated with electronic crime, or e-crime, such as child pornography or credit card fraud. However, digital evidence is now used to prosecute all types of crimes, not just e-crime. For example, suspects' e-mail or mobile phone files might contain critical evidence regarding their intent, their whereabouts at the time of a crime and their relationship with other suspects. In 2005, for example, a floppy disk led investigators to the BTK serial killer who had eluded police capture since 1974 and claimed the lives of at least 10 victims.

Sysinternals and NirSoft both provide helpful utilities for your Windows system but may not be very convenient to access. 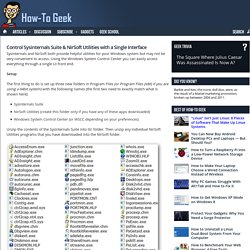 Using the Windows System Control Center you can easily access everything through a single UI front end. Setup The first thing to do is set up three new folders in Program Files (or Program Files (x86) if you are using a 64bit system) with the following names (the first two need to exactly match what is shown here): Sysinternals SuiteNirSoft Utilities (create this folder only if you have any of these apps downloaded)Windows System Control Center (or WSCC depending on your preferences) Unzip the contents of the Sysinternals Suite into its’ folder. All that is left to do is to unzip the WSCC software into its’ folder and create a shortcut. WSCC in Action When you start WSCC up for the first time you will see the following message with a brief explanation about the software. 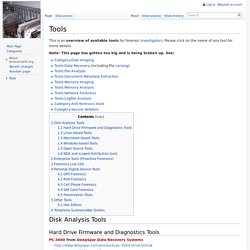 Please click on the name of any tool for more details. Note: This page has gotten too big and is being broken up. See: Hard Drive Firmware and Diagnostics Tools. 21 Popular Computer Forensics Tools. Computer forensics is a very important branch of computer science in relation to computer and Internet related crimes. 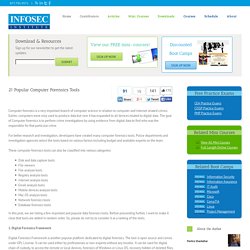 Earlier, computers were only used to produce data but now it has expanded to all devices related to digital data. The goal of Computer forensics is to perform crime investigations by using evidence from digital data to find who was the responsible for that particular crime. For better research and investigation, developers have created many computer forensics tools. Police departments and investigation agencies select the tools based on various factors including budget and available experts on the team. FOSS Tools. I wanted to keep a list of tools as a reference for myself, but also provide it in such a manner that others can make use of the list, as well. 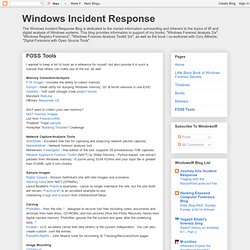 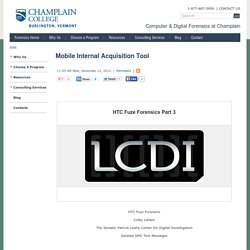 Cellebrite Retrieving Contacts I first started off by adding fake contacts to the HTC Fuze. Large List of Free Forensic Software. While I personally have never gotten into forensics due to liability reasons, it has always been something that has interested me. 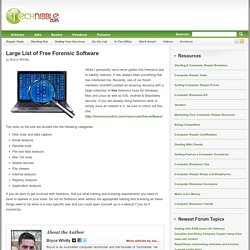 Recently, one of our forum members (mm201) posted an amazing resource with a large collection of free forensics tools for Windows, Mac and Linux as well as iOS, Android & Blackberry devices. If you are already doing forensics work or simply have an interest in it, be sure to check out this site: The tools on the site are divided into the following categories: Disk tools and data captureEmail analysisGeneral toolsFile and data analysisMac OS toolsMobile devicesFile viewersInternet analysisRegistry analysisApplication analysis If you do wish to get involved with forensics, find out what training and licensing requirements you need to have to operate in your state. 10 Data Recovery Tools You Can Download For Free [Windows] It happens to the best of us. 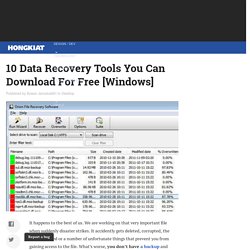 We are working on that very important file when suddenly disaster strikes. It accidently gets deleted, corrupted, the computer died or a number of unfortunate things that prevent you from gaining access to the file. What’s worse, you don’t have a backup and are in desperate need of those important files urgently. Well, don’t fret as it is possible to recover those deleted files. When you delete a file, you don’t actually ‘delete’ it. Beta.techradar. The super-sleuth detectives in TV show CSI have some very nifty tools to help solve crimes. 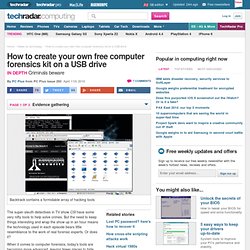 But the need to keep things interesting and wrap the show up in an hour means the technology used in each episode bears little resemblance to the work of real forensic experts. Or does it? When it comes to computer forensics, today's tools are becoming more advanced, leaving fewer places to hide information. This tension between fact and fiction took on a whole new dimension when Microsoft's police-only forensic toolkit was leaked on the internet. 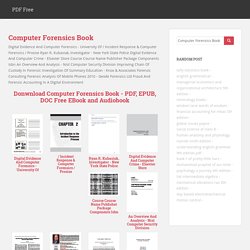