More 'Open Teaching' Courses, and What They Could Mean for Colleges - Wired Campus. Last month we wrote about a professor’s experiment in “open teaching,” in which he allowed anyone to take his online course and fully participate in discussions. 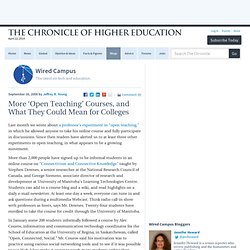 Since then readers have alerted us to at least three other experiments in open teaching, in what appears to be a growing movement. More than 2,000 people have signed up to be informal students in an online course on “Connectivism and Connective Knowledge” taught by Stephen Downes, a senior researcher at the National Research Council of Canada, and George Siemens, associate director of research and development at University of Manitoba’s Learning Technologies Centre.

Understanding design patterns in your everyday work. The concept of design ”patterns” is widely misunderstood. 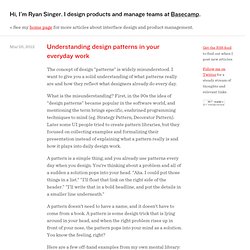 I want to give you a solid understanding of what patterns really are and how they reflect what designers already do every day. What is the misunderstanding? First, in the 90s the idea of “design patterns” became popular in the software world, and mentioning the term brings specific, enshrined programming techniques to mind (eg. Strategy Pattern, Decorator Pattern). Later some UI people tried to create pattern libraries, but they focused on collecting examples and formalizing their presentation instead of explaining what a pattern really is and how it plays into daily design work. A pattern is a simple thing, and you already use patterns every day when you design.

A pattern doesn’t need to have a name, and it doesn’t have to come from a book. Here are a few off-hand examples from my own mental library: You can probably fill a few pages with your own favorite patterns. But there is also more to the story. References:

Suggested OER Reading List (for Academics New to OER) We would like to build up a suggested reading list for academics who are new to OER and would welcome suggestions in this cloud either as comments or links below. 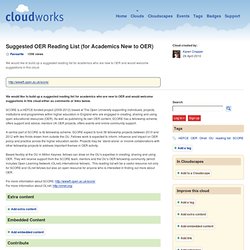 SCORE is a HEFCE-funded project (2009-2012) based at The Open University supporting individuals, projects, institutions and programmes within higher education in England who are engaged in creating, sharing and using open educational resources (OER). As well as publishing its own OER content, SCORE has a fellowship scheme, offers support and advice, mentors UK OER projects, offers events and online community support. A central part of SCORE is its fellowship scheme. SCORE expect to fund 36 fellowship projects between 2010 and 2012 with two thirds drawn from outside the OU. Fellows work is expected to inform, influence and impact on OER policy and practice across the higher education sector. Based flexibly at the OU in Milton Keynes, fellows can draw on the OU’s expertise in creating, sharing and using OER. Learning Objects: Resources For Distance Education Worldwide. 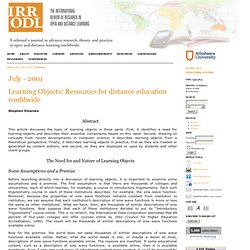 MAODE: Big OER, little OER. It's funny how you take things for granted... 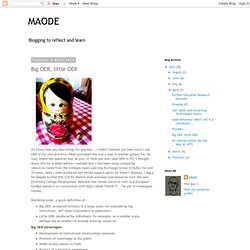 I hadn't realised just how much I use OER in my own practice. What prompted this was a post in another galaxy far, far way, where the question was 'do you, or have you ever used OER in FE? ' I thought about this for a while before I realised that I had been using computing resources/notes from the Colleges Open Learning Exchange Group (COLEG) for over 10 years, heck I even produced and vetted support packs for them!!

Anyway, I dug a bit deeper to find that COLEG doesn't exist anymore and resources from the now [Scottish] College Development Network now utilise Jorum as well as a European funded resource (in conjunction with SQA) called TranSETT - I've yet to investigate further. Rambling aside, a quick definition of... ----------------------------References Weller, M. (2009) Big OER and Little OER. Free learning resources for teachers. Public Engagement as Collateral Damage : The Digital Scholar: How Technology Is Transforming Scholarly Practice. Public Engagement as Collateral Damage This chapter will focus on the third of Boyer's scholarly practices, which he terms ‘application’. 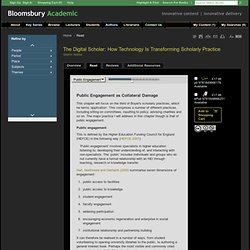 This comprises a number of different practices, including sitting on committees, inputting to policy, advising charities and so on. The major practice I will address in this chapter though is that of public engagement. Public engagement This is defined by the Higher Education Funding Council for England (HEFCE) in the following way (HEFCE 2007): ‘Public engagement’ involves specialists in higher education listening to, developing their understanding of, and interacting with non-specialists.

Gaming. DigitalLiteraciesReview.pdf. BB62B2.pdf. Welcome to ds106. Academic output as collateral damage. Hewlett Foundation. The Evidence on Online Education. WASHINGTON -- Online learning has definite advantages over face-to-face instruction when it comes to teaching and learning, according to a new meta-analysis released Friday by the U.S. 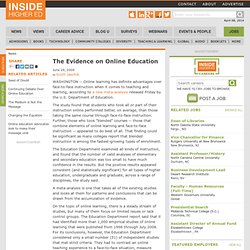 Department of Education. The study found that students who took all or part of their instruction online performed better, on average, than those taking the same course through face-to-face instruction. Further, those who took "blended" courses -- those that combine elements of online learning and face-to-face instruction -- appeared to do best of all. That finding could be significant as many colleges report that blended instruction is among the fastest-growing types of enrollment.

The Education Department examined all kinds of instruction, and found that the number of valid analyses of elementary and secondary education was too small to have much confidence in the results. Using technology to give students "control of their interactions" has a positive effect on student learning, however. John R. The blog for the OU open course in Open Education. WBECReport.