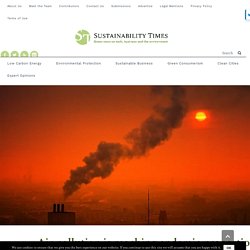 It has been linked to a variety of health conditions from coronary disease to strokes. Air pollution is a potent killer. Need proof? Consider these facts: in the United States alone some 200,000 people succumb to ailments brought on or exacerbated by toxic air. Bangkok Street-Food Stalls Are Trying to Give Up Plastic Bags.

Photographer: Nicolas Axelrod/Bloomberg Two things Thailand is famous for are its delicious street food and its wonderful beaches. 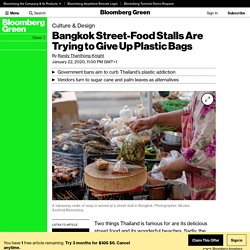 The ultimate utopian visions on film. This Sunday it's International Peace Day, a project set up in the hope that September 21 will become an institutionally recognised day around the world. 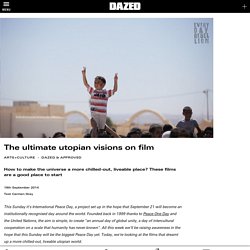 Founded back in 1999 thanks to Peace One Day and the United Nations, the aim is simple, to create "an annual day of global unity, a day of intercultural cooperation on a scale that humanity has never known". The Other Fake Meat Tycoon Is Coming for China’s Pork. For a guy in the food industry, David Yeung talks a lot about how gross food can be. 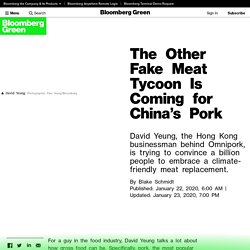 Specifically, pork, the most popular meat in China. Why Coca-Cola Refuses To Ban Plastic Bottles. Coca-Cola will not stop using plastic bottles because it believes many consumers still prefer them. 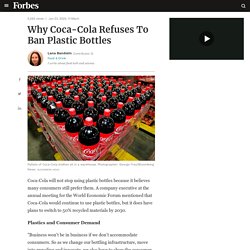 A company executive at the annual meeting for the World Economic Forum mentioned that Coca-Cola would continue to use plastic bottles, but it does have plans to switch to 50% recycled materials by 2030. Plastics and Consumer Demand. RCA grad Laura Kraup Frandsen refused to make final collection. Royal College of Art fashion student Laura Kraup Frandsen has refused to present a physical collection at her graduate show as a protest against overconsumption in the climate crisis. 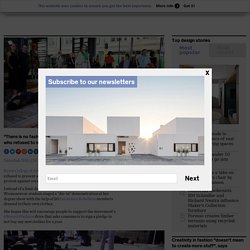 Instead of a final clothing collection, the MA Fashion Womenswear student staged a "die-in" demonstration at her degree show with the help of 20 Extinction Rebellion members dressed in their own clothes. She hopes this will encourage people to support the movement's #BoycottFashion drive that asks consumers to sign a pledge to not buy any new clothes for a year. "By creating a sharp visual contrast between 'dead' people lying on the floor and models walking over them, I wanted people to face the reality of what our consumer behaviour will lead to," Frandsen told Dezeen. "Asking the question: is fashion to die for? " Global fashion industry is hugely polluting. Dezeen. Vogue Italia’s photo-free issue is greenwashing at its finest. 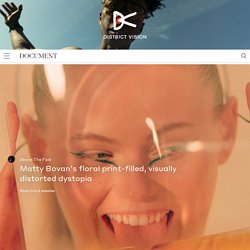 From granny florals to (literally) in-your-face accessories, York-native Matty Bovan presented an unexpected mélange of traditional patterns, reconstructed workwear, and a sprinkle of modern streetwear this London Fashion Week. In Florida, Anastasia Samoylova captures a tropical utopia on the brink of disaster. The photographer's series ‘Flood Zone’ provides an eerie glimpse into the future of America's sinking southern states. 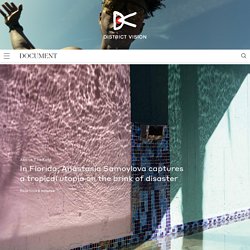 Madame de Pompadour’s foreboding epigram, “Après nous, le déluge” (“After us, the flood”), has become eerily sinister in light of climate change. The excesses of Western modernism rival that of the court of Louis XIV—only this time the vast accumulation of wealth and wastefulness are rapidly decimating not just the peasantry but the planet and the very life it supports.

The United States may desperately need a wall—but the last place it should be located is inland, along the desert keeping asylum seekers out. In a June 2019 report, the Center for Climate Integrity predicted the nation needs to build seawalls along 50,000 coastal miles across 22 states by the year 2040 to stave off the impact of rising sea levels. Estimated to cost $400 billion in total, Florida, the most at-risk state, faces costs of $76 billion alone. Meghan Markle's Vogue Issue Shows the Limits of Radical Royalty. For the cover, she chose 15 women—mostly models and actors, but also the author Chimamanda Ngozi Adichie and New Zealand’s prime minister, Jacinda Ardern—instead of posing herself. 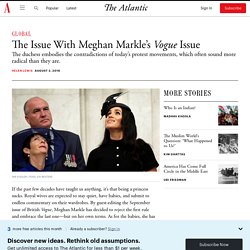 “The line-up is evidence that, in 2019, a new metric for global success is in play,” reads the un-bylined piece accompanying the shoot. “First, attract visibility. Then, convert visibility into a platform. Finally, use your platform to effect change.” America’s Dangerous Iran Obsession by Jeffrey D. Sachs. The US, seemingly with no awareness of its recent history with Iran, and led by an emotionally unbalanced president who believes he may commit murder and get away with it, is still acting out a 40-year-old psychological trauma. 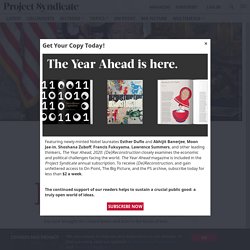 As usual, it's others who are most at risk. NEW YORK – US President Donald Trump’s order to assassinate Iran’s General Qassem Suleimani while on an official mission to Iraq was widely hailed in Trump’s jingoistic Republican Party. Government-sanctioned murders of foreign officials, clerics, and journalists are commonplace nowadays. Yet there is something special about America’s bloodlust against Iran. It is a 40-year-old obsession that has now brought the United States and Iran to the brink of war. The US fixation on Iran dates back to the Islamic Revolution in 1979, when Iranian students took over the US embassy in Tehran and held 52 Americans hostage for more than a year.

Telfar & Gap Announce 2020 Fashion Collaboration. ThredUp's new tool calculates the carbon footprint of your closet. Vogue Italia’s photo-free issue is greenwashing at its finest. Virgil Abloh: Streetwear? It’s definitely gonna die. Deep fakes, influencers, viral fashion – we live in a world unrecognisable from the one we stood in ten years ago. As a chaotic decade comes to a close, we're speaking to the people who helped shape the last ten years and analysing the cultural shifts that have defined them. Explore the decade on our interactive timeline here, or head here to check out all our features. The Story Behind Kanye West’s Breakout Street Style Moment at Paris Fashion Week.

The IG account curating sustainable fashion you actually want to wear. Loewe SS20 Collection: Detailed Look & Where to Buy. Akon City Is Officially Happening & It Has Its Own Currency. Facing up to Fashion's Sustainability Crisis with Future Dust. With a hellish heatwave hitting Europe this summer, it’s getting harder for developed countries to ignore the Earth’s changing climate. And as an industry that produces so much waste, fashion has its own ongoing role in harming the environment. Loewe SS20 Collection: Detailed Look & Where to Buy. Manual for Freedom, Research & Creativity. Streetwear's Sustainability Problem No One Wants to Talk About.