Mixing road groupsets: what works together and what doesn’t. With three major groupset manufacturers, a range of transmissions (seven- to 11-speed), and an excess of aftermarket components on the market, it is inevitable that consumers will have to grapple with a variety of incompatibilities when replacing or upgrading worn parts. 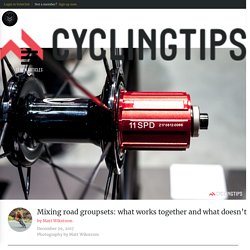 That’s because there is generally very little interchangeability between groupset components, but there are some exceptions. In this post — an updated version of an article that we first published in 2014 — Australian tech editor Matt Wikstrom takes a look at the known incompatibilities for 10- and 11-speed road groupsets and highlights those instances where it is possible to mix parts from different brands. Printlog2. Timberline Trail (Nannup): Top Tips Before You Go. Entretoise Hope 7 vitesses. Why you shouldn't exercise to lose weight, explained with 60+ studies. 1) An evolutionary clue to how our bodies burn calories When anthropologist Herman Pontzer set off from Hunter College in New York to Tanzania to study one of the few remaining hunter-gatherer tribes on the planet, he expected to find a group of calorie burning machines. 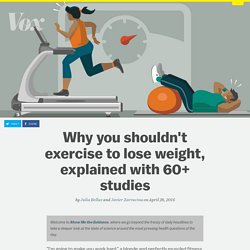 Unlike Westerners, who increasingly spend their waking hours glued to chairs, the Hadza are on the move most of the time. Men typically go off and hunt — chasing and killing animals, climbing trees in search of wild honey. Women forage for plants, dig up tubers, and comb bushes for berries. "They're on the high end of physical activity for any population that's been looked at ever," Pontzer said.

By studying the Hadza's lifestyle, Pontzer thought he would find evidence to back the conventional wisdom about why obesity has become such a big problem worldwide. In the dry, open terrain, they found study subjects among several Hadza families. When they crunched the numbers, the results were astonishing. 5 exercises to roll out tight muscles. The foam roller is an excellent tool for cyclists, according to Lorna Chapman of fitness studio Luna Yoga & Health - but you need to persevere and learn to love it! 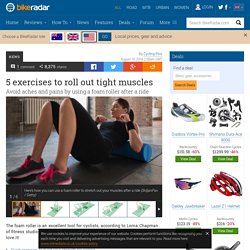 You can pick up a foam roller for a modest outlay at most good sports shops. Once you've done so, try the following exercises to improve your flexibility and help your muscles recover after a long ride. 12 Struggles Of Having An Outgoing Personality But An Anxious Mind. Outgoing people with anxious minds – or minds that overthink – tend to feel anxiety the most intensely, often because we don’t talk about it. 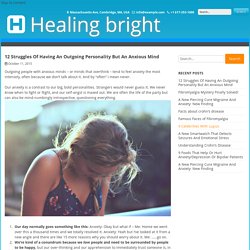 And by “often” I mean never. Our anxiety is a contrast to our big, bold personalities. Strangers would never guess it. We never know when to fight or flight, and our self-angst is maxed out. We are often the life of the party but can also be mind-numbingly introspective, questioning everything. Our day normally goes something like this: Anxiety: Okay but what if – Me: Homie we went over this a thousand times and we totally resolved it. That might mean we’ll have lots of friends or acquaintances but veryfew close friends who we share our world with. Learn how to wheelie, with Anna Glowinski. There’s a sound practical reason why you’d want to learn how to wheelie: it helps you manoeuvre the bike up and over obstacles. 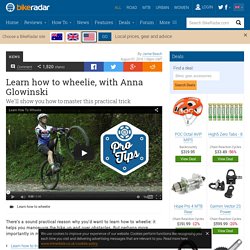 But perhaps more importantly in many people's eyes, it's old-school cool. In this video, Anna Glowinski talks you through the basics, from getting into the right starting position and correct gear, then leaning back to find the right balance point, and keeping the bike rolling smoothly with judicious dabs of pedals and rear brake. From there it's practise, practise and more practise – before you know it you'll be riding everywhere on one wheel. Maybe. Step 1: Get into a low gear It’s also helpful to find a bit of an upslope, because that will help with popping up the front wheel.

Select the little ring at the front, and a gear three or four down from easiest at the back. Step 2: Place your strongest foot near the top of the pedal turn You might be thinking that this is the point where you “heave” up the front wheel with your arms. Total Body Kettlebell Routine. Low back pain isn’t for Christmas, let alone life. Many riders are troubled by low back pain, and it seems common that it has become an accepted 'just part of being a cyclist'. 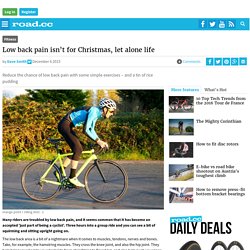 Three hours into a group ride and you can see a bit of squirming and sitting upright going on. The low back area is a bit of a nightmare when it comes to muscles, tendons, nerves and bones. Take, for example, the hamstring muscles. They cross the knee joint, and also the hip joint. They help bring your heel to your backside from straight leg to flexed leg, and also help push your knee from raised to straight. As a crazy little way to illustrate how connections between muscle, nerve and tendon can be beyond what we think is rational, try this little exercise. Take your shoes off, stand up and touch your toes. Now try to touch your toes again – see how much further you can reach?