Edible Flowers Chart, Whats Cooking America. Edible flowers are the new rage in haute cuisine After falling out of favor for many years, cooking and garnishing with flowers is back in vogue once again. 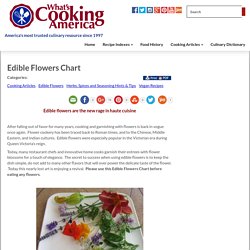 Flower cookery has been traced back to Roman times, and to the Chinese, Middle Eastern, and Indian cultures. Edible flowers were especially popular in the Victorian era during Queen Victoria’s reign. Today, many restaurant chefs and innovative home cooks garnish their entrees with flower blossoms for a touch of elegance. The secret to success when using edible flowers is to keep the dish simple, do not add to many other flavors that will over power the delicate taste of the flower. Edible Flowers. 42 Flowers You Can Eat. George M. 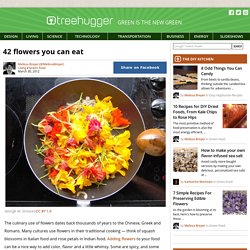 Groutas/CC BY 1.0 The culinary use of flowers dates back thousands of years to the Chinese, Greek and Romans. Many cultures use flowers in their traditional cooking — think of squash blossoms in Italian food and rose petals in Indian food. Tropaeolum - Wikipedia. The genus Tropaeolum, native to South and Central America, includes several very popular garden plants, the most commonly grown being T. majus, T. peregrinum and T. speciosum. 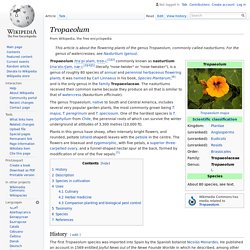 One of the hardiest species is T. polyphyllum from Chile, the perennial roots of which can survive the winter underground at altitudes of 3,300 metres (10,000 ft). History[edit] The first Tropaeolum species was imported into Spain by the Spanish botanist Nicolás Monardes. He published an account in 1569 entitled Joyful News out of the Newe Founde Worlde in which he described, among other things, the plants and animals discovered in South America.[8] The English herbalist John Gerard reports having received seeds of the plant from Europe in his 1597 book Herball, or Generall Historie of Plantes.[9] Tropaeolum majus was named by the Swedish botanist Carl Linnaeus, who chose the genus name because the plant reminded him of an ancient custom. Description[edit] Species in cultivation[edit] 15 Lesser-Known Berries You Should Try. Do you know your cloudberries from your dewberries? 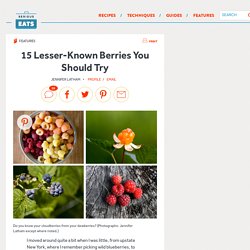 [Photographs: Jennifer Latham except where noted.] I moved around quite a bit when I was little, from upstate New York, where I remember picking wild blueberries, to Germany, where we gathered gooseberries, to the central coast of California, where blackberry vines grow in the mountains and suburban lots and our neighbors took great pride in their olallieberry jams and pies. For every spot on earth, it seems, there's a berry to be picked.

Jerusalem artichoke - Wikipedia. The Jerusalem artichoke (Helianthus tuberosus), also called sunroot, sunchoke, earth apple, or topinambour, is a species of sunflower native to eastern North America, and found from eastern Canada and Maine west to North Dakota, and south to northern Florida and Texas.[2] It is also cultivated widely across the temperate zone for its tuber, which is used as a root vegetable.[3] Description[edit] Helianthus tuberosus is a herbaceous perennial plant growing to 1.5–3 m (4 ft 11 in–9 ft 10 in) tall with opposite leaves on the upper part of the stem but alternate below.[4] The leaves have a rough, hairy texture. 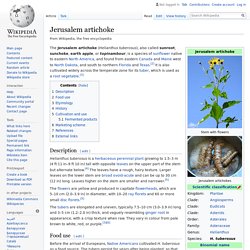 Larger leaves on the lower stem are broad ovoid-acute and can be up to 30 cm (12 in) long. Leaves higher on the stem are smaller and narrower.[5] Herb Drying Rack for Preserving Herbs. 4 Berry-Producing Shrubs that Fertilize, Too! Puntarelle - Wikipedia. Puntarelle sold in the market of Torino, Italy. 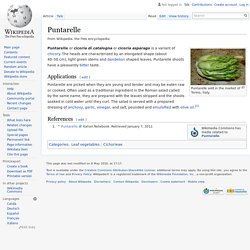 Applications[edit] Puntarelle are picked when they are young and tender and may be eaten raw or cooked. Often used as a traditional ingredient in the Roman salad called by the same name, they are prepared with the leaves stripped and the shoots soaked in cold water until they curl. The salad is served with a prepared dressing of anchovy, garlic, vinegar, and salt, pounded and emulsified with olive oil.[1] References[edit] Simple Steps to Grow a Hundred Pounds of Potatoes in a Barrel & steps gardening - tips. Amazing instructions that will help you to grow 100 pounds of healthy potatoes in controlled environment – in a barrel. 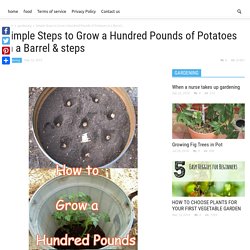 Just follow four easy steps and you will learn how to grow potatoes in a barrel. How to Harvest Basil to Keep it Producing All Season Long. Basil is one of those wonderful garden plants that just keeps coming. 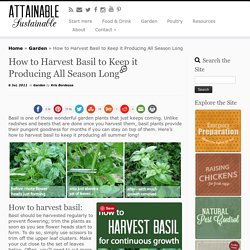 How To Grow Your Natural Sponge and Eat It too. One Man’s Genius Idea To Grow Tomatoes. A quick note from our founder- Over the past year, my friend Dave at PaleoHacks has been working on a secret cookbook with world-renowned Le Cordon Bleu chef Peter Servold. 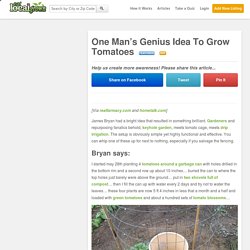 Well, today this new this new incredible Paleo Cookbook is finally available to be shipped right to your door for FREE That's right -- as a special launch promotion, we're offering our brand new Paleo fat loss cookbook to you for free (Chef Pete lost 60 lbs using these recipes!) -- All you have to do is just cover a small shipping cost (international shipping is a bit more). Vegetable Garden Planner Design Your Best Garden Ever. Growing a great vegetable garden involves juggling the needs of dozens of different crops. 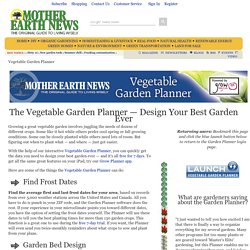 Some like it hot while others prefer cool spring or fall growing conditions. Some can be closely planted while others need lots of room. But figuring out when to plant what — and where — just got easier. With the help of our interactive Vegetable Garden Planner, you can quickly get the data you need to design your best garden ever — and it's all free for 7 days. To get all the same great features on your iPad, try our Grow Planner app. Currants and gooseberries in the home garden. Extension > Garden > Yard and Garden > Fruit > Currants and gooseberries in the home garden Emily S.

Tepe and Dr. Emily E. Raspberries: How to Plant, Grow and Harvest Raspberries. How to Harvest Chives All Year Round. Currant Plants from Stark Bro's - Currant Plants For Sale. Aromatic Adventures Growing Exotic Herbs and Spices Hydroponically - Maximum Yield Modern Growing Magazine. Many people value the distinctive flavors that herbs and spices from faraway places add to a dish and the good news is many of these tropical and subtropical plants thrive in hydroponic systems. Dr.