The Psychedelic Origins of Yoga. By Derek Beres The word "soma" is not new. 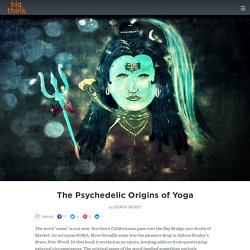 Northern Californians pass over the Bay Bridge into South of Market, its acronym SOMA. More broadly soma was the pleasure drug in Aldous Huxley’s Brave New World. In that book it worked as an opiate, keeping addicts from questioning external circumstances. The original usage of the word implied something entirely different. Huxley, a devoted student of Eastern philosophies, knew that. We have drunk Soma and become immortal; we have attained the light, the Gods discovered. Soma is the god Indra’s beverage — poets requesting that the drink bless them with divine favor. This theory was proposed by author and amateur mycologist Robert Gordon Wasson in 1968. 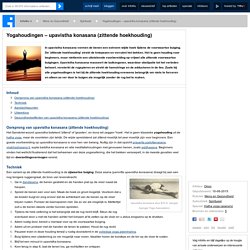 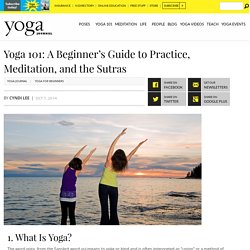 What Is Yoga? The word yoga, from the Sanskrit word yuj means to yoke or bind and is often interpreted as “union” or a method of discipline. A male who practices yoga is called a yogi, a female practitioner, a yogini. The Indian sage Patanjali is believed to have collated the practice of yoga into the Yoga Sutra an estimated 2,000 years ago. The Sutra is a collection of 195 statements that serves as a philosophical guidebook for most of the yoga that is practiced today. Today most people practicing yoga are engaged in the third limb, asana, which is a program of physical postures designed to purify the body and provide the physical strength and stamina required for long periods of meditation.

Yoga For "Tech Neck": Relieve Pain From Smartphone and Laptop Use - Yogiluscious. The Only 30 Yoga Poses You Really Need to Know. Although it's an ancient practice, yoga has become the exercise du jour in recent years. 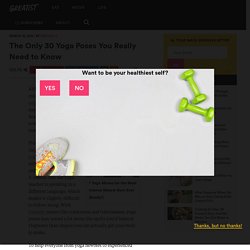 Everyone from A-list celebs to your co-workers are getting their om on these days—and for good reason. Practicing yoga has serious health benefits, from boosting your immunity​, helping you sleep better, fighting stress, and even improving your sex life . 6 yogaposes die depressie en angst verminderen. Practice These Yoga Moves at Your Standing Desk. Meditation.. Chakra's.. Kundalini.. Yoga.. 12 Yoga Moves to Overcome Anxiety. The lazy days of summer are drawing to a close, and as things start amping back up at work and school, it’s easy to get a little bit overwhelmed and very stressed out. 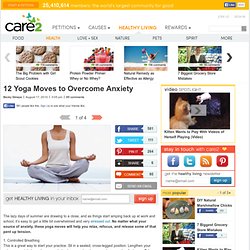 No matter what your source of anxiety, these yoga moves will help you relax, refocus, and release some of that pent up tension. Yoga Twists for Energy. The Practice: This standing twist sequence will open your upper back, leaving you refreshed and energized. 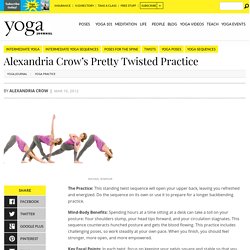 Do the sequence on its own or use it to prepare for a longer backbending practice. Mind-Body Benefits: Spending hours at a time sitting at a desk can take a toll on your posture: Your shoulders slump, your head tips forward, and your circulation stagnates. This sequence counteracts hunched posture and gets the blood flowing. This practice includes challenging poses, so work steadily at your own pace. When you finish, you should feel stronger, more open, and more empowered. Key Focal Points: In each twist, focus on keeping your pelvis square and stable so that you create the twist from your mid and upper back. Watch: A video of this Home Practice sequence here. Charge Up: Open Your Spine Start seated, crossing your shins in Sukhasana (Easy Pose). 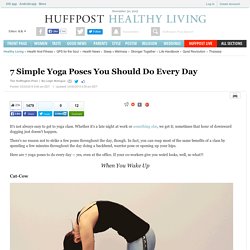 Whether it's a late night at work or something else, we get it; sometimes that hour of downward dogging just doesn't happen. There's no reason not to strike a few poses throughout the day, though. In fact, you can reap most of the same benefits of a class by spending a few minutes throughout the day doing a backbend, warrior pose or opening up your hips. Here are 7 yoga poses to do every day -- yes, even at the office. If your co-workers give you weird looks, well, so what?! When You Wake Up Cat-Cow (Damon Dahlen/Huffington Post) Cat-cow is the perfect way to wake up the entire spine after it's been resting for a solid seven to eight hours (we hope). Downward Dog Downward dog stretches out the back, legs and arms.

Mid-Morning Standing Forward Fold. Yoga Breathing Exercises - Pranayama. Yoga breathing exercises, which are called pranayama in Sanskrit, may be done in association with yoga poses or just while sitting quietly. 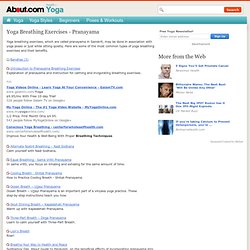 Here are some of the most common types of yoga breathing exercises and their benefits. Introduction to Pranayama Breathing ExercisesExplanation of pranayama and instruction for calming and invigorating breathing exercises. Alternate Nostril Breathing – Nadi SodhanaCalm yourself with Nadi Sodhana. Equal Breathing - Sama Vritti PranayamaIn sama vritti, you focus on inhaling and exhaling for the same amount of time. Cooling Breath - Shitali PranayamaHow to Practice Cooling Breath - Shitali Pranayama. Yoga For Beginners. Yoga oefeningen voor beginners. FingerYoga.com — FingerYoga will be back up shortly. Kundalini.