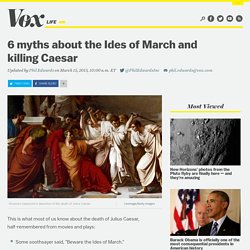 " A few idealistic Romans decided to win back Rome for the people.Caesar got stabbed by Brutus with a big sword, said "Et tu, Brute? " and died nobly. How history forgot its role in public debate – David Armitage. It has long been fashionable to say that the globe is shrinking. 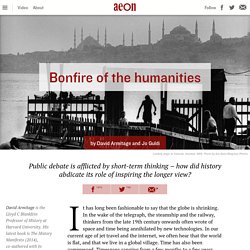 In the wake of the telegraph, the steamship and the railway, thinkers from the late 19th century onwards often wrote of space and time being annihilated by new technologies. In our current age of jet travel and the internet, we often hear that the world is flat, and that we live in a global village. Time has also been compressed. 'Helen of Troy: Beauty, Myth, Devastation' by Ruby Blondell, Reviewed. Émile Zola’s gripping novel Nana (1880) evokes the rise, fall, and early death of a sexy blonde teenager, a celebrity actress and prostitute, who takes all of Paris by storm. 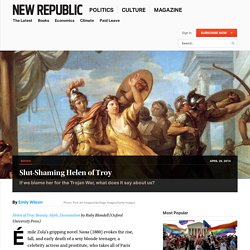 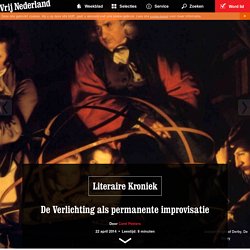 Health Gods-given hallucinations and suppressing anger for the greater good: How what's considered "abnormal" has changed. 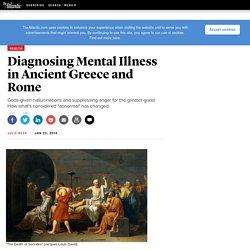 Please consider disabling it for our site, or supporting our work in one of these ways Subscribe Now > We can put a man on the moon a rover on Mars but we’re still figuring out our own brains. Mental illness is stigmatized, potentially overdiagnosed, and often misunderstood. William V. De ironie van de revolutie. Diagnosing Mental Illness in Ancient Greece and Rome. Germans see the best of their soul in Weimar. Everyone else, on the other hand... Thuringia, a region of former East Germany, occupies a special place in the thoughts of Germans, who like to regard it as the origin of all their best virtues. 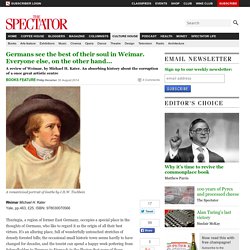 It’s an alluring place, full of wonderfully untouched stretches of densely forested hills; the occasional small historic town seems hardly to have changed for decades, and the tourist can spend a happy week pottering from Schmalkalden to Ilmenau to Eisenach in the illusion that none of those unpleasant realities of the last century ever touched this place. I once asked the guide at the Wartburg, the magnificent medieval and mock-medieval castle on a snowy crop outside Eisenach, what this place meant to modern-day Germans. It was the castle where Luther holed up to translate the Bible, where the first idealistic students swore oaths to create a united Germany, and where Wagner set Tannhäuser. She had no doubt. ‘Tausend Jahre positive Deutsche Geschichte’: 1,000 years of positive German history. 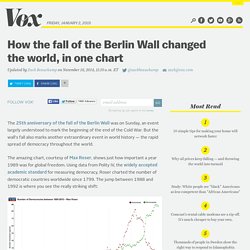 But the wall's fall also marks another extraordinary event in world history — the rapid spread of democracy throughout the world. The amazing chart, courtesy of Max Roser, shows just how important a year 1989 was for global freedom. Sex and the Industrial Revolution. 'The Reapers', a hand-coloured mezzotint of 1809. 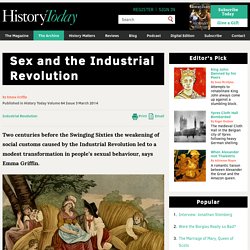 British MuseumSexual intercourse beganIn nineteen sixty-three (which was rather late for me) –Between the end of the Chatterley banAnd the Beatles’ first LP. Something of the sexual revolution of the 1960s is captured in Philip Larkin’s poem ‘Annus Mirabilis’ from his collection High Windows (1974). His pithy lament resonates because it captures an elemental truth. Stories From the Berlin Wall: 25 Years Later. Wikimedia In December 1963, The Atlantic Monthly published a 43-page supplement on Berlin, "the Broken City. 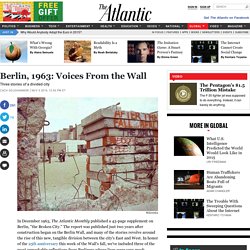 " The report was published just two years after construction began on the Berlin Wall, and many of the stories revolve around the rise of this new, tangible division between the city's East and West. In honor of the 25th anniversary this week of the Wall's fall, we've included three of the most remarkable reflections from Berliners whose lives were very much defined by one of history's most consequential barriers. The 10 greatest changes of the past 1,000 years. 11th century: Castles Most people think of castles as representative of conflict. 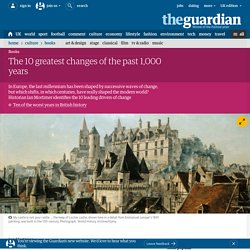 However, they should be seen as bastions of peace as much as war. In 1000 there were very few castles in Europe – and none in England. This absence of local defences meant that lands were relatively easy to conquer – William the Conqueror’s invasion of England was greatly assisted by the lack of castles here. The Berlin Wall’s great human experiment.

The Walls of Berlin: A Reading List. The Berlin Wall still exerts incredible power over our imaginations, 25 years after Germans on both sides of the city began the process of demolishing it. Its existence had always invited wildly divergent reactions, making it not only a physical structure, but also a canvas on which political and cultural dreams could be projected. This is as true today, for a generation that has never lived in its shadow, as it was during the Cold War. Here are four stories that attempt to trace its legacy. 1. Welcome to Weimar. Welcome to Weimar by Lisa Lieberman. Ancient Society Research Resources.