"Minimalism is not about having as little as possible for the sake of it, but excusing yourself from the never-ending spiral of overspending, debts." Brianna Wiest

“The life of sensation is the life of greed; it requires more and more.

The life of the spirit requires less and less; time is ample and its passage sweet.” Annie Dillard. You Can Probably Get Rid Of 70% Of Your Belongings - Brianna Wiest - Medium. Living the Simple Life. ‘A man is rich in proportion to the number of things which he can afford to let alone.’ 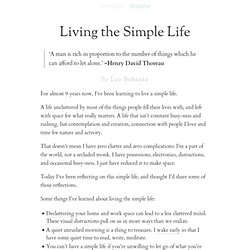 ~Henry David Thoreau By Leo Babauta For almost 9 years now, I’ve been learning to live a simple life. A life uncluttered by most of the things people fill their lives with, and left with space for what really matters. A life that isn’t constant busy-ness and rushing, but contemplation and creation, connection with people I love and time for nature and activity. Rules for Getting Organized & Decluttered. By Leo Babauta What would it take to get your life decluttered and organized? That might be a tall order for many of us, but the truth is, we could do it in bursts and spurts, using a handful of easy-to-follow rules. The other day I wrote about the idea of setting rules instead of goals … today I want to share a few ideas for rules to help you get decluttered and organized.

I know in my life, going from being overwhelmed with clutter to minimalism was a slow but rewarding journey, and now I feel happy every time I look around and see the lovely space around me. If you’re feeling overwhelmed, I’m here to testify that it’s not impossible, and it just takes some small steps that add up over time. Here are the rules I suggest — though I don’t suggest adopting them all, and especially not all at once. Get yourself organized at the start and end of a day. Of course, these are just suggested rules … you should modify them to suit your life. How to Implement the Rules. Why Minimalism is a Better Way of Life. Being a minimalist means that you value yourself more than material things. 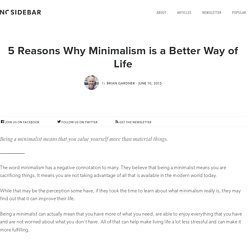 The word minimalism has a negative connotation to many. They believe that being a minimalist means you are sacrificing things. It means you are not taking advantage of all that is available in the modern world today. While that may be the perception some have, if they took the time to learn about what minimalism really is, they may find out that it can improve their life. Being a minimalist can actually mean that you have more of what you need, are able to enjoy everything that you have and are not worried about what you don’t have.

“The great thing about minimalism is that it is a choice.”Click to Tweet What is Minimalism? The image some people have of a minimalist lifestyle is giving up all of the modern conveniences of the world. There may be some people that are living like this, but not everyone who is embracing minimalism has to take it this far. 5 Ways Minimalism Helps You On The Path To Productivity. Today’s guest post is by Dan Erickson. 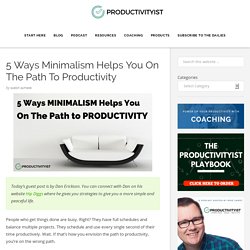 You can connect with Dan on his website Hip Diggs where he gives you strategies to give you a more simple and peaceful life. People who get things done are busy. Right? They have full schedules and balance multiple projects. They schedule and use every single second of their time productively. If you spend all your time being productive, you’ll likely fail in the end. Here are five ways minimalism makes you more productive. 1. You might envision the most productive people in the world in messy offices. 2. When you choose to live simply, the path to productivity is an automatic benefit.

Decluttering. Essentialism. Best Possible Future. 15 Minimalist Hacks To Maximize Your Life. Choosing Better Work Over More Tools. I Removed Every Inessential Thing From My Website and This Happened. When I built my first website a little over 3 years ago, I had no idea what I was doing. 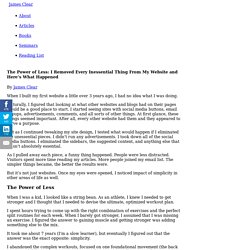 Naturally, I figured that looking at what other websites and blogs had on their pages would be a good place to start. I started seeing sites with social media buttons, email popups, advertisements, comments, and all sorts of other things. At first glance, these things seemed important. After all, every other website had them and they appeared to serve a purpose.

But as I continued tweaking my site design, I tested what would happen if I eliminated the unessential pieces. As I pulled away each piece, a funny thing happened. But it’s not just websites. The Power of Less When I was a kid, I looked like a string bean. I spent hours trying to come up with the right combination of exercises and the perfect split routines for each week. It took me about 7 years (I’m a slow learner), but eventually I figured out that the answer was the exact opposite: simplicity. Eliminate Your Distractions. Becoming Minimalist.