How one Maryland library system is embracing virtual reality - Technical.ly Baltimore. Libraries are increasingly embracing technology as they look toward the future, but it’s not just about replacing stacks of books with tablets. 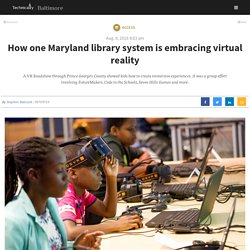 Being natural gathering points and focused on learning, FutureMakers has found libraries to be one home for its growing maker education programs (the group is also seeking new coaches). “Libraries are really great at being a place where you’re going to try new things,” said FutureMakers founder Matt Barinholtz. In Prince George’s County this summer, that involved the latest technology. Walking into the Hyattsville Public Library on June 26, hundreds of afternoon patrons had noses pressed firmly in VR goggles, rather than books. It was a stop on the VR Roadshow through PG County. “Just like smartphones changed everything, they’re wondering how VR is going to change how they live their life,” Diaz said.

At three other events, kids got the chance to try building an Enchanted Forest experience with Unity. Pulling it off took lots of collaboration. Virtual reality: low-cost tools and resources for the classroomsearch.proquest. Evolving the Library: VR & Community Education. The complete guide to virtual reality – everything you need to get started. Until recently, virtual reality had been something of a fantasy for storytellers and technologists. 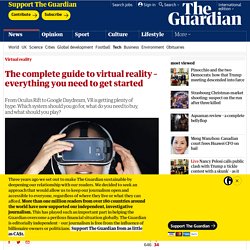 As long ago as 1935, American science fiction writer Stanley G Weinbaum described something like virtual reality in a short story called Pygmalion’s Spectacles. “But listen – a movie that gives one sight and sound. Suppose now I add taste, smell, even touch, if your interest is taken by the story. Suppose I make it so that you are in the story, you speak to the shadows, and the shadows reply, and instead of being on a screen, the story is all about you, and you are in it. Would that be to make real a dream?” Technologists might still be working on smell and taste, but Albert Ludwig’s “magic spectacles” eerily foreshadow the current prominence for headsets and 360-degree games, videos and virtual worlds. The current age of virtual reality began in 2010, when American teenager Palmer Luckey created the first prototype of a VR headset that would evolve into the Oculus Rift. The basics HTC Vive. Google Cardboard – Google VR.

A literature review on immersive virtual reality in education: state of the art and perspectives. Virtual Reality for Training and Lifelong Learning. Abstract This article covers the application of virtual reality (VR) to training and lifelong learning. 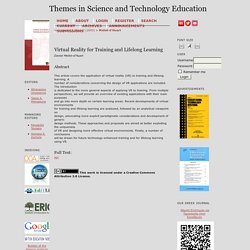 Anumber of considerations concerning the design of VR applications are included. The introductionis dedicated to the more general aspects of applying VR to training. From multipleperspectives, we will provide an overview of existing applications with their main purposesand go into more depth on certain learning areas. Recent developments of virtual environmentsfor training and lifelong learning are analyzed, followed by an analytical viewpoint ondesign, advocating more explicit paradigmatic considerations and development of genericdesign methods. This work is licensed under a Creative Commons Attribution 3.0 License. Virtual reality may create novel IP issues in the real world. Designing for virtual reality and the impact on education. Virtual reality trial sends Adelaide library visitors to the Moon and back. Posted Virtual reality headsets will be a big ticket item on many people's Christmas wishlists this year, but one local library will let you try them for free. 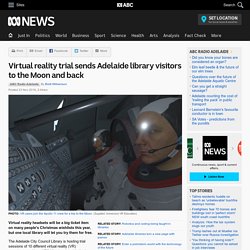 The Adelaide City Council Library is hosting trial sessions of 10 different virtual reality (VR) experiences with an HTC Vive headset this festive season. The library wants to see whether VR can act as a catalyst to encourage education and research. Library patron Ellen Beasy had never experienced VR before; she said the Apollo 11 experience was breathtaking. "I thought it was amazing — it was much more realistic than I expected. " She said she loved the way history was integrated in an entertaining way. "There was a quote in there from Galileo that I had not read before and it was really amazing to put that together with the music and what you were experiencing.

"It made the history come alive in a whole new way. "I can see that you could spend hours [using VR]. "It's an amazing learning tool because it is so immersive," she said.