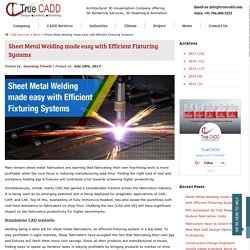 Finding the right kind of tool and workpiece holding jigs & fixtures will contribute a lot towards achieving higher productivity. Simultaneously, virtual reality [VR] has gained a considerable traction across the fabrication industry. It is being seen as an emerging potential and is being deployed for pragmatic applications of CAD, CAM, and CAE. Top of this, availability of fully immersive headset, has also eased the workflows with real-time assistance to fabricators on shop floor. Clubbing the two [CAD and VR] will have significant impact on the fabrication productivity for higher benchmarks. How 3D CAD for sheet metal design unfolds better productivity - Metal Working World Magazine.

In a digital era, leading manufacturers are eying to automate factories, capitalize on big data, drive predictive maintenance and collaborate efficiently with suppliers and partners on part designs with 3D tools. 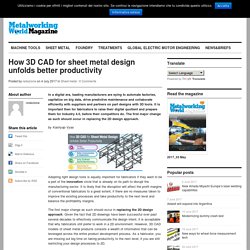 It is important then for fabricators to raise their digital quotient and prepare them for Industry 4.0, before their competitors do. The first major change as such should occur in replacing the 2D design approach. CAD with BIM Raises the Bar of Quality Ductwork Fabrication. Posted byJaydeep Chauhan on September 22nd, 2017 “If you’ve ever designed a ductwork routing in SolidWorks, you’d know that when you add a route and connect it to the end point of the route, you’ll encounter a twist. 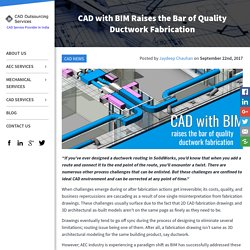 There are numerous other process challenges that can be enlisted. But these challenges are confined to ideal CAD environment and can be corrected at any point of time.” When challenges emerge during or after fabrication actions get irreversible; its costs, quality, and business repercussions are cascading as a result of one single misinterpretation from fabrication drawings.

These challenges usually surface due to the fact that 2D CAD fabrication drawings and 3D architectural as-built models aren’t on the same page as finely as they need to be. Drawings eventually tend to go off sync during the process of designing to eliminate several limitations; routing issue being one of them. Online exclusive: Product configurator saves Australian pressure vessel fabricators from last minute hassle. After Cyclone Debbie wrecked all the major ports and mines in Queensland, Australia, volumes of coal exports have hit rock bottom. 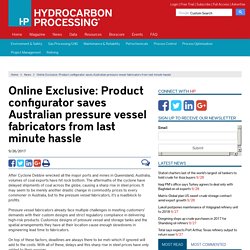 The aftermaths of the cyclone have delayed shipments of coal across the globe, causing a sharp rise in steel prices. It may seem to be merely another drastic change in commodity prices to every commoner in Australia, but to the pressure vessel fabricators, it’s a roadblock to profits. Pressure vessel fabricators already face multiple challenges in meeting customers’ demands with their custom designs and strict regulatory compliance in delivering high-risk products. Furniture Design Automation: Minimalist Efforts; Unrestrained Profits – DriveWorks: CAD Design Automation & Customization. Fancy and durable furniture designing is a need of furniture industry. 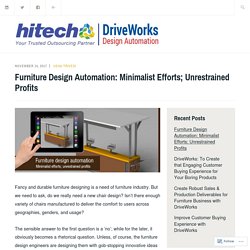 But we need to ask, do we really need a new chair design? Isn’t there enough variety of chairs manufactured to deliver the comfort to users across geographies, genders, and usage? The sensible answer to the first question is a ‘no’; while for the later, it obviously becomes a rhetorical question. Unless, of course, the furniture design engineers are designing them with gob-stopping innovative ideas that maintain the efficiency of post designing stages. One reason of remaining efficient is of course recession; but more than that there is an ‘urgency’ factor for every bespoke job.

Should fabricators continue the legacy of using DWG file format? 2D drawings and 3D models generated in CAD software predominant in fabrication industry, and if any fabricator were to dedicate their success, they would happily pin it on CAD. 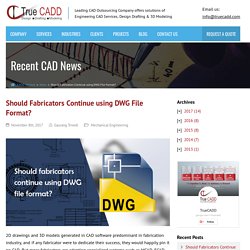 But more fabricators are adapting specialized systems such as MCAD, ECAD and others. There is a legacy in the industry of using DWG files ever since CAD has been introduced. 5 Stories to Help Your Sheet Metal Fabrication Business Transform to Digital. Product Development Posted by Kashyap Vyas on June 5th, 2017 Industry 4.0 is all about digitizing manufacturing operations, capitalizing on big data, automating factories and collaborating efficiently with suppliers through 3D design and visualization tools. 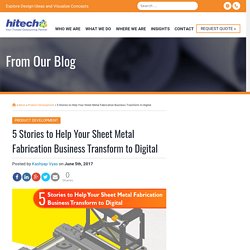 There are discussions growing all over about how technologies like Augmented Reality (AR) and Internet of Things (IoT) will take manufacturing sector further to the next level. But, when we look at the actual scenario, almost 90% of small fabrication units still rely on 2D processes. 3D CAD helps Metal Fabricators to Embrace the Digital Thread Opportunity. Science Published on May 28th, 2017 | by Guest The future of industry is digital. 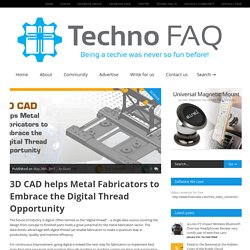 Often termed as the “digital thread” – a single data source covering the design from concept to finished parts holds a great potential for the metal fabrication sector. The data-driven advantage with digital thread can enable fabricators to make a quantum leap in productivity, quality and machine efficiency. Sheet Metal Design: 5 Tips to Choose the Right CAD Software. Sheet Metal Fabricators Should Change Their Imperative Tool. Posted by Jaydeep Chauhan on August 1st, 2017 If a metal fabrication shop doesn’t change and resists adoption of new technologies; it will soon get obsolete. 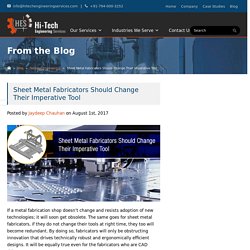 The same goes for sheet metal fabricators, if they do not change their tools at right time, they too will become redundant. By doing so, fabricators will only be obstructing innovation that drives technically robust and ergonomically efficient designs. Determining sheet metal design intent – Kickoff for efficient beginning. Product Development Posted by Kashyap Vyas on August 9th, 2017 My first question to my readers is, “How would you know that a particular 3D CAD model is to be treated as a sheet metal part?” 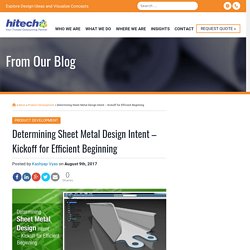 Well, from CAD software’s viewpoint, a sheet metal part has several limitations; and, these may vary with the software say, it might be different in SolidWorks than in Autodesk’s Inventor. A few of which will include uniform wall thickness of the part, some considerable and specific distance between two seams, non-permissible crossover bends etc.