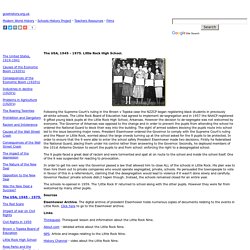 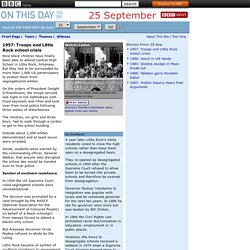 But they had to be surrounded by more than 1,000 US paratroopers to protect them from segregationist whites. Little Rock School 1957 MEDIUM. Three years after the U.S. 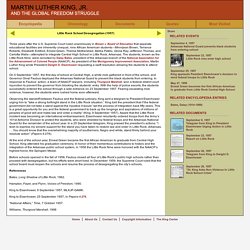 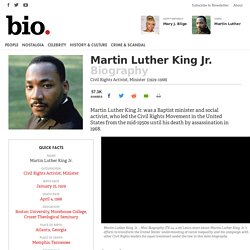 Synopsis Martin Luther King Jr. was born on January 15, 1929, in Atlanta, Georgia. Little Rock High School CHALLENGING. Central High In September of 1957, the country was changed forever by the “Crisis at Central High”—one of the first federally ordered integration acts. 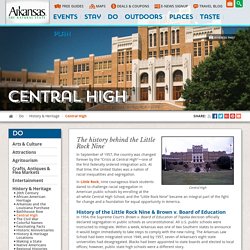 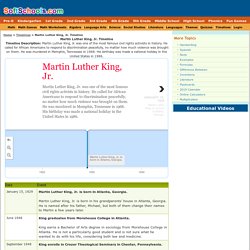 TimelineTimeline Description: Martin Luther King, Jr. was one of the most famous civil rights activists in history. He called for African Americans to respond to discrimination peacefully, no matter how much violence was brought on them. He was murdered in Memphis, Tennessee in 1968. His birthday was made a national holiday in the United States in 1986. Martin Luther King Jr. March on Washington for Jobs and Freedom. On 28 August 1963, more than 200,000 demonstrators took part in the March on Washington for Jobs and Freedom in the nation’s capital. 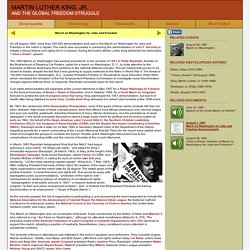 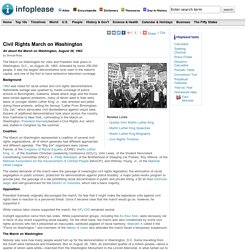 Attended by some 250,000 people, it was the largest demonstration ever seen in the nation's capital, and one of the first to have extensive television coverage. Background 1963 was noted for racial unrest and civil rights demonstrations. 9L homework - sit ins and freedom rides photographs. Civil Rights Road Map. 5.4 Birmingham Alabama outline. 5.4 March on Washington outline. The Birmingham Campaign - start here & watch video. In the spring of 1963, activists in Birmingham, Alabama launched one of the most influential campaigns of the Civil Rights Movement: Project C, better known as The Birmingham Campaign. 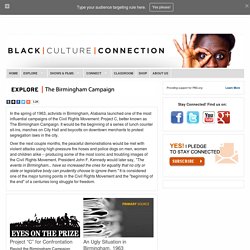 It would be the beginning of a series of lunch counter sit-ins, marches on City Hall and boycotts on downtown merchants to protest segregation laws in the city. Over the next couple months, the peaceful demonstrations would be met with violent attacks using high-pressure fire hoses and police dogs on men, women and children alike -- producing some of the most iconic and troubling images of the Civil Rights Movement. President John F. Kennedy would later say, "The events in Birmingham... have so increased the cries for equality that no city or state or legislative body can prudently choose to ignore them. " Fact sheet Birmingham, Alabama 1963. Birmingham campaign 1963. In April 1963 Martin Luther King went to Birmingham, Alabama, a city where public facilities were separated for blacks and whites. 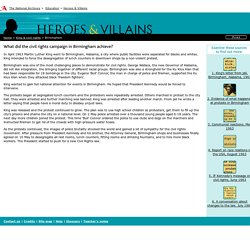 King intended to force the desegregation of lunch counters in downtown shops by a non-violent protest. Birmingham was one of the most challenging places to demonstrate for civil rights. George Wallace, the new Governor of Alabama, did not like integration, the bringing together of different racial groups. Birmingham was also a stronghold for the Ku Klux Klan that had been responsible for 18 bombings in the city.

Eugene ‘Bull’ Connor, the man in charge of police and firemen, supported the Ku Klux Klan when they attacked black ‘freedom fighters’. Birmingham 1963. In 1963, Birmingham became a focus for the civil rights movement. Birmingham, as a city, had made its mark on the civil rights movement for a number of years. Whether it was through the activities of Bull Connor or the bombed church which killed four school girls, many Americans would have known about Birmingham by 1963. Both SNCC and the NAACP were relatively inactive in Birmingham; so any civil rights campaign could be lead by SCLC without too much rivalry.

March on Washington - start here and watch video. As blacks faced continuing discrimination in the postwar years, the March on Washington group met annually to reiterate blacks’ demands for economic equality. The civil rights movement of the 1960s transformed the political climate, and in 1963, black leaders began to plan a new March on Washington, designed specifically to advocate passage of the Civil Rights Act then stalled in Congress. Chaired again by A. Philip Randolph and organized by his longtime associate, Bayard Rustin, this new March for Jobs and Freedom was expected to attract 100,000 participants. President John F. Factsheet the March on Washington.