100 years ago today, Canada's black battalion set sail for WWI and made histo... They faced racism and discrimination, and they had to fight a battle at home before they could represent Canada in the First World War. 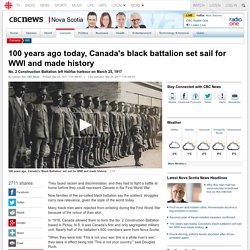 Now families of the so-called black battalion say the soldiers' struggles carry new relevance, given the state of the world today. Many black men were rejected from enlisting during the First World War because of the colour of their skin. In 1916, Canada allowed them to form the No. 2 Construction Battalion based in Pictou, N.S. History - World Wars: A White Man's War? World War One and the West Indies. Experiences of colonial troops. Dr Santanu Das gives an overview of the numbers and roles of colonial troops in World War One. 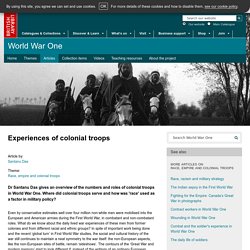 Where did colonial troops serve and how was 'race' used as a factor in military policy? Even by conservative estimates well over four million non-white men were mobilised into the European and American armies during the First World War, in combatant and non-combatant roles. BBC Schools - Empire nations. 10 January 2014Last updated at 21:17 Continue reading the main story Indian soldiers serving with the British Army at camp during World War One Indian soldiers serving with the British Army engage in a friendly boxing match, circa 1916 1914: The Canadian Volunteers, also known as The Moose Jaw Legion of Frontiersmen, joined as part of the Princess Patricia's Light Infantry. 24th August 1916: Soldiers in the Australian and New Zealand Army Corps with their one year old pet kangaroo 'Joey' October 1915: South African soldiers stationed at Bexhill with their baboon mascot. 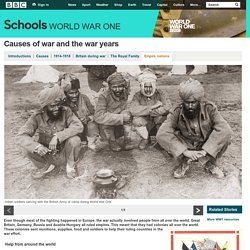 The call of the Empire, the call of the war. A wounded Indian soldier is taken to hospital These ‘‘colonials’’ had the status of kith and kin. 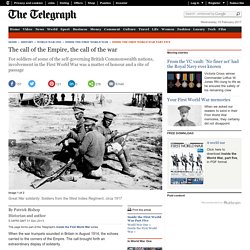 The inhabitants of India and elsewhere were ‘‘natives’’ who had no ties of blood and place with their rulers. The Empire’s demands were equally pressing, however. In the case of India, the locally raised army was a vital element in the imperial military structure. Exhibitions & Learning online. As most of Africa was under European control in 1914, the continent was quickly sucked into the First World War. 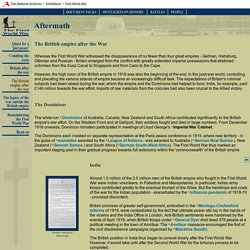 Fearful of the political implications of pitting black troops against white, Britain refused to deploy a large African army for service in Europe, though various groups such as the 20,000-strong South African Native Labour Contingent served as non-combatants behind the lines on the Western Front. African troops were used almost exclusively in the war in Africa.