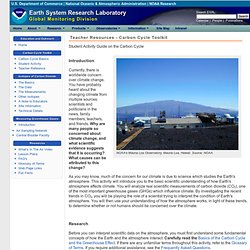 Source: NOAA Introduction Currently, there is worldwide concern over climate change. You have probably heard about the changing climate from multiple sources: scientists and politicians in the news, family members, teachers, and friends. As you may know, much of the concern for our climate is due to science which studies the Earth's atmosphere. Research Before you can interpret scientific data on the atmosphere, you must first understand some fundamental concepts of how the Earth and the atmosphere interact. Procedure This activity will require you to use several web tools to analyze CO2 concentrations from sites around the globe, measured by NOAA. Interactive Atmospheric Data Visualization The Interactive Atmospheric Data Visualization (IADV) website is a data exploration tool for the trace gases measured by NOAA. 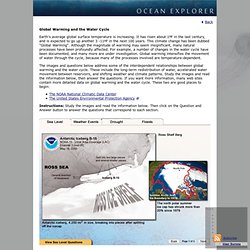 It has risen about 1ºF in the last century, and is expected to go up another 3 -11ºF in the next 100 years. This climate change has been dubbed "Global Warming". Although the magnitude of warming may seem insignificant, many natural processes have been profoundly affected. For example, a number of changes in the water cycle have been documented, and many more are under investigation. Article: Climate change speeding up water cycle. News in Science Friday, 27 April 2012 Anna SallehABC Ramping up The greenhouse effect is accelerating the global water cycle almost twice the rate predicted by climate change models, say researchers. 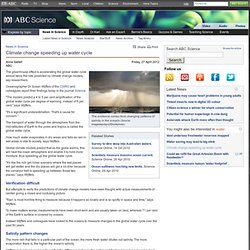 Oceanographer Dr Susan Wijffels of the CSIRO and colleagues report their findings today in the journal Science. "The models predict a 4 to 5 per cent amplification of the global water cycle per degree of warming, instead of 8 per cent," says Wijffels. "It's a significant underestimation. Article: Climate change is dominated by the water cycle, not carbon dioxide. CHICAGO, October 7, 2013 — Climate scientists are obsessed with carbon dioxide. 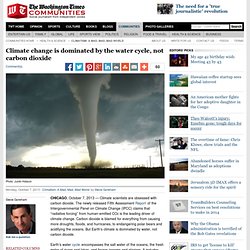 The newly released Fifth Assessment Report of the Intergovernmental Panel on Climate Change (IPCC) claims that “radiative forcing” from human-emitted CO2 is the leading driver of climate change. Carbon dioxide is blamed for everything from causing more droughts, floods, and hurricanes, to endangering polar bears and acidifying the oceans. But Earth’s climate is dominated by water, not carbon dioxide. Nitrogen Cycle Explanation in animation. Case Study: Fish as Fertilizers. Case Study: Fishing for Answers: Dead Zone in the Gulf of Mexico. Article: Saving the Seas: Reducing Fertilizer Runoff to Resurrect Ocean Dead Zones. Marine pollution takes many forms, from the millions of gallons of oil that run off our highways each year to the Great Pacific Garbage Patch, a massive gyre of floating plastic trash. 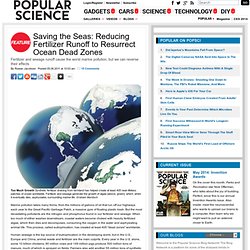 But the most devastating pollutants are the nitrogen and phosphorus found in our fertilizer and sewage. When too much of either washes downstream, coastal waters become choked with heavily fertilized algae, which then dies and decomposes, consuming the oxygen in the water and asphyxiating animal life. This process, called eutrophication, has created at least 405 "dead zones" worldwide. Human sewage is the top source of eutrophication in the developing world, but in the U.S., Europe and China, animal waste and fertilizer are the main culprits. Every year in the U.S. alone, some 10 billion chickens, 80 million cows and 149 million pigs produce 500 million tons of manure, much of which is sprayed on fields. Eutrophication is reversible. Similar results can be achieved without societal collapse.

Discarded plastic forms an ecosystem at sea. OFF THE COAST OF SAN DIEGO — Marine science graduate student Elizabeth Lopez maneuvered a huge steel claw over the side of a 134-foot sailboat. 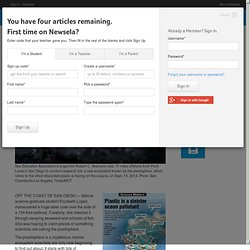 Carefully, she lowered it through swaying seaweed and schools of fish. She was hoping to catch pieces of something scientists are calling the plastisphere. The plastisphere is a mysterious marine ecosystem scientists are only now beginning to find out about. It starts with bits of broken-down plastic no bigger than grains of salt. Bacteria grow on those tiny pieces of debris. “We’ve created a new man-made ecosystem of plastic debris,” said Lopez, who is studying at the University of San Diego.

The plastisphere was six decades in the making. "Garbage Patches" In The Ocean When that debris washes into the ocean, it breaks down into bits that are then colonized by microscopic organisms. “This is an issue of great concern,” said marine geochemist Tracy Mincer. And, she said, we don't know what's happening as the plastic is being broken down.