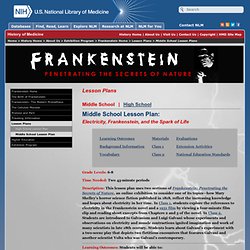 In Class 1, students explore the references to electricity in the Frankenstein novel and a 1931 film by viewing a four-minute film clip and reading short excerpts from Chapters 2 and 5 of the novel. Learning Outcomes: Students will be able to: Become aware that Mary Shelley wrote her horror science fiction, Frankenstein, and incorporated into her novel emerging scientific knowledge and hope for electricity in the late 18th century. Back to top Background Information: The Frankenstein: Penetrating the Secrets of Nature exhibition looks at the world from which Mary Shelley came. Ben Franklin - Electric Science Party. Benjamin Franklin and Lightning Rods. The Electric Franklin. Benjamin Franklin was the most famous American in his day. 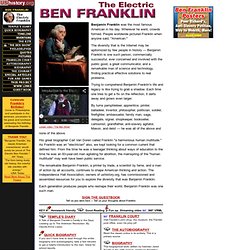 Wherever he went, crowds formed. People worldwide pictured Franklin when anyone said, "American. " The diversity that is the Internet may be epitomized by few people in history — Benjamin Franklin is one such person, commercially successful, ever concerned and involved with the public good, a great communicator, and a remarkable man of science and technology, finding practical effective solutions to real problems. Trying to comprehend Benjamin Franklin's life and legacy is like trying to grab a shadow.

Each time one tries to get a fix on the reflection, it darts away and grows even larger. Pieces of Science: The Lightning Rod. Point...of Invention What would you think if you saw a man chasing a thunder and lightning storm on horseback? 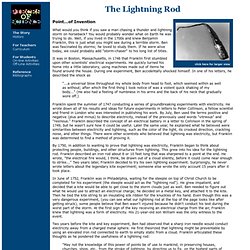 You would probably wonder what on Earth he was trying to do. Well, if you lived in the 1700s and knew Benjamin Franklin, this is just what you might see during a terrible storm. Ben was fascinated by storms; he loved to study them. If he were alive today, we could probably add "storm-chaser" to his long list of titles. Ben Had a Point, But George Was Right. Science Projects - Make Your Own Lightning. Building Academic Vocabulary - Investigating Electricity. Jodi Warner, Greenway High School, Coleraine, MN Summary In this activity students will first brainstorm all the terms (vocabulary) they can think of related to electricity. 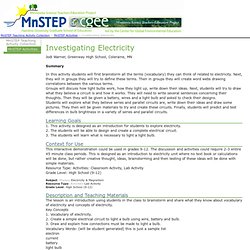 Next, they will in groups they will try to define these terms. Then in groups they will create word webs drawing correlations between the various terms. Groups will discuss how light bulbs work, how they light up, write down their ideas. Learning Goals. Electricity » Explore More: The Future of Energy. Electricity is a broad term used to describe the behavior of electrons and protons. 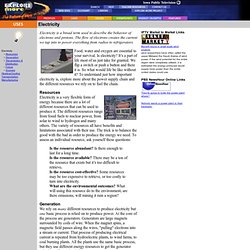 The flow of electrons creates the current we tap into to power everything from radios to refrigerators. Electrical Generation » Explore More: The Future of Energy. Electricity is the controlled movement of electrons inside a conductor (like a copper wire). 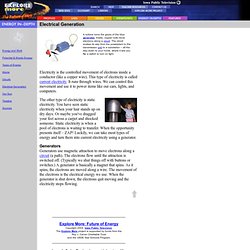 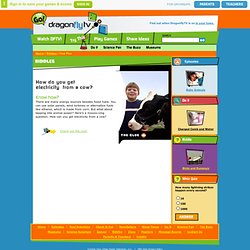 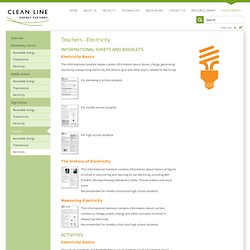 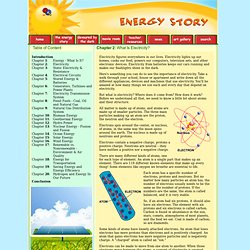 Electricity lights up our homes, cooks our food, powers our computers, television sets, and other electronic devices. Electricity from batteries keeps our cars running and makes our flashlights shine in the dark. Here's something you can do to see the importance of electricity. Department of Energy - Study Guides and Activities. A Toolkit for Teachers and Parents Thank you for considering fossil energy education in your classroom curriculum. 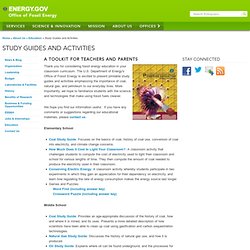 The U.S. Department of Energy's Office of Fossil Energy is excited to present printable study guides and activities emphasizing the importance of coal, natural gas, and petroleum to our everyday lives. More importantly, we hope to familiarize students with the science and technologies that make using fossil fuels cleaner. We hope you find our information useful. PBS Design Squad Teacher's Guide - Electricity. Circuits and the Flow of Electricity Lesson Plan. The Blobz Guide to Electric Circuits. Science - Circuits and Electricity Teaching Ideas.

Everything in the universe is made of atoms — every star, every tree, every animal. Energy Kids - Electricity in the U.S. File Scrub 1 ::::: EE ... electricity_in_the_united_states-basics Electricity in the U.S. Basics Most of the electricity in the United States is produced using steam turbines. A turbine converts the kinetic energy of a moving fluid (liquid or gas) to mechanical energy. In a steam turbine, steam is forced against a series of blades mounted on a shaft, thus rotating the shaft connected to the generator. In steam turbines powered by fossil fuels, such as coal, petroleum (oil), and natural gas, the fuel is burned in a furnace to heat water in a boiler to produce steam. Electricity Science Projects and Activities. R.E.A.C.T. - Renewable Energy Activities - Choices for Tomorrow - Teacher's Activity Guide for Middle Level Grades 6-8. HowStuffWorks - Electricity.

Humans have an intimate relationship with electricity, to the point that it's virtually impossible to separate your life from it. Sure, you can flee from the world of crisscrossing power lines and live your life completely off the grid, but even at the loneliest corners of the world, electricity exists. If it's not lighting up the storm clouds overhead or crackling in a static spark at your fingertips, then it's moving through the human nervous system, animating the brain's will in every flourish, breath and unthinking heartbeat. When the same mysterious force energizes a loved one's touch, a stroke of lightning and a George Foreman Grill, a curious duality ensues: We take electricity for granted one second and gawk at its power the next. More than two and a half centuries have passed since Benjamin Franklin and others proved lightning was a form of electricity, but it's still hard not to flinch when a particularly violent flash lights up the horizon.